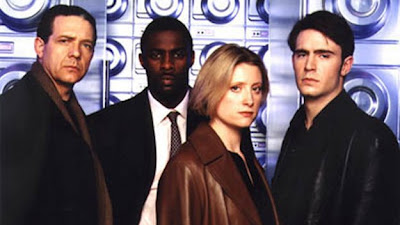 At a Catholic school, a priest questions a school child, Gary, who forged a note to get himself out of the prayers, claiming to be allergic to the incense and the smoke. The priest asked what changed but the boy just demands to be left alone, that he doesn’t want to be forced. The priest touches him and the boy draws a knife and stabs him before running out of the school.

Angela has her own little family drama with her own daughter and receives a letter; some test samples she’s sent off for Father Harman have come back as “consistent with a non-hodgkins lymphoma” which I think, by her reaction, means cancer. She goes to work to tell him but he’s already left for the mortuary to see the priest who was stabbed.

The boy has left the school and removed the obvious identifying elements of his school uniform and tries to wash the blood off his hands – he squints painfully in the sunlight.

At the mortuary Angela doesn’t understand why it would be a case for them – until Harman shows that the priest had multiple stab wounds and the 12 year old boy who did it had no history of violence. Angela still doesn’t see how they can assume “code 5” involvement, but Harman says the boy was considering the priesthood.

Vaughan and Mike question the other kids and during the questioning Vaughan opens the blinds, several students flinch away from the sunlight. Vaughan is all “this is vampires” but Mike, whose being a cop, doesn’t think it takes vampirism to make a kid an evil little bastard. Vaughan raises the sunlight sensitivity, Mike points out that that’s a diagnosis for meningitis. Angela takes issue and assures him that no-one’s leaping to conclusions so make sure he doesn’t (which makes no sense – he isn’t leaping to conclusions. He’s stopping them from doing so).

In the park, the boy, Gary, is found by a man who brings him home (for nefarious purposes it’s heavily implied). His dog starts barking furiously the minute Gary enters. The dog gets more and more aggressive before attacking Gary. The man dumps Gary at a hospital before running out, going home and dumping his pornography in a black bin bag – it’s hard to tell what it is but I’m presuming paedophilic. He burns it.

At Gary’s mother’s home Vaughan and Mike question her while searching the flat. She says she was relieved that Gary had dropped out of the religious activities, saying it was his father’s idea in the first place. He’d never been violent but was showing sunlight aversion. She says the only social activity he had was choir practice

At the school, Angela examines one of his classmates and finds him not light sensitive (not to electric light anyway) but he panics and is almost in pain when asked to open a Bible. She has the whole school closed and the students sequestered as a ”public health issue” and Mike is furious about the extreme draconian power she uses with so little evidence. She does take some of his complaints to heart and she takes spinal fluid samples. She also does UV light testing on their necks and finds nothing

Mike, meanwhile, is looking at other potential options and questions the football coach about whether the dead Father Downey was a paedophile. The coach says no but Mike searches the priest’s house and finds a computer disk (soooo dated!) and finds some compromising images (which, naturally, they don’t show) of Gary.

He takes the pictures to Father Harman who decides that, since there’s no evidence of Father Downey downloading the pictures, there’s nothing to connect them to him other than them turning up in his house. Which is a pretty huge exception to the idea of “nothing”.  Mike is angry that they won’t turn this other to the police, instead deciding to keep the evidence quiet and deciding to investigate themselves (in episode 1 they already confirmed that they’re not very good at investigating). Mike’s extremely irritated by this, especially since all of these potentially abused children are being forcibly separated from their parents. Angela finally concedes that’s not a good idea since it will draw the media. But Gary still has to stay and Harman is far more concerned by Downey’s reputation than the potential harm to any children (they got that realistic at least!)

They follow up on where Gary was attacked – there was no blood in the park and no-one noticed a dog attack. Vaughan asks if they’re chasing paedophiles or dogs – and Mike says both – and they decide to cf to find paedophiles with dogs.

Angela questions Gary about Father Downey and why he makes Gary sick. When Father Harman enters Gary starts to panic and ask him to go away, Harman ignores him and continues to aggressively question him until even Angela draws the line.

Angela is torn at the idea of vampire infection with no penetration, no feeding which normally infects humans and makes them pliable. They speculate it’s a new form of biowarfare to make the masses more pliant. And it’s time for Angela to give Harman his diagnosis. He takes it calmly, better than her, and they discuss treatment and chances while she dodges giving anything concrete or pessimistic. Meanwhile, Angela’s daughter is giving her the cold shoulder because Angela’s refusal to let her out at night is severely restricting her.

Vaughan and Mike go to interview the paedophile, Colin, with his dog. Colin dodges round all the questioning but Vaughan isn’t having it and grabs him by the neck. The dog reacts and Vaughan kicks it and sends it whimpering out the room. Vaughan tells them they’re not cops and don’t have to play by the rules and starts hitting Colin to make him co-operate. Mike looks away, silently. Colin doesn’t recognise Father Downey but does say he gave his pictures to a man that his dog also barked at  - though the dog was much more scared and he had a “skin allergy” that prevented him going out during the day.

They go to the address, find more tapes – and a man brings home a boy. Mike looks at the tape Vaughan’s watching of the room and sees it empty, not realising it’s a tape, not a live record he assumes that the man isn’t showing up on camera and shoots him. The boy he’s with definitely doesn’t show up on camera – and tastes the man’s blood. Vaughan yells at Mike to shoot him, but he freezes.

In the hospital the man is hooked up on life support. Angela explains yes, he did have a sunlight allergy – his skin can’t repair the damage from UV and is very susceptible to skin cancer. She also speculates that the isolation this cause may have led him to become a paedophile, but Vaughan has not patience for the sob story. Mike goes home, traumatised because he shot a man, not a vampire.

Angela finishes her research and finds that the kids do have meningitis hybridised with Code V code. They infected Oliver, the man with the UV allergy, to be the perfect carrier and he, in turn, spread it on to the children. And Angela can create a cure for the children using the samples she has. Harman decides to frame Downey as a paedophile so Gary won’t stand trial for murder and the secret can be kept safe.

They interview Oliver and find how they got to him – a boy, a vampire boy. With no soul or humanity who never aged and Oliver thought he could abuse with a clear conscience. But Oliver couldn’t relive anything on video and it didn’t work for him anyway because the vampire child wasn’t a child, no matter what he looked like. So Oliver went looking for other children, real children. All of this is how Harman sums up the situation. Oliver’s justification is that the vampries are going to win anyway.

Mike asks Vaughan what it takes to be fired, but Vaughan says he’s up for “early retirement”. The shooting someone doesn’t bother him – but Mike shot him twice and missed the heart. If he had been a vampire, Mike would be dead now.

And Father Hamran talks to Angela and discusses how UV seems to be a trigger for his own cancer.

Meanwhile Kirsty is still working with a journalist who reports progress! He can’t find Mike. Kirsty is bemused to how this can be progress but he says Mike has disappeared – not just moved, but disappeared and there’s no records at all. Which confirms that Mike’s involved in something big, they just have to check his old contacts to see if he talks to any of them. And Kirsty clearly thinks of Frances, the government employee who found Mike and is still in touch with him (and Mike’s old flame).

The meeting doesn’t go to plan though and Frances is extremely unhelpful and refuses to talk to Mike for her. The journalist she’s working with manages to track down Angela’s name though – but he’s being followed. And when Kirsty calls him back from a pay phone, his mobile has been thrown away.

Frances tells Mike that she met Kirsty and that Kirsty is looking for him and warns him that she’s going to keep looking. She also tells him that Kirsty has a journalist, Jacob, working with her.

Mike goes and parks outside her house to stalk-mope, while Kirsty has dinner with the reappearing journalist, who has a whole new source who says Mike is involved with the squad. She wants to go to the police, but he insists otherwise and insists she’s crucial because he knows Mike. Unless there’s any doubt, the then goes upstairs and throws up his dinner in the toilet. He’s been turned. Afterwards he prepares to go – but then they kiss. She pulls away and says “it’s too soon.” He understands says he doesn’t want to pressure her – and they kiss again. Including lots of neck kissing – maybe biting.

Even with the vampire involvement, the way that the team utterly refused to even consider abuse – even when the evidence was found in the priest’s room – was utterly ridiculous and revolting. It’s adding to my increasing dislike of nearly all of the characters on this show, I don’t find them preferable to the vampires. The only time Harman would even consider the paedophile possibility is when it comes to preserve the secret of vampires – not to protect children.

Vaughan seems to have the least lines of any of the characters and he’s virtually carrying a “Scary Black Man” placard.

I am glad there’s some nod to the impact of shooting someone, it’s not just passed off as a reasonable mistake, it’s presented as traumatic.