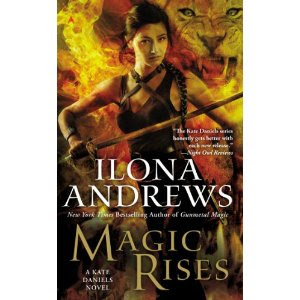 Kate and Curran are faced with a tragedy that continually afflicts the pack – children going Loup. Shapeshifter children falling prey to the Lyc virus and becoming uncontrollable, mindless killing machines. There’s only one cure – Panacea, and only a few people in Europe know how to make it. They do not trade.

Faced with the inevitable death of 2 small children – and so many more in the future – Kate and Curran are presented with an offer they cannot refuse. Go to the Black Sea and help protect Desandra, a woman pregnant with twins; both of which have separate fathers. Whichever twin is born first will win their shapeshifter group a massive reward – but both fathers’ clans and Desandra’s father are all snarling at each other.

Kate and Curran are called in as neutral third parties – with only a few guards and both knowing that it must be a trap, they cannot refuse the chance to get their hands on Panacea for the pack. But the trap is far more devious and dangerous than they imagined – and far more than those three packs know.

I love this series. And with each passing book I just love it a little more. I really cannot adequately describe just how much I love it – not without descending into the worst kind of fanpoodleness. Alas, I simply cannot!

So fandpoodleness it is then!

I love the world. I love this completely unique world with its vast variety of creatures and beings and characters. I love the incredible research the authors must have engaged in to make it this rich and deep and varied. I love the vast amount of mythology that has packed the book from edge to edge which combines to make the world incredibly real even while its uniqueness makes it vastly different from both our world but also anything in the genre.

I love the writing that can convey all of this knowledge without being boring, can make fight scenes edge of your seat exciting and can convey truly deep and powerful emotion. I love that the sense of epic and the entire world in balance can saturate a scene without going over the top and making it drag. I love how even with an excellent story and all this epic around, there’s still room for some excellent humour. It’s amazing that you can be on the edge of your seat with tension and then laugh out loud – and both of them work.

I love Kate as a character. I love that she’s immensely powerful and skilled but manages to not be a super-perfect protagonist who is superior to everyone around her. I love that, even with all her power, a large part of why people around her respect her is because of her knowledge. I like that she is respected as a leader because she has earned it and proved herself time and again. I like that she genuinely cares without being a wreck, she is strong without being callous, she is intelligent without being all-knowing, she is loving without expecting a perfect relationship

And I love the relationship between Curran and Kate because of how it has come to subvert all of the Alpha male rubbish we see so often. Curran loses his shit and starts roaring and breaking things? Kate looks on, completely and utterly unimpressed. Or she gives him a rock to throw. He’s being his scariest, most intimidating, most horrifying and she’s just sat there “yeah, let me know when you got it out of your system”. It’s epic and so perfect.

This book just takes it all and goes that extra mile. The world was always rich and amazing – but now we’re seeing how the world exists outside of the small part of America we’ve seen, how the world and magic waves affect different countries and how things are done in different places. These are grand differences with new mythologies to help develop the world and, at the same time, bring a new insight to what we’ve already seen (like how rare mixed-species packs are, or how unusual Kate as a human consort is). But there are also wonderful, small inclusions that just really deepen the world – like how shapeshifters are immune to some venoms but not others – and why. Or Curran scoffing at the idea he ENJOYS hunting – yes he’s a shapeshifter, but he’s a male werelion! Male lions don’t hunt and how can an ambush predator of his immense size possibly catch a deer? Or having to research Greek myths if you wish to cross the Mediterranean and the Black Sea, since they've all come real with the magic waves. Or powering ships with Sea Shanties. Or even the introduction of other great powers, on par with Roland. There's just so much here.

The relationship goes through a rocky road this book – but it is all handled in a very realistic, very meaningful manner that helps underscore the reality of being in love that it isn’t always perfect. There is Kate surrounded by people who are constantly insulting and demeaning her relationship. Of course it hurts – and then there’s Curran playing up to it. Kate is hurt and angry – but behaves with incredible class, restraint and even trust towards Curran even as he not only stretches the line but shoots past it. Her characterisation throughout is excellent – not so saintly perfect as to not react, but nor so spunky or emotional that she tore the whole plot down around them out for revenge and finished off with a firm “I’m not putting up with this, you were out of line” handled in an excellent tone. It was relationship drama as it should be.

The plot itself was an excellent mystery with many questions and suspicions from the very beginning. There were so many threads to follow, so many motives and such a lot of behind the scenes plotting that ended up with several major surprises that made me gasp at my tablet. I think the villain was truly perfect and has really managed to bring home the power of what Kate faces, the subtlety of it, its attitudes and the sheer strength it begins – while also showing the strength and potential Kate has in her. Definitely a believable villain, definitely a worthy villain. I look forward to Kate chopping him into teeny tiny pieces. If I have any complaint, then it’s that the villain emphasises how little Kate has tried to develop her own powers, which I’d like to see more of.

As to marginalised people – again the book is excellent. Not only do we have Kate as an excellent female character as mentioned above, but she is fully backed by equally strong characters like Andrea and Aunty B. Even the woman they were guarding, Desandra, was wonderfully portrayed – dismissed and slut shamed, treated as an incubator, she showed cunning and cleverness that was completely unexpected and really well conveyed. And, of course, the ending had me cheering for her.

Kate and Currant took 11 people with them (it was 10 but Dr. Doolittle said he was coming and arguing with the werehoneybadger is just a bad idea). Of those 11, 6 of which are POC, which is pretty substantial representation, especially when we add Kate as well who has gone from implied to very much outright stated POC. I hope as well that some of these characters – like Kiera and George – will become regulars in the same way Jim and Doolittle has. Especially Doolittle, because Dolittle is supremely awesome.

We also have Barabas, the series’ main (well virtually only) gay character. I like him, he’s dramatic, but he’s also capable and dangerous. But he’s also Kate’s “nanny” and has a job that literally revolves around serving Kate. It’s a close line between “loyalty” and “gay servant”.

With Kate’s secret open to nearly everyone now, I think we’re also going to see some excellent development over the next few books. I hope it comes with Kate also developing her own powers and magic – there’s no reason why she should be limited to the words of power and so few of them especially after seeing the villain use magic so handily.

This is one of those books where, the minute got my hands on it, it moved to the top of my priority list and everything was dropped. I then sat down with the book and read it – none stop, cover to cover. No stops, no breaks, no delays. Interruptions were not tolerated, sleep was not permitted. I had to finish it before I could even think of doing anything else

With a series like this, I often approach a new book not only with excitement but also fear. Will this be the book where the author drops the ball? Will this be the one where they get it wrong? And I’m afraid because I want something as perfect and wonderful as the last book was and couldn’t stand to be disappointed. So far, this series hasn’t even come close to disappointing me. But the wait for the next book is going to kill me.