Hearts in Darkness (Nikki and Michael #2) by Keri Arthur 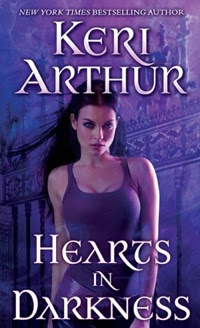 Nikki has been apart from Michael for 6 months, 6 months while Michael slowly relearns to control his hunger and 6 months when Michael resolves to stay away from Nikki. His life, his world, his job is just too dangerous for her and he is determined to keep her safe

Unfortunately for him, one of his jobs coincides with one of hers – she has another missing teenager and a lost contact’s family member, neither of which she is willing to ignore and she’s certainly not going to leave it because Michael asks her too

They are thrown back together in an exclusive resort trying to find a slew of missing people – and finding surprises both magical and personal waiting for them and an entire species depending on them for survival.

After the last book, I was a little dubious about this series, I was still waiting for something more unique to happen to set it out. While the character interactions pretty much fit some very long established moulds, the plot of this book broke out of the tropes. We had some completely new creatures and a twisty plot line that made use of them in a pretty new an interesting way that lead to a pretty original story and definitely one that could not be entirely predicted since so much was hidden and hidden well. It was a plot that had elements I have not seen elsewhere and put the series on my mental map as a unique creation with its own exclusive items that are both intriguing and fascinating – and make me want to read the next book to see where the author’s imagination will take me next and how much further this world will expand

This world is still played very close to the author’s chest. In some ways I like this – like the first book the writing style is pretty well handled in terms of descriptiveness. I don’t think the fight scenes necessarily work brilliantly, often giving me the feeling of people queuing up for battle and a few anti-climaxes, but they do work well. We do have some overly emotional monologues but, again, they’re pretty restrained to what I’ve seen elsewhere and even in the first book. The writing is careful, it has hiccoughs but they’re slight – it controls description and unnecessary exposition though I have to say I would like a little more world building about vampires and the organisation Michael works for. But the fact the hints encourage me to learn more is a good sign in itself.

There is also a considerable improvement in the relationship between Michael and Nikki. Now, it isn’t perfect, but a lot of what isn’t perfect is also challenged, at least to a degree. I’ve said before a hundred times how much I hate rushed relationships – and Nikki and Michael lamenting how they cannot possibly live without one another despite only having known each other for a week is definitely rushed. I just never get the sense of foundation to this relationship. Even Michael lampshades it with this line:

“We barely even know each other. We may share thoughts and we may share passion, but we have never once shared our dreams or our desires for the future. I don’t know your favorite movie or color or food or even what you like to read. And you know as little about me.”

I cheered when I read this line. And I cheered that Nikki was talking about finding these out –because that would be great, them deciding they have good potential and it would be worth seeing if they could build a relationship and develop it further. I was on board for that, even with Nikki angry because Michael wouldn’t try to see if they could have a relationship.

They both say the words – and the lack of experience with each other is used to justify Nikki’s jealousy because she does realise they have no secure relationship. The jealousy is another element of the story that is handled pretty well. Nikki is jealous, she recognises it, she even seethes with it – but she doesn’t do anything ridiculous based upon it nor is her jealousy completely unfounded.

But I do feel that the whole “we don’t know each other” was something of a token protest – since without addressing any of those points they do fall quickly into the “I love you and can’t live without you ever!” track.

Michael continues to be extremely “protective” to the point of patronising and paternal to Nikki. He tries to send her home because it’s all too dangerous for her delicate self. He’s always asking her to stay in the room or stay safe while he marches into danger. His whole reason for not pursuing a relationship with her is that he couldn’t possibly expose her to such terrible, dangerous darkness (despite the fact she has hardly lead a sheltered life). It is pretty aggravating to say the least.

But, on the flip side, Nikki is much less spunky this book so she doesn’t undermine her own agency. She continually challenges Michael’s protectiveness – without actually deciding to do something foolish or borderline suicidal to prove how big and tough she is. She is injured and he does help her – but she helps him as well, including saving the say. In particular, I liked that her powers were essential tools in this story while, in the last book, they were more wonderful assets that other people coveted (and, therefore, coveted her) rather than weapons in her arsenal. In all, it means that Michael still kind of annoys me – but he’s learning and changing as Nikki challenges his constant desire to put her in a locked room to keep her delicate fragility sheltered and protected. It also means that Nikki has grown and I don’t dislike her any more. Most importantly, both characters are now showing considerable potential that they didn’t have before.

Unfortunately, for all these improvements we still have zero POC. We do have a lesbian - one of the kidnapped victims who was seduced and kidnapped by another woman - that woman is a depraved predator. It's not a big role and the villain certainly doesn't make it a positive one

In all, I think this book has several elements that the first book sorely lacked. It introduced the world in a much wider stance, added some texture and depth to the characters that were pretty generic and completely overwhelmed by tropes and it gave me a lot more hooks to actually want to continue with the story. I’m really, pleasantly, surprised and feel more of this development could have done to have been in the first book.

An ARC of this book was received through Netgalley
Posted by Sparky at 3:00 PM