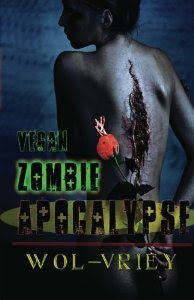 I’m not even going to try to summarise this book – or, rather, summary will be part of the review. It’s just so random and bizarre as to defy description.

But I’m not a big fan of random stuff bring thrown together for the sake of it being random. A book with oddness works for me, a book that seems to be cobbled together from weird fever dreams is likely to lose me unless it has something underlying it.

This book crossed the line to just being random for the sake of it. But it didn’t do that through the story. There was a story there – a truly bizarre story of a post-zombie apocalypse. A story of humans gets as living fields in which potatoes the zombies rely on to keep themselves conscious and capable – humans little more than cattle, slowly dying without names – that’s amazingly original. Zombies that actually explode on contact with human brains – I love it. The strange post-apocalyptic cult of humans that consume zombies in accordance to the bizarre tenets of their gods. Both zombies and the cultists hunt the ever-dwindling supply of the free humans

We have an escapee from one of the human farms and a heretic from the zombie-eating cult, meeting up in the wilderness, both hunted by their respective groups but perhaps, together, able to create a new future.

Then we get the Lemon Tree to the misspelt heavens, a meat deity and zombie-eating brains (no, really, that isn’t a mistake) and super dinosaurs and werezombies and super heroes and the Sun doing something even more odd and terminator zombie and… ye gods I have no idea. It’s at this point where a potentially awesome story is well and truly drowned under all the extra wackiness that is shoe-horned in whichever way possible. I feel the author tried too hard to make this story so different that throwing in weird stuff took precedence over everything else. It was less a story to be told and more a public declaration of how very weird and quirky it (and the author) is.

But, while that would have disappointed me, it wouldn’t have been all bad. What did break this book for me is the attempt not to be quirky – but to be “edgy” as well. Which means lots of gratuitous language and scenes in an attempt to… what? Disgust me? Offend me? Outrage me? Shock me? Impress me? I don’t know

I could go on because there was much much much more – but collectively it leaves me feeling not disgusted, offended, ourtraged, shocked or impressed – but rather tired. The most powerful feeling I got from reading this book was of a child trying to sound impressive by using swear words – or people trying to gross you out by posting links to shock videos like “2 girls 1 cup”. I think I’m supposed to be shocked and disgusted but I’m not – maybe I’m just too jaded, but I think this book is trying really really hard to shock me. Far too hard. It feels a little childish, to be honest. Aren’t we a little old to be impressed by people using naughty words and describing disgusting things in a graphic fashion?

So, in all, this book doesn’t work. I kept reading it less out of any real interest and more out of morbid curiosity over what weird thing the book would pull next, all coupled with an ongoing dislike of the book’s attempt to shock and horrify me and a disturbing obsession with bodily secretions. It’s a shame, because there was a core there that had potential (which is why I haven’t given this book 0.5 fangs) but it was drown  under a desperate need to be bizarre for the sake of bizarre and then stomped down under an equally unnecessary need to try and play gross-out with the reader.