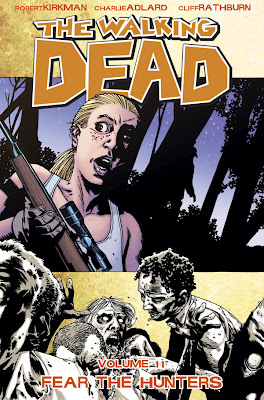 This week, the group continues their movement towards DC to, hopefully, reverse the zombie apocalypse. Along the way they are dogged with tragedy - including the death of Billy at the hands of his twin brother Ben, the child not understanding death in a world where the dead rise again. Handling a child murderer who doesn’t understand murder is a heartbreaking test for the group.

Again, the group is faced with hard choices and debates what they must do to stay safe; one that seems more poignant with the addition of Gabriel, the moral preacher to the group. And they have more choices to make when the group is attacked by cannibals

On the whole, I do not think we had a new theme introduced this week so much as we had last week’s theme continued and polished.

Again we have a continued analysis of what the apocalypse and constant danger does to people - in particular reference to how it breaks down their moral rules and flips the “switch” inside them, separating people between those who will kill to survive and those who won’t - and therefore die.

Can there be a clearer representation of killing to live than the group of people who have resorted to cannibalism? They hunt and kill people to survive, this is the ultimate line of killing for survival, the ultimate switch.

Among the group we see the same extremes - perhaps the clearest is Carl killing Ben; Carl does what has to be done in his eyes, regardless of who he has to kill, even another child. He sees the rest of the group being unable to make the hard choice so he does it for them. It is his ultimate switch, the death of his childhood and him standing up clearly alongside Rick and Abraham as a ruthless, group protector - but also joining them as a figure that is broken and even almost tragic in their callousness.

That callousness caused by the “flipping of the switch” is also shown in this volume. Abraham is completely indifferent in the face of people’s loss, almost contemptuous of Andrea’s grief and dismissive of any attempt to find and help Dale. Carl outrages Rick with his own indifference - and even outright contempt for Dale as “dead weight”. Carl has developed his own ruthlessness to cover what he has been done

But there’s also some representation of the cost of this - these people are not naturally callous or unfeeling. Abraham buries his pain - which is occasionally evident in his private moments with Rosita - but focusing on getting to DC and saving the world. He has adopted an Ends Justifies the Means mentality to help him maintain his ruthlessness which does have a cost to him; though his end goal is so vital it will make everything ok. Carl, after killing Ben, is frequently shown grieving and in pain from what he did, even while he maintains a public face of callousness and contempt. Both are, in a way, hiding from their own pain or suppressing it to keep those switches flipped.

This cost is partially recognised by Rick praising Dale for not flipping his switch, for holding on to who he is and his principles even in the face of dire provocation. But this is heavily countered by both Dale’s praise for Rick leading them and keeping them all alive as long as they did - and by the presence of Gabriel. Gabriel has maintained powerful, hopeful, compassionate convictions - but he maintained them by hiding behind church walls while his congregation became zombie snack food.

Rick may admire Dale’s humanity - but Dale was only able to maintain that humanity by hiding behind Rick, just as much as Gabriel maintained his by hiding behind locked church doors. Dale and Gabriel’s humanity is a luxury preserved because Rick was willing to sacrifice his. Rick didn’t see this and wistfully wishes for Dale’s integrity - but Dale, at the end, saw that Rick’s sacrifice was what kept them alive.

Of course, part of this is that these characters are definitely “alpha males” and both our societal understanding of masculinity and the way that masculinity has been presented in these volumes shows Alpha Men do not get emotional, show pain, fear or grief; they repress (or talk to telephones). The women can be emotional on The Walking Dead and men who are seen as less masculine can to a lesser extent - like Glen. But the only emotional outburst most of the men are allowed is anger - be it Hershel kicking Rick from his farm, Tyrese and Rick’s fistfight, Dale ranting about Rick and Abraham rarely seems to feel anything else than anger - they have a limited emotional range, only rage is allowed.

I would have very much liked to have seen more of Michonne - the other character’s whose “switch was flipped” to get her perspective but she is similarly unemotional. We did have a hint of some trouble in her almost joking snark about how Andrea wouldn’t want a sword because people would keep calling on her to kill things, guard things etc. It was a joke, but there were also many points in this volume when a character, confronted by a zombie, would say “Michonne” and she’d step forward. While this may not be necessarily indicative of her going through the same emotional pain (though her own talking to invisible loved ones suggests it is), it certainly shows her dehumanisation to becoming a weapon to protect the others. She is also a wall behind which the non-combatants get to shelter and maintain their humanity.

In terms of issues, Michonne and Andrea continued to be 2 of the combat monsters of the group. One low key but powerful moment was Andrea fighting up close - she lost the distance that being a sniper put between her and the violence - which is a major step forward to put her with Michonne in this; especially since the series began with women not even being trusted with weapons. Michonne also remains the tactical brain of the group - others worry about lack of supplies, she sets up rationing.

Michonne also talks to Rick about developing feelings for Morgan. I love that Michonne and Rick are continue to bond and these two are very solidly shown as friends. However, and particularly looking ahead, it is discomforting that Michonne will latch on to any Black man who comes along (especially since Morgan has hardly shown much in the way of attractive qualities yet). Also, Michonne was the victim of a brutal, horrific rape and that has never been addressed nor has her healing been shown, but now we see her soon after pursuing a new relationship with none of this being resolved or covered or even referred to. We have seen no effects from this experience (her talking to her ex-boyfriend happened before the Governor) - the whole rape has been completely ignored; it’s as if it never happened which is a terrible way to handle so sensitive and powerful an issue.

Another interesting issue that was covered was Andrea talking about her relationship with Dale, addressing how it started and her emotional connection to him. She addresses the age difference and how that has hurt them due to Dale’s insecurity and expectations of agism - it was beautifully subverted
And, a last issue we have to mention is Eugene. Often the intelligent “geek” character in Dystopians are shown to be somewhat dead weight - an emphasis that skills we need today are going to be largely useless in an apocalypse (I, personally, intend to be zombie food and reincarnate when society can again produce lattes I can order over the phone). But Eugene, with his trivia, his inquiring mind and healing skills is a surprising asset, subverting this trope.