Shrouded in Illusion by H.D. Thomson 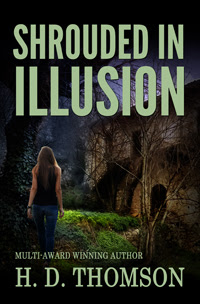 Skye has come to Las Vegas in a desperate quest for answers – answers to fill the gaps in her memories, answers about who she is, where she come from and where she got these odd psychic powers she has.

And answers that may tell her who is targeting her son.

In Vegas she finds David – with the same holes in his memory, the same origins and the same odd, unexplained powers. Together they may be able to find some answers – but the past is catching up with her and her enemies are getting closer.

This book surprised me considerably with its twists. And it’s not often that happens. For a long time I thought I knew what was going on – and I was wrong.

I thought I knew what Skye’s powers were – and  turned out to be very wrong.

I thought I knew why she was on the run – and, again, turned out to be wrong.

I thought I knew her past and the source of her powers and the cause of her flashbacks – and I was wrong.

I didn’t even know why one of the characters was chasing her – and all of my guesses were completely and utterly wrong on that score as well.

I’m not usually that wrong – and I hasten to say it’s not because the book set out to deliberately mislead me. There was plenty of ways I could have guessed correctly, there was no deliberate bait and switch – but it had left enough up in the air for me to make wrong assumptions and leave the ending a mystery.

The writing was generally well done – lots of hints without dropping huge amounts of information but also without making it feel like the book was being ridiculously or convolutedly cagey. There were never times when information was withheld in a way that didn’t make sense. And the multiple red herrings along the way were perfectly crafted. It was a little long and slow in places, especially when it comes to emotional introspection, but it generally worked, particularly for a mystery with so little leads to go on.

I liked Skye as a character – she is dedicated to her son, but she isn’t finding answers just for him, she wants to know for herself as well. She is hurt, she is vulnerable but she’s also incredibly strong. I love that her strength isn’t based entirely on her special woo-woo or super skills. The core of Skye’s strength is her reserve, her willpower, her determination. Her ability to walk into a room and command it with her excellent poise that is intimidating in its strength. I love her determination to live her own life and reject bossy, controlling men:

“She’d got used to being her own boss and in charge of her life. Me, not having some man tell her how to run it. Granted, her life was a mess at the moment , but it was her mess”.

She also shows surprising common sense. There’s a classic scene in the book where a complete stranger, possibly an enemy, approaches Skye and tells her that David cannot be trusted and there are dark evil secrets in his father’s past. In so many books we’d then be treated to several chapters of Skye keeping dangerous secrets and not trusting David. Skye passes the information on – she’s not going to stop trusting an ally who has never been false with her because some random stranger with unknown motives shouted dire and vague warnings.

I also like how she addresses her ex-husband – both from a place of strength but also recognising that, because he was a cop, she has little recourse against him. Her acknowledgement of the problems of police solidarity even when a cop is in the wrong is well done.

I can’t say I was a fan of the romance. I’d actually have been a lot happier if Skye and David came together over mutual curiosity about their past. As it was we had pages of them meeting and then insta-love hitting. Insta-love turned into a lot of obsessing what each of them looked like. I could take him following her because he had every reason to be suspicious of her so I don’t include that trope – but they still go from complete strangers to “I can’t be without you” in an astonishingly short amount of time. He also develops a classic case of the protective alpha male, wanting to keep her safe and protected; which I really don’t like considering she is the one who set off on this quest, it’s to protect her son and to find answers that he was quite happy to ignore until she came along. Similarly, I’m not fond of the first sex scene which involved a reluctant Skye (not because she didn’t want to – but because she had other duties, she had to focus on her son, etc) and a pushy David. Such scenes never come across as romantic to me – sure we can see into her head and see the reason for her reluctance, but he cannot – all he knows is she’s hesitant and needs coaxing – which means it shouldn’t happen.

It’s not like the love or the sex or the relationship at all was necessary. They had a very real mutual motive to follow the plot through, sure the love interest made David more personally involved and give him more of a reason to pursue answers he’d avoided for so long – but the fact he meets a woman who has the same psychic powers as him and they both come from the same place? Shouldn’t that be motive enough for anyone to want to seek answers?

The book was, as far as I recall, completely erased of minorities. Though there weren’t a lot of named characters in it either

The ending left a lot to be answered opening the door for a sequel; I did kind of feel like there was a switch at the end. There was an enemy who had all the answers and may have opened up a lot of what happened to Skye, but at the last minute was replaced by someone who was a whole lot more ignorant and had a much more personal motive to bring Skye down.

All in all, it’s a good book. I liked reading it, the main character was definitely someone I can get behind. It amused me while I read it but the plot, though interesting, didn’t have zing. I get the feeling there are going to be future books in the series – but I have no hooks. The world isn’t bad – but since all I have is “human psychics” nor is it grand enough to pull me in. The immediate threat to Skye and her family is over, there’s not a lot hanging for book 2.

It’s definitely worth a read and Skye alone is a character worthy of note and emulation, but it needed to open up more for me to be enthralled.