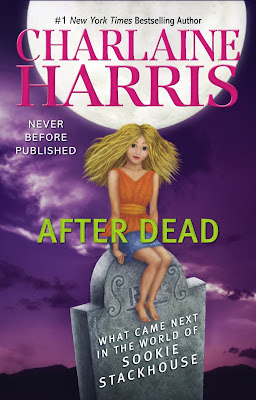 When I got this book I was surprised by its length, I expected a short story not about 200 pages

Then I started reading

Most of those pages have a paragraph on them. A short paragraph. Sometimes just a sentence. None more than 2 or 3 paragraphs

Each page tells us about the future of various characters that have appeared in the Sookie Stackhouse series. Allegedly

I say allegedly because some of these characters I don’t remember. Some were utterly obscure and so many of them were just so damn minor I cannot imagine even the most obsessive, die-hard fan giving a damn about them.

Can anyone honestly tell me they’re even vaguely interest in the future of Alcide’s dead dad’s former secretary? Anyone?

What about Christian Baruch? Who? I have no damn clue. He’s a hotelier, apparently. Is there a reason I’m supposed to care?

The insurance agent in Bon Temps? Anyone care about him and his family? Noooo…?

Seriously we have pages and pages and pages or really obscure pointless characters, each with a little line denoting their future that we have zero reason to care about. It’s an entire book of padding

And of the characters we actually care about, no-one actually has an even vaguely interesting future. Bill, Sam, Pam, Sookie, Eric, Jason? Just say “and they all lived happily ever after” it would have saved people buying this dreadful money grab of a book.

Oh, except the odd character who clear has “potential new series” written all over him – right Barry the Bellhop?

I literally have a full page of notes (I always take notes as I review) that says nothing but “who cares?” and “who is this person?”

Except for one entry where a character who was generally beloved in the books just has a random tragic death tagged to them for no damn reason other than to try and stop everyone good having a trite happy ending. And another note that is positively bemused that one character’s future is:

…okay then. I have no idea who Harry is and even less why I need to know about his sexual health. That’s it – a whole page with just those words at the top. Is it some kind of strange performance art?

This book is a hot mess. It’s pointless. It adds nothing to the series, nothing to the characters and is the grosses money grab I’ve ever seen in a book. This book exists because the publisher/author/whoever decided they could still squeeze some more pennies out of a loyal fanbase without even a slightest pretence of respect for that fanbase. It’s rare for a book to actively annoy me due to fan-treatment since I usually have little sympathy for fan drama – but this book annoyed me.

I'm also irritated that, having already given the last horrible book 0.5 fangs, I don't even have a fang rating low enough to rate this one. I am tempted not to rate it at all, to rate it is to imply it is a book. It isn't a book. It has no story, no characters, little coherence and nothing of any value within. It is almost embarrassing to review this waste of words because it gives it more respect than it deserves. Perhaps I need a new rating - a form of shunning where we never ever speak of it again and pretend it never happened in the hope that this pretence of literature will fade from the world like a bad, substanceless dream

Alas, I need a rating and I did finish this wannabe-book so I am left no other choice than a wholly inadequate 0.5 Fang

(And that's an insult to the other 0.5 Fang books. Whatever their faults, at least they ARE books)
Posted by Sparky at 3:00 PM