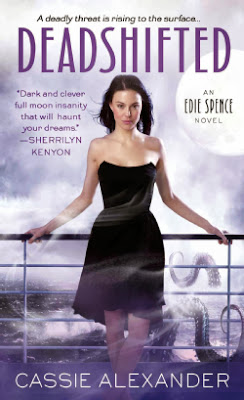 Edie and Asher are getting away from it all with a cruise. A nice, relaxing cruise.

But the supernatural came with them – Asher recognises a man from his less-than-respectable past and nearly risks their relationship to try and salve his conscience.

And then people start getting sick. And then they start dying… Then it gets truly horrifying.

I really liked the plot of this story – it was part medical mystery, part detective work, part survival horror – all melded together into an excellent whole. There was also a really strong emphasis on that horror with massive amounts of tensions and considerable grisly and gory scenes. I don’t mean in a gratuitous manner, the book didn’t try to shock the reader with endlessly descriptive scenes of blood and guts and mayhem – but it didn’t sanitise everything and the raw realness of the situation they were in, the horror of it was really well conveyed. In fact, while the nastily mutilated corpses were horrific, they weren’t nearly so much as the rows and rows of dead, the despair of the grieving  and the growing shock of what was actually happening. The horror of the loss and human reaction was more compelling than the mere horror of the mutilated corpses. I really can’t praise enough how well done this was; scale of it was conveyed in a way that is really rare to see in books (at least for me, I’m more visual than that).

The pacing is excellent - not so rushed that it becomes an action film but not so slow that the tension of the horror fizzles and dies.

I’ve always loved the world building – the different beings in this world come from a unique perspective because it’s all viewed through Edie’s lens. There’s little romance in it, little fluffiness and little regard of them as sexy or special or shiny – they’re dangerous, creepy and disturbing in so many ways and that is never forgotten

The authenticity of Edie as a nurse is always there – and that’s something I really appreciate about the series. Many times I will read a book and the protagonist will describe their profession and… I’ll just not buy it. Or it will sit awkwardly on the character. Sometimes the author knows too little about the profession, or the character feels too under qualified or ill suited to the profession or the profession hasn’t truly integrated with the character leaving me saying again and again “wait, isn’t she supposed to be a cop/detective/astro-physicist/circus performer?” While Edie is a nurse. It’s a major part of who she is and informs her decisions and viewpoints. Whether that’s her compulsive handwashing, her medical knowledge or her fear that she may be tarred and feathered by the nursing community for the cardinal sin of dating a doctor. The whole realness of Edie’s profession – and the author’s medical knowledge – makes the character herself so much more realistic and tangible. She feels like a full person, a full character.


I also like her relationship with Asher in that it isn’t all sunny. She loves him, she cares for him – but he has faults and he has a past. She’s willing to overlook that past and move on for their own happiness and recognising that he has changed – but that comes with an understanding that he will change and won’t try to go back. She gets angry when he’s overly protective – while, at the same time, not being ridiculously reckless (reckless, yes, but not ridiculously so) just to prove how strong and capable she is. She gets angry with him when his need to dig up the past puts them in danger, and she gets angry with him that he risks his life and sanity when he tries to use his old powers. It’s a real relationship with its ups and downs, even if those ups and downs are caused by supernatural influence.

Part of the reason it works is because Asher is a very real character as well. His concerns are tangible – he used to live a very carefree, immoral life free from self-reflection or long term concerns. He never expected to live long, as a shapeshifter he expected to become hopelessly lost in the visions of his past lives. Now he’s been saved from that fate he has to confront what he did in his carefree past for the sake of his now active conscience. It’s one thing to decide to move on, but just forgetting the terrible things you were part of, especially when you see a potential way of making up for it is not so easy. Asher’s path for redemption and that redemption possibly getting in the way of the relationship is a pretty unique element that adds an interesting angle to their relationship.

I loved the nice old couple with their little secret – they were several kinds of awesome and proof about not underestimating anyone.

The predominant active characters – Edie, Asher, the old couple and Rory, a guy who joined them, were all straight and White. There are a number of POC around the ship though – one of the ship’s doctors, an Indian family, a Latino entertainer and several others. The ship’s doctor is assumed to be Muslim and scathingly disapproving and judgmental, which feels like Edie making some big assumptions; but then she’s also very sympathetic to those assumptions and how utterly frustrating it must be to be providing medical treatment on a ship where most people will be suffering only from over-indulgence.

We have a couple (well a man and his recently deceased friend) I’m nearly 80% sure is meant to be read as gay. They’re drag queens, entertainers and very good friends. And friends is the operative word because they’re never labelled as more than that. I’m not saying that in the context we should have had a grand coming out moment, but someone grieving over their dead loved one could have easily said “we’ve been together for X years” etc, rather than the “friend” word over and over. There seems to an allergy towards using actual GBLT labels in Urban Fantasy and no shortage of what I call “loophole portrayal”. A character that is 80% clear as being GBLT (though even that often rests on stereotypes) but they never overtly say it or leave enough room for (slightly im-)plausible deniability.


This book is one of the few where we find ourselves torn. While Sparky loved the book, as indicated above, Renee didn’t buy the romance and felt that Edie has become far too dedicated to Asher too quickly, was not sold on the horror themes at all and found Edie’s willingness to sacrifice herself for the sake of her zygote so quickly to be character breaking in its ridiculousness. We are going to aim for a fang rating between Renee’s 2 Fangs and Sparky’s 4 fangs.