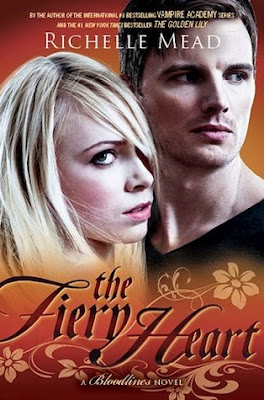 Sydney has an endless list of tasks to juggle; her friends, the Moroi, her relationship with Adrian, her continued mastery of magic as well as helping Marcus and his friends escape from Alchemist control. All of this while trying to keep it all secret from the Alchemists and trying to pretend she still tows their narrow, bigoted party line – made all the more difficult by her sister turning up. And her parent’s divorce – and the custody battle over Zoe where everyone expects Sydney to support her father.

Adrian has his own battles – he’s trying to get his life together and trying to help the Moroi with their spirit investigations – but the toll spirit is taking on him grows and can no longer be ignored. The pressure is risking his relationship with Sydney and he has hard choices to make on what to give up.

Sydney is an excellent fully rounded character. She is fiercely intelligent, incredible, legendarily capable, skilled, dedicated and hard working. She also has her magic making her more than a little dangerous. More than all that she is that rarest of things – sensible. She doesn’t make foolish decisions, she doesn’t drop out of character, she doesn’t let her emotions lead her into foolish choices or silly situations. Her realness as a character also reflects in the realness of her relationships – you can see why Adrian cares for her; not just because she is beautiful but because she is kind and caring and efficient with both and truly trying to do her best in every situation. It’s why she has such strong, loyal friends.

She’s grown so much over the passage of the books, opening her mind, discarding her prejudices and her fears – it has been a very natural, organic growth as her assumptions have been carefully demolished one by one. This continues in this book with an almost complete break from the Alchemists in her mind: she’s not on their side, she’s on her own side, doing what is right. This conflict is wonderfully displayed by it being played out through her sister Zoe and Sidney’s desperate attempt

And part of the basis of all these conflicts is her greatest flaw – she’s a control freak who fixes things. Yes, she genuinely cares – and in her caring she steps in, takes command and fixes things. It’s what she does. She sees a problem and she solves it – even if, perhaps, she could step aside (such as trying to free people from the Alchemists, or Trey and Angeline’s issues) or even if there isn’t anything she can fix.

Which in turn leads to the biggest problem she cannot fix: Adrian. We have a wonderful exploration of Adrian this book, his thought processes and what drives him. In particular we see the impact spirit has had on him – repeatedly we have been told in this book and in the Vampire Academy series that spirit causes mental instability. Adrian’s illness is presented extremely well and with great accuracy –it doesn’t require him performing over the top, stereotypically “crazy” actions to get the point across; we have a simple, stark depiction of the emotional highs and lows, the extremes of feeling that drive Adrian’s life – and work to destroy it. There’s a wonderful depiction of his conflict and fears about seeking treatment and a lot of really well presented agonising of the cost of it – and the threat that he may lose his magic to keep his sanity.

In many ways, despite the story being predominantly about the romance between Sydney and Adrian (all over events in the book are extremely secondary to that), I don’t think it is about the romance. It’s about two people who are growing. It’s about Sydney being pulled in a thousand directions – not in terms of what she must do, but feeling the duty to fix all the things and the pressure to help everyone even though she’s drowning in it and at great personal risk. It’s about Adrian trying to find himself under the weight of Spirit magic – as his mental health suffers under the barrage of spirit’s darkness we’re pushed to ask how much of Adrian – mood swinging, emotional, hard drinking, risk taking Adrian is actually the person he is and wants to be, and how much is a product of his bi-polar disorder

In a way they both face the same conundrum: how much of yourself can you give before you have to draw a line and dedicate some time and energy to self-care? Sydney risking everything for her sister, to learn magic, to help the Alchemist rebels, to help the Moroi develop their immunity to the Strigoi – how much can she do for other people and continue to take these risks?

This is about two people learning where to draw the lines in their lives and ultimately deciding that there are some things they will not compromise on, some things that they need for themselves. Neither of them are selfish – far from it, they are two extremely selfless, caring people and Sydney practically exists to serve – but there’s only so much they can give.  Ultimately I think that is the core of this book – and part of what they will not give up is each other. Sydney won’t leave the relationship out of fear of the consequences from the Alchemists. Adrian won’t let the spirit instability drive them apart.

This is the dominant theme of the books and it is an excellent one. Around that there are a number of interesting plot lines – I won’t say there was one dominant plot line simply because the whole point of that theme is that there are many people calling on Adrian and, especially, Sydney’s time and resources. We have it’s the minor romantic issues of Jill and Angeline and Eddie and Trey, or Sydney’s ongoing attempts to master magic, her work with the Alchemist rebels to make them immune to the Alchemist compulsion tattoos, Adrian’s spirit examination of those who have been cured of being Strigoi and attempts to replicate it and, of course, Zoe, Sydney’s little sister and her custody battle with her parent’s divorce. All these issues come together, none of them a sufficient storyline in themselves, but collectively adding to create the dominant theme.

Unfortunately, the erasure of the series continues. The only POC in the story come from a brief visit from Rose and her father, and it is brief. There are still not GBLT characters. With each passing book we’re seeing an ever expanding cast of main characters and still much further side characters flocking around; that cast is growing, the number of characters is growing – and the lack of diversity among them is becoming glaring.

ETA: I completely forgot a lesbian couple who share Adrian's art class. They're not part of the main group or storyline but help him make dinner to impress Sydney. It's not a major role by any stretch but it isn't erasure at least - it's a token.

In all, this is an elegantly written book with a lot of powerful scenes, strong themes and some truly excellent characterisation. It wasn’t plot heavy, yet worked despite that – a good read and a series I am, much to my own surprise, invested in