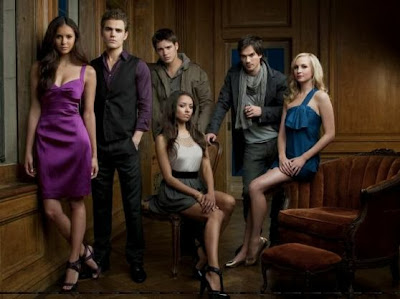 Flashback to the 1950s and the last time Damon was kidnapped by these nasty Augustine people – he was betrayed by one of his relatives, but he did stab the man in the neck before being captured so he got some kind of revenge. And in the present he’s in the cell with Wes also being controlled by vervain.

Stefan has Katherine on suicide watch after she tried to kill herself last episode and is trying to get her to write a diary to come to terms with her impending death (morbid musings should be so good for her – but a desperate shout out to the series title I guess). Katherine isn’t particularly on side with this plan. Nor am I - living Katherine, boooo! Katherine also doesn’t see how Stefan can help her with her problems when he is having panick attacks and flashbacks with his PTSD – so she’s called in help. That help is Caroline with a big big safe. Yes, it looks like they’re going to deal with his panic attacks about being locked in a safe and drowned over and over and over and over again by locking him in a safe. And not just any safe, it’s the actual safe he was locked in.

Carline needs to not take up a career as a therapist. Also Caroline has issues with Elena over Jessie’s death which she’s linking to her dating Damon in the first place for some bemusing reason – maybe a take down of Elena’s general lack of any decision making skills? Because I could totally co-sign that.

They lock a panicking Stefan in the safe while Caroline and Katherine bicker – and Katherine has an idea (this bodes no good). This idea involves locking herself in the safe as well  (this is because Caroline decided the previous idea wasn’t working having tried it… once. Seriously, these people are awful at therapy). The key to this one is if Stefan panics too badly he’ll probably kill Katherine – as Stefan tends to do in times of stress (some people have stress balls or those nifty desk ornaments, Stefan kills people). So he has to magically get over his PTSD or they’ll give him more reasons to be traumatised! And Katherine brings up Elena breaking up with him because, wait, I’m going to have to get a drink to even type this. Ok, drink in tow – Stefan dying repeatedly over and over isn’t the real problem, he’s focusing on this pain rather than the emotional heartbreak of losing Elena

That’s right, weeks of constantly drowning, of being waterboarded over and over and over again without stop is totally minor next to LOSING ELENA. The sexual tension becomes thick enough to cut with a knife and Caroline lets them out – STEFAN IS TOTALLY CURED GUYS!

Katherine and Stefan meet up in the library for sexual tension, kissing and, we assume, sex. Which Caroline gets to hear with her vampire hearing

On campus, Elena drops in on pointless character Aaron (how many more signals does he have to give that he’s not interested) and he breaks the news that Jessie “killed himself” (such is the cover story it seems) which isn’t doing Aaron much good since he’s already mega mopey after everyone around him already died (except Wes his guardian/uncle, alas). Ok she was sympathetic for 2 seconds – now she wants Aaron’s help: she wants him to help her find Wes and Damon who have gone missing.

As they wander, Elena decides to poke his pain and ask why he doesn’t find it so very strange that his two best friends both committed suicide so soon and she knows Wes forged the death certificate!  (why… why is she doing this? She knows what really killed them? Why does she want to expose the secret?).  They arrive at Whitmore house which is a problem since Elena can’t enter – until Aaron says “what are you waiting for? Come in.” Oops, Wes needs to have a talk with his ward. Oh and he can invite her in because he’s Aaron Whitmore and, technically, he owns the school and the house (well he inherited the trust).

Damon and Wes are still having nice discussions and flashbacks about the last person who tortured/experimented in Damon (a Dr. Whitmore). Wes goes to the house to meet Elena and Aaron just as Elena notices a picture of her father – he was a doctor for the Augustines, Wes explains just as he injects Elena with vervain. What’s with all these vampires and their awful reflexes?

Aaron has a minor freak out at his guardian drugging random guests and is let in on the big vampire secret and his family’s legacy of torture and killing.

In the cells Elena wakes up and Damon quickly fills her in on the sadistic vampire torturers including details of how Dr Whitemore cut bits off him for funsies (including carving bits out of his eyes, uckies) for 5 years. He endured because he had a friend and fellow tortured vampire – Enzo – who had already been there for 10 years. The topic has been about someone other than Elena for 5 minutes so Elena quickly puts in that her dad was Augustine! (because Daddy Issues > 5 years of agonising torture) and waaaaah my dad the vampire hunter totally wouldn’t torture vampires because… AAANGST. More flashbacks with conversation with Enzo giving Damon a reason to hold onto his humanity in the face of the torture and they both talk about their lost loves (Enzo’s lost love was Maggie who left the place when she realised torture was going on – which is kind of a half-assed moral stance if you ask me). Enzo even goes so far as to sacrifice himself for Damon.

In the present Elena is sure that Stefan will save them; Damon doesn’t buy that since Stefan didn’t rescue him the first time and he never told Stefan about being kidnapped lest Stefan have an angst fit over it. He escaped last time because Dr. Whitmore just had to show off his weak, half-starved, vervain-poisoned vampires at a cocktail party every New Year. Enzo’s plan was that one of them go without blood and give the other 2 rations of blood a day, not just one – ensuring by New Year’s Eve he would be strong enough to fight; they decide between them with rock, paper scissors and Damon wins (personally I would have checked who is the oldest, therefore most powerful, and gone with them).

In Whitmore house, Wes keeps up the revelations including the fact that vampires killed Aaron’s parents (yeah, well they kinda had it coming). Aaron responds by punching Wes (who has a total glass jaw and goes down groaning and moaning – suck it up man) and steals his gun (well, since it all technically belongs to Aaron I suppose it’s not stealing) and his granddaddies watch.

Down in the cells, Damon is reluctant to tell Elena how he escaped because it was bad – she assure shim she loves him and won’t judge him. C’mon, Damon, since when has Elena ever held a hot guy responsible for his crimes. He tells her – next party he ripped his hand out of his shackles, the fingers healing almost instantly then rips out Dr. Whitmore’s eyes and drinks his blood (I approve). The guests panic and run, one of them knocking over a candelabra and setting the place on fire as Damon runs among them feasting and killing. Damon runs to release Enzo from the cage – but it’s vervain treated, he can’t touch it. Unable to save Enzo – Damon ran and left him there, turning off his emotions so he could do it while Enzo begged him to be saved.

I saw at least 2 tableclothes and a rug and the clothes of all the dead guests you could have wrapped around your hands to touch the cage. I’m just saying.

Aaron joins them in the cells and he decides that maybe Elena killed Megan and her parents – that’s why she’s so nosy! Damon steps in – excuse you Aaron, he’s the one who killed your parents, not Elena. Flashback – his imaginative revenge was to kill all the Whitmore family – except one. Let them grow up and have a family and then kill them all… except one. So on and so forth. And he’s still doing it – why he killed on this year – Aaron’s aunt Sarah.

Aaron shoots him in the head. Elena is horrified (really Elena? You know that won’t kill Damon).

She wakes up tied to a gurney in an odd looking, cobbled together, clinic next to a guy in a similar situation – Enzo

What you didn’t REALLY think he was dead, right?

Do I even have to touch Caroline and Katherine’s “therapy” of PTSD Stefan… because… no. Really, no. The very idea that “it’s not working”, no matter how good the method when you give it a few hours is ridiculous in and of itself and that’s aside from the truly awful “treatment.” The idea that you can just get over mental illness – in a few hours – is a toxic one. That you just haven’t tried the new miracle cure or goji juice or whatever new oil they’re peddling – that you’re just NOT TRYING HARD ENOUGH is a pernicious millstone around the necks of many people living with mental illness (and disabled people in general). It’s a toxic message – quite aside from the idea that the way to heal someone with devastating triggers is to inflict those triggers on them over and over again.

Let alone the idea that he has developed PTSD symptoms from the safe because it is EASIER to focus on weeks of torture that caused a full blown trauma mental illness than not being with the precious Elena.

Am I the only one who felt juxtaposing Stefan’s weeks of drowning next to Damon’s years of torture was kind of a “suck it up Stefan, Damon’s been through far worse!” message?

Are we judging Damon for killing the Whitmores? I can judge him for the foolishness of it – kill them all and wipe out the family business! It’s evident from the trust, Augustine society and recruiting Dr. Wes that the Whitmore family have been keeping up the family business of vampire torture and hunting. Wes admitted as much upstairs. Of all the things Damon has done – this is barely a blip on the radar and probably the most excusable of the big pile o’ bodies he’s left behind. Frankly, given the givens, I’d help him compile a family tree.

I will praise some excellent acting and awesome scenes there though