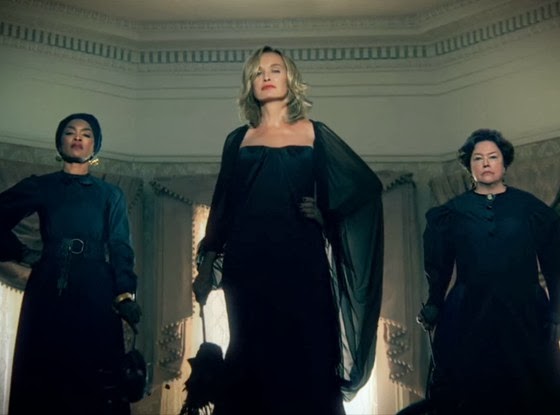 American Horror Story has gone all silent movie on us – explaining the test of the Seven Wonders that the Supreme has to pass (at last, it’s been so vaguely defined!) The tests are: Telekinesis, Concilium (mind control), Transmutation (teleportation), Divination, Vitalum Vitalis (sharing/exchanging life force), Descensum (entering the afterlife) and Pyrokinesis
Since all of these are going to be used heavily, I’m going to make ‘em all red
I can shenanigans – where has Fiona’s Divination been?
Fiona adds that the Seven Wonders are dangerous – while Queenie cynically (and accurately) believes that Fiona only wants the Seven Wonders to happen so she can kill the next Supreme. She also wants to know where Marie has disappeared to – and takes issue with Fiona’s highly disrespectful description of Papa Legba; in turn Fiona lashes out at her for not bowing and scraping to Fiona’s racially charged contemptuous commentary.
Upstairs, the newly blinded Cordelia is trying to get her visions back – trying to touch Madison to find out what happened to Misty (after Madison killed her) and Madison Transmutes away; Cordelia is quick to tell her that doesn’t make her Supreme (witches powers peak when they’re under crisis). When Cordelia insists on touching her, Madison makes a homophobic joke, but Cordelia won’t be distracted. When she touches Madison though she has no vision. Her sight hasn’t returned.
Queenie continues to look for Leveau and casts a spell to take her too him – and ends up back in the fried chicken shop where she used to work (her own personal hell – when people treated her like crap, she got no respect and saw no future ahead of her). She talks to Legba who tells her that Marie isn’t there. And yes, this means Queenie just pulled off Descensum. Queenie returns from Hell, proving her power – and finds Legba waiting for her. She wants answers
We see Leveau being tortured by Madame LaLaurie – being chopped up and scattered around the city, and Queenie asks how she kills Lalaurie; apparently impossible while Leveau herself is still alive which Legba cannot change because he and Leveau have a deal. Queenie pokes out a dubious loophole – with Leveau chopped up she cannot perform an annual service for Legba so, in theory, she is in breech (a little dubious – you can call it a breach on the argument that Leveau’s breach is inevitable but the counter argument she will be in breach NEXT YEAR and “inevitable” is questionable).
Cut to Lalaurie who has apparently taken over tours of her house and is now doing her best to cover up her actions and pretend she was never a serial killer. Queenie tracks her down (not hard) and is not impressed, and tells LaLaurie to let the old (and now injured) tour guide go. Or she will offer LaLaurie a second chance (NOOOOOOOOOOOOOOOOOOO! The last thing LALAURIE deserves is another chance!) She gives Lalaurie a chance to try and do something to try and redress what she’s done. Lalaurie laughs at the very idea – repentance, redemption? She has seen what that means in the modern world – it means going on television and saying sorry, shedding a few tears, saying some empty words and not meaning a word of it (with a montage to Anthony Weiner and Paula Dean).
My gods, who would have thought that I’d actually agree with something Lalaurie said on this show?
Of course she follows that up by telling Queenie that, no, Queenie wasn’t getting to her, she was crying and sad because the modern world was “lying” about “equality”.