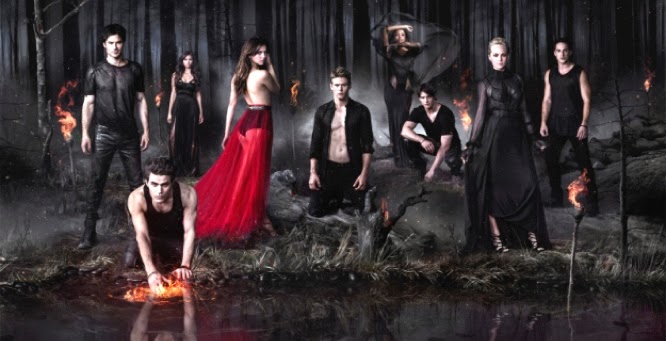 It seems to be the in thing now to start episodes with a flashback – alas going this far back means more of Katherine’s story which means, alas, she probably isn’t dead.

Katherine gives birth to her baby daughter – which is then taken away by her father before she even gets to hold her, while she begs to be able to hold the baby at least once.

This is cut in the present by Katherine in the hospital, flatlining and being treated by doctors while Stefan and Nadia wait outside. Even if she pulls through (and her heart starts again), Stefan warns Nadia that Katherine is definitely dying and all they can do is take her home and make her comfortable.

Meanwhile, everyone else is dealing with Damon and Elena breaking up (which happened because of reasons that are so stupid my head actually hurts if I try to contemplate them). Bonnie and Caroline drop in to comfort Elena (well, Caroline is celebrating because she hates Damon and understandably so) while Matt and Jeremy watch Damon drink.

Stefan calls with the news of Katherine’s impending death

To which Damon, Matt and Jeremy play an awesome drinking game of listing the worst things Katherine has ever done to them (I think Jeremy wins with the “she fed me to Silas and I died”). Elena, Bonnie and Caroline arrive with apparent outrage – because Elena totally gets to play this game as well (and she, rather laughably, is cutting Jeremy off, ignoring 5 seasons of hard drinking). Bonnie and Caroline add their own lists. They need more booze - just the number of people round the table who have been killed by Katherine or she has tried to kill needs a full bottle.

Of course Stefan is by Katherine’s side reassuring her - and her vanity. Stefan comes down to try and make them move it on but even he takes a drink and remembers some more of the evil she’s done – but then throws in Katherine’s 500 years on the run to point out her motives. Of course it’s also revealed that Stefan has slept with Katherine again for lots of extra questioning of his sudden softening towards her.

And Nadia shows up – telling the whole group she has buried Matt inside the safe and if they want him to live they have to help her save Katherine. She wants them to find a Traveller to teach Katherine how to live in someone else’s body – in Nadia’s body to be exact.

Caroline, meanwhile, is more concerned about all the sex people are having. Because… Caroline. And she runs into Klaus… shouldn’t he be in New Orleans? He whooshes after Caroline who continues to try and whoosh away. He’s arranged for Mat to be rescued by Rebekah so he can flirt with Caroline.

Katherine is having Damon-narrated dreams of Klaus killing her family while the real Damon is stopped from smothering her with a pillow by Liz – completely ruining his fun. Damon reveals the bad thing he didn’t drink to – Katherine taught him how to kill and how to enjoy it, she “ruined him.” Liz is more ok with Damon drugging Katherine when she gets snarky (I kind of love how Sheriff Liz went from “EVIL VAMPIRES AARGH!” in season 1 to giving Damon an “oh you!” look when he tries to kill people).

We get more flashbacks of Katherine’s past she shares with Damon (apparently mentally) and her insta-doppleganger-attraction to Stefan. Because we need more Damon angst. She has more horrible visions of the people she killed which may possibly be caused by Damon before Nadia arrives and breaks Damon’s neck.

Stefan and Elena arrive at the Traveller location and they talk about price – surprise! The Travellers want Dopplegangers, Elena and Stefan and now have them trapped in a rackety shack with their daylight rings turned off. Is anyone shocked?  The shack then begins falling apart and the Travellers advance (some of them in completely shaded areas, you could totally neck snap them). Stefan and Elena seem more awkwardly irritated by this than worried (and they literally let this guy take their arms and cut them rather than grabbing him, breaking his neck then throwing his knife at the others).

It turns out all they needed was a bucket of blood and then they stop chanting and let Stefan and Elena leave... uh-huh, I’d make with the neck snapping. We’ve seen Damon against them before you could slaughter them; it’s not like them having a bucket of doppleganger blood isn’t going to be used for nefarious purposes.

Nadia tries to get Katherine to body hop but, of course, Katheine isn’t going to possess her daughter now she’s feeling all guilty and angsty.

Klaus came back for Caroline to tell him how much she loves him and then he’ll leave after much drama she kisses him finally admitting what has been abundantly plain for a very long time and all of it completely irrelevant unless Caroline is going to jump ship to the Originals which isn’t going to happen because her character will be an even more poor fit on that show than Tyler was.

Stefan replaces Damon by Katherine’s death bed and comforts her eternal angst. She lapses into unconsciousness. Then Damon and Stefan drink and Damon angsts about leaving Elena (though Stefan still doubts it and Damon has an awesomely glorious snark about winning her back and destroying the fated love of the dopplegangers and ruining the universe all because Stefan convinced him not to be selfless).

In the house, Bonnie talks to Matt, Caroline and Jeremy about all the dead people she sees. And then Tyler returns – apparently he’s Rebekah’s parting gift. At which point everyone who ever died ever in the Vampire Diaries all shows up to be seen by Bonnie and Jeremy… I don’t know I guess they had a cast reunion party and decided they might as well make a show out of it. I didn’t even remember Vicki.

Katherine briefly dies then wills herself to live again. Seriously? DIE ALREADY! Still being alive, Elena forgives Katherine for all the evil she did because she understands what she went through that made Katherine into what she was. Elena gives Katherine her syringe of pain killer – and Katherine grabs her and casts the body possessing spell.

Yes, Katherine is now in Elena’s body. Nadia then calls Elena and says the word to call her forth. Alas, guess we have to stake Elena now.

The gang gathering to drink to Katherine’s demise was awesome. Absolutely, without a doubt, awesome. No fake tears or grief, no deciding she’s one of them – but acknowledging the immense out of pain and awfulness she has caused, tying on your dancing shoes and getting ready to dance  on that grave! And, yes, Stefan pointing out the reason for all that was fair. I guess *grump*

Am I going to have to hash my own squee? I suppose, because sensibly while Katherine is the source of all evil, Damon, sat right there among them isn’t even close to being clean and has been thoroughly redeemed into the gang (one laughable moment is when Mat twists Vicky’s death to be Katherine’s fault because Katherine brought Damon to town). Katherine’s scene is awesome, refusing to wash over all the evil she’s done is awesome, however completely brushing over Damon’s evil is rank hypocrisy.

Also, are you telling me that Klaus and Rebekah, after all the epic, monumental shit that is going on in New Orleans on the Originals, decided to drop in on this gang of people they don’t even like very much for… funsies? After all this time battling desperately in New Orleans, did they really just decide “screw it, they can all fend for themselves for a weekend!”

I did spend the better part of the episode waiting for Katherine to die so a last minute reprieve wouldn’t drag her back from the brink. AND IT DID! DAMN IT!

See, I think Katherine has been an excess character for far too damn long on this show. So seeing her die kind of fell flat on me, she has been unnecessary for the last season or more and needed to be put on the bus to somewhere not here forever. But, while a big send off for Katherine didn’t work for me, I could understand it because she has been a fixture of the show since episode 6 of season 1. Fine, this needs marking. Have the death watch, call in every actor who has ever been on the show as randomly pointless ghosts or hallucinations, let’s bring in the Originals from New Orleans just because – let’s run with this, a major character is dying that deserves to be marked.

And then she didn’t die? Gah! Totally wrong to tease me like this