Blood Lines (World of the Lupi #3) by Eileen Wilks 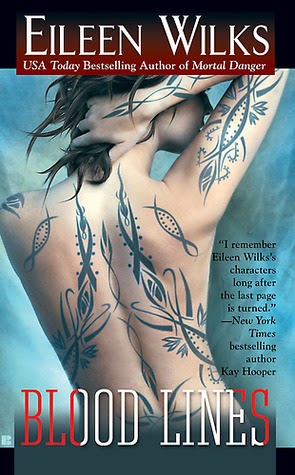 That includes demonic attacks aimed at the heirs to many werewolf clans. The attack leaves Rule injured and committed in the complex net of Lupi politics, laws and traditions at just a point when he and Lily are most needed as the magical threat grows. Even worse, the Nokolai’s sworn enemies, the Leidolf clan are taking advantage of the chaos to ensnare Rule.

This world keeps going in depth and complexity – and all of that is relevant to the story. All the vast info building of Hell last book is relevant today along with a whole lot of the theories and histories that have been expanded since the whole world exploded this book. The conflict with the different werewolf clans and their shenanigans with the heir mantle, demons wielding poison and, above all, the sudden flood of magic into the world threatening to bring about a kind of apocalypse or at least severe damage to society all combines to create something epic – a story where we really feel like the fate of the world is in balance – not the Lupi, not Lily and Rule, but the entire world. The story and the world building both leap forward in this book but they’re also excellent integrated into a whole where everything is relevant, everything is important and everything is either exciting or interesting or both.

If I have a problem it’s that there’s just too much world building. Not that it’s exposition heavy, but that there is so much going on with demons and gods and dragons and magic nodes and sorcery and different kinds of magic and the lupi and the heir mantles and demon poison and sensitives and… sometimes I feel like I need to be taking notes or be given a text book. I can follow it, but I feel you have to work to remember everything because most of it is relevant and needs to be remembered.

I like the characters in this series – Rule and Lily both circle a few tropes but manage to avoid them. They have a bond that forced a relationship, but they are adamant that their love was not forced by it or is dependent on it. Rule plays the silly protector role while Lily continually proves herself quite capable and continually proves Rule wrong in his need to shield her without being super-woman. She has some excellent conflicts between her adherence to the law and her need to keep her people safe and help her people which may not involve going through all the proper channels. She has some wonderful family connections that are fraught on some levels but deep and abiding on others and, in all, I just wish there were more of her.  Rule I’m less enamoured with – he’s not a complex character, but then I think that’s less a lack of character development and more the fact he’s not a complex person. He’s loyal to his people, his clan, his loved ones and his people’s laws, there’s no real conflict there, none of these ideals really battle each other and he knows what he has to do – it’s hard sometimes, but there’s never a battle on whether to do a thing.

I am less sold on Cullen and Cynna. Theirs is a relationship based on huge amounts of lust which, to be fair, they never characterise as more than that. They’re not bad characters by any stretch – Cynna is a tough but insecure woman with a complex and difficult past is very much informed by her background and her experiences – they’ve strengthened her and left her vulnerable in other places and she’s quite a full, rounded character because of it. She’s informed by her upbringing in poverty, her hard childhood and her tough experiences with the gangs which gives her both strength and insecurity. So there is depth to her – but for the most part she’s a strong fighter with lots of bluster over lots of insecurity which is… hardly unknown in Urban Fantasy. I like her, but I don’t think she’s super special until we see more of that depth

There’s some good class messages with Cynna’s story – but I do wish that Urban Fantasy could present a poverty that happened because people are poor – not because they have evil parents or failed parents or alcoholic or drug using parents. It is actually possible – very possible – to be poor without a dependency or criminality dragging you there.

Madame Yu is awesome in so many ways. It’s hard to pull off a character who is diamond hard, relentless, awe inspiring and overwhelming in their pride and strength and not make them an arsehole. A character who refuses to argue and discuss, a character who demands everything goes her way, a character who WILL have everything fit in how she deems fit – well, it’s a fine trick to make such a character toweringly awesome and not a petulant bully.

My main problem with Bloodlines and, to a degree for the whole series, is that it does feel a little slow. The writing isn’t the worst by any stretch but it does suffer from bloat, a little from over-descriptiveness and a little from excessive recap and unnecessary internal monologues. It’s not terrible with it, not by any stretch, but it’s just a little bit too much and when the story is supposed to eb as tense and action packed as this one, it does drag things out just a little.

We have a large number POC – Lily, Madame Yu and Li Qin are Chinese and if Madame Yu embodies a fair number of stereotypes, Lily subverts them. Benedict is Native American with depths which are, unfortunately, largely hidden. We have a large number of minor POC who are working for the FBI unit, or the magical experts who were called in to examine the crisis. If there’s a group of people involved in something they will often be racially diverse.

Both the bad guys are POC though (though they are hardly the only blatantly vile people in the book – Leidoff clan does a good job as well) and their evil is at least partly connected to the traditional African magic they practice (redeemed in Cynna’s lily-white hands). On the plus side, Jiri is, at least, more complicated and involved than a simple villain and has a powerful motherhood motivation.

There is a suggestion of Madame Yu and Li Qin being lovers but it is only a suggestion – they love each other but it could be platonic or romantic. It’s the closes thing this series has to a GBLT character – and the series has a lot of werewolves “coming out.”

I like these characters, I like the world and this story was exciting, fascinating and revealing more and more depth that is only going to make it even more worth reading and following in the future. The only flaw that prevents this from being an excellent book rather than a merely good book is the slowness – and that focus on being interesting AND exciting. During the interesting exposition scenes – which are fascinating – the tense pacing screeches to a grinding halt. During the fast, buzzing exciting scenes, all the information becomes hard to follow. I think also including both the nodes going haywire storyline and the Leidolf clan’s machinations was a mistake. Both are meaty enough to be books in their own right.