Mistworld (Twilight of the Empire #1) by Simon R Green 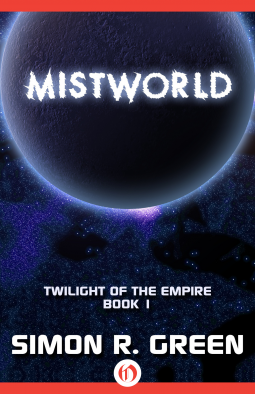 Mistworld is a planet under siege. The only thing preventing them falling to utter destruction at the hands of the empire is a psychic shield and some rusting, cobbled together technology. But the empire is patient and resourceful and is constantly looking at ways round Mistworld’s defences – and sometimes, one of their weapons gets through.

The inhabitants of Mistworld already have a hard time surviving on the chaotic world, with little law, few resources, bleak conditions and technology that dwindles with every harsh year, life is already a struggle. The empire’s machinations could drive them over the edge.

My first note has to be on the genre of this book. When I was emailed and asked to review this it was heavily implied that the book was dark fantasy… I had my doubts but I’ve read and liked the author before so didn’t need much convincing. It’s not an accurate genre description – this leans more sci-fi than anything else: with strong dystopian elements and a dash of the mystical in the form of psychics (or espers).

I think this book is a perfect example of “gritty”. Actual gritty – not Grimdark. So this means that we have some very real characters, they’re not perfect or shiny or super special, but they’re very human. And they’ve been put in a very hard situation, it’s not a fluffy story, it’s not a friendly world setting, life is hard and they know it and act accordingly. But it doesn’t cross the line to throwing in endless gore and rape and random horrors just to convince us how DARK AND HORRIBLE it all is.

So we have Mistworld. A world that is independent from the huge and dictatorial empire, though the empire is not very happy about the fact and does have a pretty extreme response to anyone who makes them unhappy. Mistworld maintains its independence in part by having a large number espers – people with special powers – who have flocked to Mistworld because the empire isn’t very accepting of them.

Of course, they’re under permanent blockade and Mistworld itself isn’t exactly hospital or brimming with resources and what little they have requires smugglers to bring it in; their technology is obsolete and held together with duct tape and chewing gum. This is all shown very well – there’s some telling, but it’s more their daily experiences and views, like being unable to afford to pave roads any more, to plastic being seen as an incredible luxury, to characters being unused to the glare of electric lights

This alone would create a fascinating setting, but on top of that we have a large cast of characters that are very real and very realised – all of these characters bringing extremely different viewpoint from the different structures of the society. We have the aging hero who helped build the society from its independence, we have the corrupt – but not TOO corrupt – councillor working hard to do his best (though a little lining his pocket). The on-the-edge fence who just wants to get by and all these life-or-death-the-planet-is-at-risk are a little beyond her. Or there’s the dedicated and lethal Inquisitor suffering a major identity crisis and beset with pressures of the past while still trying to do her very best in the present.

This all comes together in amazing complexity – we have some excellent class analysis that permeates the story. Those at the top of the ladder are battling over things like whether to rely on the degrading technology or more on the espers (and their own factions growing in influence consequently) and just how to marshal their resources to face the ongoing threats from the Empire. Meanwhile we have a number of other characters at the bottom rung of society who just want to survive. Sure the fate of the planet is important and all – but if they don’t have money to eat tomorrow, or they’re hunted down by their loan sharks then it doesn’t mean all that much to them in the long run. They don’t have the luxury of bigger-picture stories or the ability to be involved in them because their own straits are so pushed to the edge. At the same time, their stories are given a place and a prominence because they are personally important. With inhabitants of the city dying in droves it should seem petty to be focusing on Cyder’s ruined pub – but her life is every bit as destroy and under threat: it is vitally important to her.

That’s the gem of this book, even when covering epic battles for the whole planet, the stories are personal. We’re not just seeing the city rallying its dwindling resources against attack, we’re seeing councillor Steel do his best to try and hold things together in face of desperate odds and endless fatigue. We’re not just seeing the hunt for a dangerous person stalking the streets, we’re seeing Investigator Topaz, newly bereaved and highly conflicted inquisitor, torn between her past and so many goals –  does she support the planet or pursue personal revenge, does she follow the rules or go off the rails, does she revert to the person she was, or maintain who she wants to be – and to have all those conflicts linked wonderfully.

Because all of these characters are very real – even the most vile of villains, resorting to any crime if it will maintain his own level of comfort on a world where there’s little comfort to be had. In fact, his criminally achieved level of comfort may be something we’d take for granted. And while we judge him for that, we also see this is a world where the poor starve and freezes in the streets and other characters make deeply immoral – even evil – decisions albeit for far loftier motives than maintaining their own comfort.

This all comes together to be a truly excellent way to tell a story – but, yes, that many characters, that many fleshed out stories, that many different, if related, storylines does lead to a level of bloat. But it’s well handled bloat – because it’s interesting bloat, because the characters are meaningful and fascinating and real so their presence – even if unnecessary – isn’t resented. But, yes, it’s still bloat.

Another glaring issue with this vast cast of characters is the paucity of POC (despite vivid descriptions of many characters, I cannot remember identified as a POC) and the complete absence of any GBLT people. This kind of erasure is really exacerbated by huge casts of characters.

We do have a disabled character – Cat, a burglar, is death and his disability is instrumental in saving himself and the planet while, at the same time, not detracting from him as a character. We also have a large number of female characters who are both diverse and capable, from Darkstrom, blacksmith and Councillor, to Topaz the lethal investigator to Madelline, shrewd and streetwise and an excellent partner to the noble and heroic Royal and through to Cyder cynical fence and bartender. There are more but these are the ones who stood out – all capable, all competent, all with their own lives and agendas. A lot of them do have love interests that do intrude on their stories – but not in conventional means. Topaz and Madelline are fighting to avenge their lost loves – a role that we see over and over from men but rarely women, Cyder is a partner – a dominant partner – to her lover Cat. Darkstrom is definitely a peer to her partner. Their love interests are present but in ways that are different from the usual fodder we see.

This isn’t my usual genre and part of me wants to be a little annoyed at the whole “dark fantasy” thing. But I liked the book, I liked it a whole lot and, yeah, I’ll probably read the sequel. Can I still be annoyed in those circumstances? Probably not. Bah, I have to sacrifice my annoyedness for a little good-book-happy dance. It has issues – certainly with inclusion, but so long as the bloat remains good-bloat then I am following this series and seeing what’s next for the people of Mistworld.