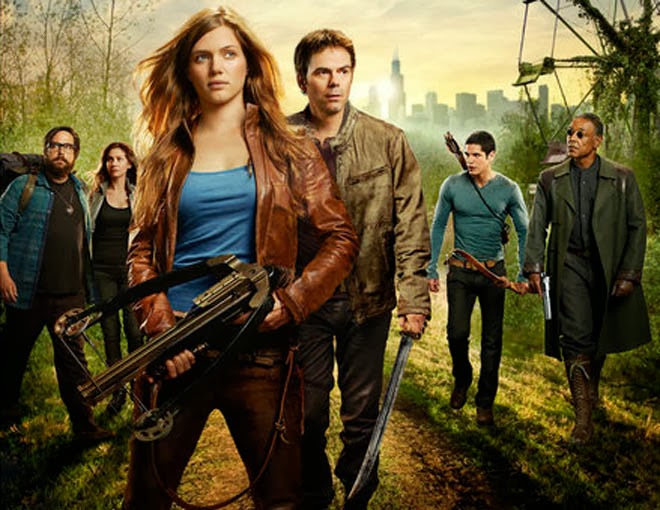 Some rather worried Patriot people look at the aftermath of what happens when Aaron gets really really angry and the nanites listen to him. It’s messy and probably smells really bad.

Monroe and Charlie save Gene – no I don’t know either, it makes about as much sense as Charlie being pally with her brother’s killer, just run with it. They take him back to the precious Rachel so we can have apologies and hugs (“sorry I aided and abetted murderers and torturers honey!” “oh it’s ok, we’re with Monroe, we’re totally fine with murdering and torture these days!” “yay! TORTURE HUG!”)

Aaron has no interest in torture-hugs. He is now working on his new super power: killing people with his glare. On a more practical standpoint, they want Gene to treat the infected Miles before he dies horribly. Gross but effective primitive doctoring follows.

Aaron continues riding the angst train and we have a flashback reminder of some place in Oklahoma the Nanitechild mentioned in case you forgot (I did). No-one’s heard it but Rachel is very kind and careful about the hallucinations-experienced-by-the-man-who-can-burn-things-with-his-mind. Gene arrives with one of his magic apologies but given Gene turning Aaron and Cynthia in led to Cynthia getting killed, Aaron isn’t feeling the love.

Miles wakes up demanding whiskey (not a bad idea, many past societies used weak booze as the staple drink since the water was often full of gribbly diseases. And life as a medieval peasant is probably more pleasant if you’re slightly buzzed) and Monroe wants to know where his hidden son since he’s filled in his side of the bargain – Miles agrees to show him

Who bets that his son, Connor, is in Oklahoma?

Rachel tries to talk Miles out of it – but if Miles shows him he hopes he can keep Monroe around because a murdering torturer (who can fight) can be a nifty tool. He always wants Rachel around to stop them doing anything stupid. HA! Oh that’s a classic! I never knew this was a com- oh my gods he’s actually serious. Rachel as the voice of reason…

On the road Miles keeps distance between himself and Monroe and wants to know exactly what Monroe hopes to achieve meeting the 25 year old son he’s never seen before. Monroe just wants to see his son because it’s special and important and Rachel gives him dagger eyes – hearing the man who killed her son wax on about how special it will be to see his son does not make her happy.

While they’re gone Aaron also leaves on his own with the electricity pendant, presumably heading to Oklahoma. Naturally, Gene and Charlie decide to chase him (though apparently he hasn’t told them where he’s going and they don’t track him so how they hope to follow him I do not know – pick a direction at random?) On the way, Gene decides to follow and watch a patriot supply train head into Willoughby because… because… I dunno, low attention span?

Charlie apparently did try to track him following Aaron’s trail but Aaron cleverly covered his tracks. Charlie hasn’t yelled at her grandfather for being a colossal screw up and traitor because yelling at old people is ineffective (cross reference: Rachel) and Gene wants them to sleuth out the wagons in Willoughby because they haven’t put themselves in enough danger yet.

Charlie agrees to help check out the next wagon – and kills the guards on it, much to poor Gene’s shock because zomg his little granddaughter kills people! I’m with Charlie when I question what he actually expected Charlie to do? Also the traitor who aided torture doesn’t get to be morally appalled, new rule. Anyway, the cart is full of oranges.

In town, these oranges are used for propaganda – look how amazing living under the patriots is, you get citrus! And someone in the back room injecting them full of something – I rather doubt it’s vitamins given the mask he’s wearing.

Back to Miles & co – Miles has stashed Monroe’s son in Mexico! Apparently Mexico is richer than most of the post-US countries that have sprung up and has now big a great big wall at the border to keep out pesky American immigrants (the writers then looked at the script and wondered if their irony was subtle enough). People flock to the borders in the hope of getting day work – and Rachel catches one of the guard’s eyes when she offer’s to do anything to get over the border which gets them across the wall.

Once there, an impatient Monroe steals the wagon and they ride to the town where Miles left Connor. Monroe generally starts fretting because the town doesn’t reach his exacting standards – and freaks far more when he learns that Connor’s aunt and uncle, the people Miles left him with died 8 years ago – oh and Miles hasn’t heard from Connor in “A while”.

Asking around for Connor finds nothing, with a strong edge of absolutely no-one wanting to talk about him, more than people not knowing anything. There’s also a whole load of men with guns around. Until they’re approached by a man who wants to know why they’re in town – to which Monroe, a little worse for the drink, mouths off – also throwing in that the man is the “whitest Mexican in Mexico” (which is kind of bizarre on more than a few levels – Mexicans are not universally dark and the guy is hardly super-duper pale).

Of course the man is Connor. Of course he is. Did anyone not guess?

Clear out the audience, it’s time to get emotional. After catching up, Connor tries to menace his dad with his massive success – he controls a gang of 30 men! Sebastian Monroe, dictator of the Monroe republic who has commanded armies is So Very Impressed. Connor laughs at the obvious lie. Miles doesn’t laugh. Connor stops laughing… Connor leaves when one of his men come for him

Cut to the night, them outside the town and Miles trying to get Monroe to come back with them to Texas for… I have no idea actually. Reasons, he will be useful in achieving their nebulous goal of something. Monroe is outraged at the man Connor turned into without his careful guidance (because Monroe would have been such an awesome influence on the kid – and yes, Rachel is quick to snark that).

When the others are asleep, Monroe sneaks back into town to talk to Connor who is sat aside moping over a picture of his mother. They talk, well argue, and Monroe thinks Connor doesn’t have enough ambition! He should be aiming to be a dictator as well! He wants to carve his republic out again with Connor’s help. Yeah that’s not happening – but a Mr. Nunez wants to talk to Monroe.


Meanwhile, the interesting characters, Jason, Neville, Julia and Julia’s new husband Victor who has no idea how screwed he is head to the White House. There there’s a swanky party introducing Bill, the chief of staff and Neville fuming away planning everyone’s horrible demise – or Bill’s anyway, with an undetectable poison. Except he’s realised that Victor will get Bill’s job should Bill shuffle off the mortal coil and suspects that Julia may be playing her own game; Julia is not impressed by his doubts – kill Bill, get Victor promoted, she manipulates Victor to increase Neville’s position and their position gets stronger. C’mon Neville, get with the program.

Their first assassination attempt doesn’t quite go to plan when Bill and his targets are all called away to meet the President. Julia is hellaciously pissed and drags Neville over the coals for failing; that he promised her a better life. He grabs her viciously (which she seems to find both scary and fun) and tells her that he will fulfil that promise – and that she should remember who he is, a heavy dose of threat.

Jason gets a chance to look at some top secret documents which makes him all shocked – no we don’t get to see them, of course we don’t. And Neville kills Bill by making him drink the poison (and strangling him a little, smacking him around a bit and generally leaving marks which should look just a little suspicious).

The good – err, bad news is passed on to Victor and his lovely wife Julia and Victor rushes off, Neville takes the time to promise Julia he will cut Victor once this is all over. I have no idea what Julia thinks about this.

And Adam – he finally arrives in Spring City Oklahoma and finds it deserted. He rants at the sky – and Grace appears. Remember her?

Do you know why I find Neville’s story the most compelling of them all? Beyond the general superiority of the character?

Because he has a goal. He has a mission. More than that, he has an overarching plan on how to achieve that – how to live the life he thinks he and Julia deserve; he has a plan, he is working on a plan. They are doing something.

Contrast that with Miles, Monroe and Charlie. Monroe wants to find a son he’s never seen and has no real plans beyond that. Miles wants to stop the Patriots – I guess? But he has no real idea how he wants to do that I’m not even 100% sure why it’s a priority for him beyond the fact they have wanted posters for him. Charlie wants – I have no damn clue, she’s just investigating

And Aaron has gone hiking because his hallucination said so.

There is no direction in this series or in most of the characters, they’re all kind of wallowing in the world.

And now Neville and Julia? See, I loved them. The cunning, scheming ruthlessness of the pair of them – united against the world, determined to get what they want and with the drive, will, toughness and intelligence to make it happen. They were awesome. Were. Now it looks like Julia is using Neville as a tool and throwing a whole lot of scorn and shame at him to manipulate him while he responds with barely restrained violence to intimidate her. Well that shattered that one storyline I was clinging to.