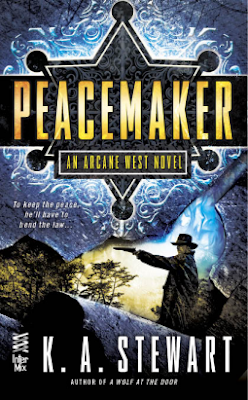 Caleb is a travelling law man, following his patrol route through towns in the west; and he’s not too happy about it. But there’s not much place for him in the east, not after the war when most of his power was burned out of him, his old skill reduced to a fraction of what he was. Now almost an embarrassment, he is shunted off to the edge of the country.

But things are not peaceful on the outskirts, tensions are rising between the Cheyenne and the local town, there’s a rash of children with strangely weakened magic, towns being destroyed an a local land owner almost ruling the town. Something is up and it’s Caleb’s job to find out what.

I’m rapidly developing a love for paranormal westerns – which is odd, because I Ioathe westerns generally – but if they keep being this good then I’m hooked.

The world building of this book is fascinating and incredibly different. This isn’t a world where some people have magic – this is a world where everyone has magic. Everyone has powers within them and those powers in turn are used near constantly to power the world around them. From the arcane mechanical horses, to electric fences to basic smithing and most certainly in war. The way the arcane ability is integrated into just about every aspect of society is fascinating and really smoothly done – creating a world that is so very like our own but with this constant thread of difference that twists everything. It’s an excellent, rich, fun world that I just desperately want to explore more. Especially since the world building was excellently written with all the information we need to be fully immersed but no long, dry explanations and lectures to tell us exactly how it works. I can see the framework of it but desperately want to know more – but it was and it’s going to be given in increments – after all, if everyone in society knows how to use magic, why would we need lectures on how to use that magic? It would be like random characters deciding to lecture us on how to read.

Also, some magic users have familiars. And Caleb has a jackalope and he’s cute and funny and I love the addition to the world, he lightens things without being ridiculous, is amusing without being slapstick and fits into the world rather than being an odd add-on

This is all really helped by a wonderful writing style. Detailed and evocative when necessary – such as Caleb’s reminiscing of the war – with some excellently written action scenes (with magic and some really novel uses of that power and integrating it with the weapons of the time) that cross the line into amazingly epic at times. The pacing is perfect, that balance between development and action, between moving the story forwards while preserving the mystery really works.

Then we have those people who have, either from birth or with an accident with their magic, been drained of their ability. They’re burned out and nulled and, in a society where everyone else does have magic, they’re considered disabled. Now, we do have a bad record in fiction of marginalised issues being appropriated poorly for fiction, but this is an excellent example of it being done. If magical ability is considered the default state of humanity, if the majority of jobs regularly use magical ability then those without magical ability are very much disabled and disenfranchised. The way they are regarded by the other characters is an extremely good representation of how the disabled are treated in general – pitied, a kind of fawning, horrified pity mixed with a cautionary tale (since it could happen to them as well), but at the same time condescended too and assumed to be lesser and weaker – there’s an inherent superiority assumed by anyone with magic over them. Caleb also talks about the lack of opportunities for them, of the magic-less being forced to become homeless beggars and everyone assumes they cannot work. The blacksmith in the town has no magic, but with simple accommodations he does apparently good work – yet people still hesitate to rely on, assuming that his in-world disability means he cannot do his job properly.

Then there’s Caleb himself, injured in the war and having his own incredible magical talent reduced to a fraction he once had. His adaptation to his reduced state, his anger, shame and almost mourning as well as the pity of others all come together in an excellent portrayal of transition and conflict.

The plot itself probably isn’t all that original – in that we have the Wild West with the insidious wealthy land owner doing insidious things to insidiously get his hands on more wealth. But the elements of the story are wonderfully blended with this excellent world which brings originality to it – it may be a similar story but the background is so original as to highlight whole new aspects and bring the whole plot a new dimension. This is coupled with some fascinating characters, especially Caleb, and the excellent writing to carry it on.

There are a number of POC in the book, including minor characters in town, but not many I would consider major main characters – but then, other than Caleb himself I don’t think this book has major main characters, albeit it has significant minor characters. One of the primary conflicts in the book is between white settlers and Native Americans – which means we have a lot of historical racism portrayed, but also Caleb and several other character’s distaste (without the rather “modernising” of the good guys to make them immune to the prejudices and attitudes of the time. They all consider the Native Americans to be mysterious and alien but are repelled by the contempt shown by others in the town).

So while in many ways it seems to follow the trope, there’s more involved to it – it more runs parallel with the trope but never meets it because of the nature of the world, the magic system and the ultimate end goal of the characters all kind of derail it. It runs at the trope then veers off at the last second. It’s also interesting how the presence of actual woo-woo makes for an adjusted world in terms of power levels and the conflict and treaties between the US government and the Native American tribes – because the Native Americans how power that is fearsome and scary, it changes the power balance somewhat; the ramifications of this special woo-woo have been built into the world.

Sadly, there were no GBLT characters. There were several women, again not in what I would consider major roles but, equally as I said above, this is a predominantly a one man book. The women we have are all determined and powerful, brave, resourceful and skilled and able which is good to see – but they’re also borderline spunky in more than few places and that determined self-sacrifice/suicidal foolishness leads to rescuing being needed. When rescued they don’t hide in a corner, but get up and fight and there’s at least one instance of Caleb being rescued by a woman himself. But there is a difference between Caleb being rescued because he was ambushed, and a woman being rescued because she decided to run off and sacrifice herself while relying on the bad guy’s good will to actually achieve anything.

In all, I loved this book – there were things that could be improved, but I have hope that they will be if the series is continued. The world is amazing, the main character is fascinating and the story runs along and drags me with it, well and truly hooked. This is one of those books that actually makes a whole genre look appealing – and one where I felt truly sad that it was over – I can’t wait for book 2.