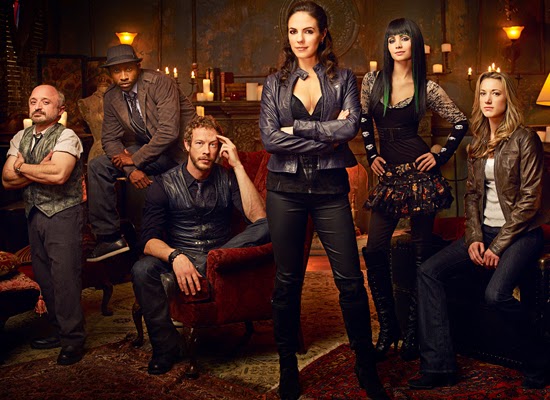 After Dyson was taken by the Una Mens last episode for the terrible crime of sleeping with Bo (therefore fraternising across Light/Dark lines), Bo and Kenzie kidnap a monk and drag him to Hale at the police station to question

Questioning is normally pretty easy for Bo, a little succubus zing and it’s all done. Except this monk is immune – he’s a eunuch. Thankfully, he also folds really easily when Hale threatens to use his siren-ness on him. There’s not going to be a trial – Dyson is going to be executed for treason since in 1899 he killed humans and fae in cold blood.

Kenzi and Bo are convinced it’s all a terrible lie and the monk commits magical suicide (what? After he’s told them everything that’s useful? Convenient little prisoner isn’t he?)

At the Una Mens, they execute the scavenger who was helping Bo find Vex, while Dyson looks on all grim. That’s just in case you forgot how scary they are. Are we reminded? Yes? Good.

Bo calls in Lauren to help and is a little surprised that Lauren agrees – though Lauren sharply points out Dyson is family and being Dark doesn’t change that, also she gets cool toys for being Dark (she doesn’t ask, or explain, she takes unlike with the Light).Anyway, Lauren’s wiring Bo up to an oracle, Cassie (Casandra the oracle? Really?) so they can look into Dyson’s memory and prove his innocence. Cassie throws in some snark about the hole in Bo’s memory and how she once thought Bo, the unaligned succubus, would save them all – apparently not. One scary red string of fate later (which is supposed to be risky) and Bo will be transported into Dyson’s mind, though characters form his past will be replaced by people Bo knows because of subconscious and so they don’t have to get a whole new cast of actors. When Cassie appears, it’s time to leave or be brain fried. Simples!

Meanwhile, Kenzi, masquerading as  someone cleaning Dyson, ties the other end of the string around his ankle, creating the connection.

Bo wakes in Dyson’s memories, in a French speaking place, naked between 2 women with an angry man banging on the door. Since she’s filling in as Dyson, she shifts to a wolf and escapes through the wall. Checking herself in the reflection in a mirror, Bo sees Dyson staring back at her – just in case the wolf shifting hadn’t made it clear she’s playing Dyson in his memories. No more time for gazing at herself as she’s chased down by the man (the father of the two women she was with) and is cornered and held at gun point before Trick (or whoever Trick is playing) saves her with a staff.

She follows him to sanctuary but is quite happy to play the rogue and has no real wish to play good and turns to leave but he brings up the Hellscore (I’ve rewound it a thousand times and I’m sure he calls them hell shoes… anyway, satanic footwear or not, it’s a special Macguffin sought by all, including the Wanderer). They can only be worn by a worthy hero (hey, maybe they are demon footwear!) and rumour has it they’ve been found and they’re going to be sold and Dyson/Bo (I’m just going to go with Bo because it’s shorter) has to get them back. Also, this person doesn’t just look like Trick but apparently is Trick. Or her subconscious is translating names as well (which means the writers didn’t bother to make up actual names which would be really sloppy).

Anyway she goes to a bar where the devil shoes are being sold and is greeted by an angel in lingerie – Kenzie (and has a weird memory glitch moment –seeing someone in modern dress before they fade out). The entertainment is Lauren (a singer called Flora) in a basque singing in French. Unfortuntely for Bo, she doesn’t get to enjoy the floorshow as her memories drag her out.

Back in the real world, Hale tries to convince the Una Mens to let Dyson go. He makes a great case but they ignore him so he rants at them. And then Kenzi’s phone goes off. Bringing a human among the Una Mens is also bad bad naughty, getting Hale locked up and Kenzi scheduled for execution as well.

Back in the memories and Bo catches up with Lauren/Flora – they kiss and then Bo/Dyson gets slapped then they kiss again. Bo tells Lauren about the demon shoes and they plan to steal them and sell them for oodles of money – letting Lauren/Flora buy her forest back (she’s a Leshii fae, a forest spirit). Plan made they have sex, and Bo looks in the mirror to see her as Dyson and after a little confusion is happy to go with it.

The Prince, the bloke with the Special Shoes, arrives to see Lauren/Flora so Bo has to hide. The prince is played by Vex putting on a truly awful Spanish accent (he’s Prince Philipe III of Castile – which we’ll just let go despite many things dubious about that). She tries to steal the really ugly devil shoes, he notices and Bo knocks him out. Lauren isn’t thrilled with this since they now have to explain concussed royalty and they have one of his men determined to see the prince banging on the door. To hide them, they put the shoes on Lauren’s feet but she declares “the hellscore are not for me” and then kicks Bo and leaves.

Putting on the devil shoes is a bad idea. This should come as a surprise to absolutely nobody. They’re almost as bad as crocs.

Meanwhile in the real world, Kenzi is imprisoned with Dyson who is, bemusingly, really impressed by her performance and wants to train her to be a shadow something-or-other (dark mysterious whispering is not helpful for hearing the pseudo-gaelic). Dyson’s also not 100% joyful about Bo digging in his memories since ancient beings do have the odd regret or two lurking around.

Back in the memory and Bo follows a trail of many many many bodies – Flora/Lauren’s trail. And Cassie arrives –it’s time for her to go if she wants to be safe. Bo, naturally, refuses and Cassie praises how brave and special and wonderful she is and how no-one has ever managed to last this long in someone else’s head before. Yes Bo the super special one, everyone keeps saying it but we rarely see it.

Cassie wakes up and leaves, cursing that the shoes will kill them all and absolutely refusing to help one second longer no matter what Lauren says – she does warn her not to cut the red string herself, though.

In the memory, Bo finds Lauren/Flora and they fight, Flora has nifty wooden wolverine-claws. Bo gets the upper hand roars, bringing Flora back to herself. Bo tries to take the shoes off but can’t, while Flora cries that she doesn’t want to hurt anyone – Bo/Dyson tells her he loves Flora but Flora denies it. She loves her forest and Dyson’s love is yet to come – and then we hear a gunshot and Flora falls, dead. Now the shoes come off

The man who shot Flora drops the gun, he’s sure that Dyson, with his reputation, is bound the blamed for all the killing. The man snarls out Dyson’s terrible reputation as a conman and philanderer, expecting Dyson to run as he always has. Dyson/Bo blames himself for Lauren’s death.

In the real world, in the cage, Dyson explains his guilt to Kenzie – he was the one who made Flora put on the devil shoes, it’s his fault.

Back to the memory and now we see Dyson playing himself – he refuses to run or let the man have the evil footwear; and Trick appears behind the man and smacks him over the head with his staff. Trick doesn’t want the Bad Boots, he wants a second for the New World. I guess he gets lonely on long voyages.

Back to reality and the Una Mens arrive – Dyson offers to give them the Sinister Shoes (yes he still has them) if they’ll release Kenzi.

In the memory, Bo/Dyson resolves to hide the shoes – and then Lauren arrives. The real Lauren, using her own red thread. She tries to talk Bo into cutting her red thread as her memories grow more and more confused. Fused memories keep showing Dyson’s champion ship belt and this brings Bo some inspiration – she cuts the string and wakes up. But Lauren is still in the dream and confused – and has left written instructions not to cut the string. Having no other idea, Bo kisses Lauren and she cuts her string and wakes up.

Bo and Lauren go to the Una Mens, with the Sinister shoe (hidden in the belt) to offer to trade for Dyson and Kenzi’s freedom. She also recognises the voice of one of the Una Mens masked guards – it’s the man who killed Flora. Bo declares that Dyson isn’t guilty of murder, the Una Mens are – and again offers the shoe.

Everyone goes to the Dal for hotdogs and bonding and Lauren looking on all mopey while Dyson and Bo bond about how intimate the whole thing was. And Dyson tells the rest of the story – of him joining Trick to found a fae colony in the new world free of conflict; with Trick identifying Dyson’s history and why he’s needed and showing Dyson that he’s the Blood King.

Kenzi remarks at how Dyson went on to save them several times but Dyson calls trick the saviour. But Bo objects, he hasn’t saved her lately and she’s tried of tip-toeing round the fact he’s her grandfather and the Blood King – so why hasn’t he helped fill in her memories. Kenzi points out Trick is scared of something – and they link it to the evil footwear and the One Who Wanders

Bo decides it’s time to find the Wanderer and to do that they will need something he wants – the second shoe. Which Dyson gave to Angel (who was played by Kenzi), bartender and shifter. And I think Bo assumes that she’s the hero destined to wear the shoes.

Ok, Wanderer bad (and 99% chance Bo’s father). Una Mens up to something and everyone’s memory is messed up. It’s episode 7, can we have a little more clarity than that? And what are these shoes – don’t just say powerful, make them more than a Macguffin, give them some meaning or I will keep mocking the Sinister Shoes, the Cursed Clogs, the Fiendish Footwear!

Also, the Una Mens want the shoes. They’ve already proved themselves able to easily be able to beat any fae by turning their powers back on them – so why accept Bo’s deal? Why not just take them? For that matter, doesn’t wanting the shoes put a whole question on the very nature of the Una Mens? If they’re emotionless enforcers of the law as they were portrayed – then bribes wouldn’t matter (nor would they be effective); proof of innocence would be sufficient, the law is satisfied (though Kenzi would still be killed and, presumably, Hale punished for letting her in). if they’re just after the shoe, why not just claim the shoe, demand the shoe from Dyson directly (by threat on those around him), why build a trumped up murder charge? Why go to such convoluted lengths?

And why do they want the shoe?

See, this is the problem with season 4 so far – every episode asks more questions and none of them have been answered, but we have been moving really slowly with lots of bemusing distractions (like Bo on the train, Bo at the farm being stalked by a ghosty fae etc) which just makes the lack of any real answers more frustrating.