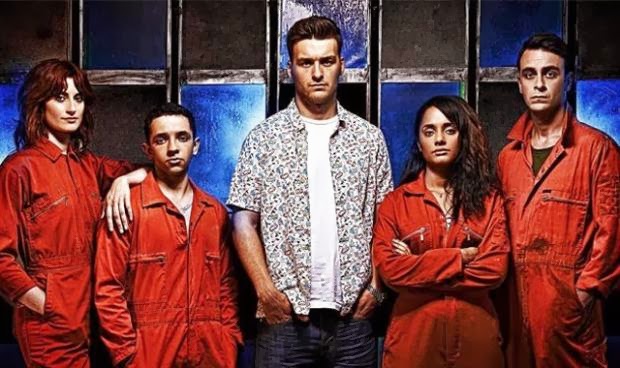 Greg, the super-creepy probation officer, is breaking into the gang’s lockers to search them – finding white powder in Abbey’s locker – he decides this explains why she isn’t around and makes some absolutely terrible noises which I think is supposed to represent a rave or possibly that a weasel has crawled up his trousers and bitten him somewhere sensitive. Finn points out it’s actually sherbet and Greg takes the weirdness to all new creepy levels that don’t even begin to make sense

Greg’s weirdness does emphasise that Abbey is missing and the gang goes searching for her – at Laura (girl who smells good) flat; where they hear screams. They burst in and charge to the source of the noise and find the two in bed together.

At the community centre Abbey describes how sleeping with guys made her feel empty but Laura completes her to which Jess announces the answer to all of Abbey’s identity problems – she’s a lesbian.

Cut to Greg, who has been creepily stalking Finn and crying over his rape, questioning Finn on whether he’s involved with Alex, generally terrifying Finn and shares half a kit-kat with him.

Meanwhile, Abbey and Laure are enjoying some sweet sensual camera work that does a really good job of hiding that they’re not actually kissing, when Laura’s ex-boyfriend shows up, only no-one told him about the ex-part. That’s ok, Abbey, who introduces herself as “Abbey the Lesbian” is happy to tell him (though Laura makes it clear she’s not a lesbian, it’s just Abbey who is special. She can’t be lesbian or bisexual, it just has to be one special woman, really?). He grabs Laura and calls her a stupid bitch – and Abbey leaps on him, drives him to the floor and beats 8 kinds of hell out of him before Laura pulls her off him.

In Laura’s flat, Abbey sees a small stuffed monkey and we see two little girls (a flashback?) in bed, with the monkey. One of them is worried about “scary” being there, under the bed. Back in the present Abbey worries what Laura thinks of her – but Laura felt safe and liked it – and they kiss (for real this time). As they start to have sex we have another flashback to the two little girls; one (Laura by the monkey) is afraid of Scary coming to get her, while the other reassures her, causing a dark shadow to retreat. Abbey delays proceedings to say that Scary is coming – and explains her memories to Laura. But Laura doesn’t understand it, only one other person knew about her childhood boogeyman – her imaginary friend, Abbey. Yes, Laura was caught out in the storm of weird powers and manifested her imaginary friend. Time to stop all sex and clutch the covers to themselves.

She explains this to the gang (who have, to be honest, seem weirder) and Rudy grabs her breast because, of course he does. He then angsts with Rudy 2 over his endlessly infuriating behaviour and the fact he likes Jess (run Jess, run!)

Oh gods, now Greg is playing the piano in his continuing stalky quest to seduce Finn, a man he has terrified repeatedly. He orders Finn to sit next to him and force him to join him in a duet. Finn leaves as soon as he possibly can.

Finn tells his worries about Greg to the group which doesn’t go well since they have little sympathy – and we see the flip side to Laura manifesting Abbey. If she creates her imaginary friend – then what about her childhood terror, Scary?

Abbey goes to see Laura but finds the ex-boyfriend is back at her flat and telling Abbey that Laura wants nothing to do with her. Abbey sneaks into the bathroom to talk to Laura, even cutting herself to show she’s real. She cries and begs the be acknowledged by the only person she has but Laura refuses her – and her boyfriend breaks in and grabs Abbey. In the struggle, Abbey cuts Laura – and Laura again tells her to leave, holding her boyfriend.

Oh gods back to the community centre and Greg and Finn. Greg has been drinking and has taken Finn off community service so he’s no longer breaking any ethics rules pursuing a relationship. Greg advances, singing, while Finn backs off, saying he’s not gay (but that he apparently “looks gay.”) Finn starts almost running to avoid the singing probation officer. Cornered, Finn reacts to Greg’s approach by pushing him back with his telekinesis, over a railing – and down several storeys. He appears to be dead

Dead probation workers they can deal with – Alex and Rudy arrive and they argue over whose fault it is (no-one is perturbed by dead probation workers any more). They take him away to bury, drop him in the hole and he gasps in pain – Rudy reacts by hitting him with a shovel. He’s not dead (not even from the shovel).

With the guys out, Jess arrives at the community centre to find that Abbey has taken an overdose. She forces Abbey to throw up the pills she took.

The guys load up Greg in his car and Rudy takes his penis out because… well, Rudy, basically. They set his car to crash hoping that Greg will wake confused and put it all down to the crash – but the car crashes into Jess’s car just as she, and a newly revived Abbey, arrive. The crash seems to work at least, Greg wakes with only confused memories of what happened.

At the support group, Sam the man who can fly, talking about his powers and how he has spent all his life scared and running and now just can run better. Rudy 2 wants to show him a different way.

Back to Laura and her boyfriend, Rob, is eaten by Scary. Bye bye POC, your days were limited.

Laura goes to see the gang and Rudy… well goes all Rudy and Jess laughs at him (much to Finn’s shock – and mine. I thought she had more sense). Abbey and Laura reconcile since they still have the weird creator connection and they go through old photos and get on quite well – before Scary shows up and grabs Abbey. She tells him to fuck off and runs to Laura…

Followed by Scary – who is actually pretty scary. They try to hide in the dark, Abbey reassuring Laura, when Scary grabs Laura and drags her across the floor by her hair. Abbey’s not having that – and stabs him with a swingball poll.

Scary’s dead, yay. Abbey and Laura review their relationship but consider it far too incestuous- but they part on good terms.

And we close with some guy trying to mug Rudy 2  - only to have Sam the flying man whisky him into the sky and save him (that’s Rudy who’s whisked – though whisking the other guy into the sky and dropping him would also have worked). Sam looks all confident now, Rudy 2 has the screaming meemies.

Abbey has complete utter amnesia. Abbey may not even be her real name. Discovering she’s a lesbian (through extremely creepy smell-stalking) does not solve the mystery. Her biography, her entire life history, cannot be summed up with the word “lesbian”.

But then, Abbey appears not even to be an actual person, but an extension of her lover. The lover who assures them she’s not a lesbian – she’s just attracted to her own mental construction  - and it ends with a suicide attempt. Wow, and here was I ready to praise a relatively decent (if flawed by creepy sniffing and Abbey repeatedly being presented as debased) depiction of GBLT characters. That was silly of me, wasn’t it?

The sad thing? The whole storyline is actually a pretty fascinating one – the idea that Abbey is actually a creation similar to the Rudies, but one who we have been seeing as a character is a wonderful one to explore – but without the “hey lesbian – HAH JUST KIDDING! Let’s dump some creepy all over that sweet loving!” Especially since the show has such an utterly appalling reputation for homophobia already

Speaking of – Greg and Finn is creepy abusive and all kinds of nasty. Greg is a predator straight from the pit of all those gay sex predator memes that just will not die! Then follow it through – the out of control gay sex predator makes his move on the poor innocent straight guy who, in panic, retaliates and kills him (even with the resurrection).

That’s text book gay panic defence. It’s argued court by straight people trying to justify beating and murdering gay people. So, no, this whole Greg storyline is not comic, any more than Alex raping Finn was.