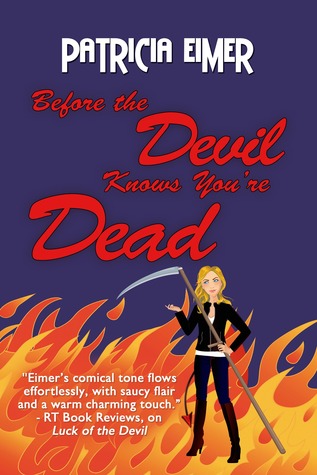 Being the devil's youngest daughter continues to be a challenge for Faith.  Her love life is a mess, having broken up with her nephlim boyfriend Matt and now that she has accidentally become the angel of death, she may never be able to touch another person again.  Faith may be a demon but as a kind hearted nurse who works in the pediatric ward, deciding who is going to live and die each day is at odds with her profession of saving lives. Not to mention, being the Angel of Death comes with a lot of paperwork. Unfortunately for Faith, this is only the beginning of her problems.  When the archangel Michael decides he wants her powers, it's up to Faith and the rest of her odd family to put a stop to the apocalypse.

Before the Devil Knows You're Dead continues in the irreverent manner of the last two books in this series. If you are a bible literalist or even highly religious, this most definitely will not be the book for you.  If however you are open to the idea of God and Satan being brothers heading up what is easily the most dysfunctional family ever, dive right in. Eimer plays with many biblical stories and adds great humor to them like an over protective dad being the reason Jesus was resurrected.  Or even things like having Jesus say, "in my name," when he is frustrated.

Faith really hasn't grown very much since the first two books.  This would be a problem if I didn't like her character so much.  She knows who she is, what she values, and is always ready to act. At times she walks the line between becoming a spunky agent, particularly when briefly stripped of her powers but she manages to keep her wits about her.  All of the surrounding female cast are strong women particularly Lisa who refuses to be treated like an invalid because she is pregnant and demanding that Faith now wallow in her misery after becoming the Angel of the death.  There is a real sense of camaraderie to the female characters. The only real problem I have in terms of gender is the vengeful Brenda, who attacked Faith sure in the belief that Faith was the reason Matt rejected her.  Brenda is the trope laden, stalking ex girlfriend.

Unfortunately, once again the gender switching, bisexual Malachi is a problem.  When he shas ex with men it's in the guise of having a dirty weekend  to create a distraction for Bassano.  When Malachi has sex with women, it's in the form of a relationship.  This is highly problematic because there is an element of deceptive gender in his interaction with Bassano because Malachi clearly identifies as male as well as positioning the sex with Bassano as dirty and wrong.  I wish that Eimer had simply included a GLBT character without the subterfuge.

Faith's family continues to be as dysfunctional as it gets and this leads to many humorous moments.  With Jesus for a first cousin, God for an Uncle, the Antichrist/ archdemon of Gluttony for a brother, the devil for a father, and Lilith as a former step mother, how could it not be.  Throughout Before the Devil Knows You're Dead, I laughed and laughed. It was things like Tolliver blaming the pending apocalypse on "right wing-militant vegans" that just had me in stitches.

I will admit that at times, the story did feel muddled, particularly closer to the end.  I found the big standoff between Faith and Michael to be particularly disappointing but because I had laughed my way through the book, the anticlimactic nature of the ending itself didn't bother me.  Call me easy but a demon hamster will win me over every time. Before the Devil Knows You're Dead, isn't epic, it doesn't come with an ass kicking protagonist but it is some really great paranormal chick lit.  If you go into it expecting to laugh and shake your head from time to time at Eimer's wonderful imagination, you won't be disappointed.