Up From the Grave (Night Huntress Series #7) by Jeaniene Frost 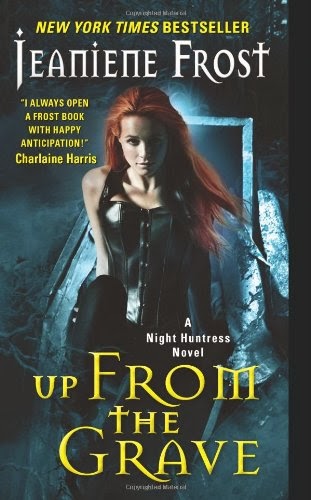 Kat and Bones have a very happy life having found a sense of normality and peace – but not so much for Tate and the other members of her team. Working under the devious new director, Madigan, they all seem to have disappeared mysteriously. Obviously Kat and Bones can’t let that slide – especially since it’s clear that Madigan is hiding something that the Vampire and Ghoul nations will need to know about

When they find the full extent of what he was doing, not only is it horrific but it has horrendous potential consequences should the results be known. And not cleaned up

But cleaning it up means the death of a child who has already suffered so much – Kat must find a way to prevent disaster striking them all, and living with the aftermath

This book has a moment of utter guilty pleasure epic for me in the middle which had good and bad points. On the good – while I like character development and nuanced plot lines, sometimes it’s fun to read about pure mayhem, well written, glorious, bloodthirsty chaos! Especially in this genre where the actual sheer destructive power of vampires is surprisingly often muted. It’s an abstract, or buried under mustiness, or fear of humans finding out or something. There’s usually an urge to keep the mayhem off screen or have it in bouts followed by lots of guilt.

This? Not so much. This was a pack of vampires against a human opponent who had effectively declared war. Destruction, mayhem and a whole lot of “you REALLY shouldn’t have done that” follow and it was epic, it was exciting, it was glorious, it was carnage and the bodies piled high and I should have been so very disapproving as the red shirts piled up in glorious bloody heaps – but I wasn’t. Because they’re vampires and someone has screwed with them and if you’re going to screw with super powerful creatures then you should expect to have your arm ripped off and you to be beaten to death with the soggy end.

It was epic and I loved it. It was a great and glorious ending

In the middle of the book.

It kind of took me a long time to get back into the story after that. I had had my grand finale. I had had Kat and Bones establishing their Happily Ever After – and it did it really well. The book opened with Kat thinking how perfect her life was, how she loved her husband, how she loved her friends and how she had, over the course of the series, completely resolved all of her self-hatred issues (which has been a fun and complex journey to follow). With the big glorious slaughter with Kat, Bones and just a few of her allies slaughtering their enemies with ease and glee, it established that Kat’s happy life was also secure because they were all far too powerful to be messed with any more. It was a great ending.

But the book kept going. Part of that is I get the sense that Kat’s HEA was somehow unsatisfactory – especially since a child was then inserted to “complete” Kat and Bones’s family and I’m not sure how happy I am with that. Kat and Bones had an epic HEA, I’m not sure why it would be broken without the addiction of a child figure to make it more real.

Not that I didn’t like the storyline of finding and protecting Katie. In fact, it was an excellent contrast to the slaughter they had just unleashed. There we got to see how ruthless, how dangerous they could be when it came down to protecting themselves against outside threats. Anyone who threatens them, anyone involved in actions against them, will be slaughtered – brutally and epically. However, the other side is not only do they spare the innocent but they’re not willing to see an innocent killed just because it would be convenient to preventing the vampire/ghoul world being shattered by tension again. They’re ruthless, but they’re just, they’re harsh, but they have limits.

And I think that contrast would have been far better served and far better done without Kat having a super special reason to care for Katie and this freaky forced relationship that I just didn’t really buy. And “didn’t really buy” unfortunately holds for a lot of the story – Bones pulls a trick we’ve seen him do before but it works because he’s decided to keep a load of his growing powers secret from Kat for… reasons. And Denise is an awful, terrible character – not because of her personality, but her power set is world breaking. She’s too powerful. She’s too useful. She just wanders in and FIXES things, she’s a friendly Deus Ex to help the author out of a tricky spot.

In terms of the female characters, we had the problem of Bones lying to Kat, again, putting her through emotional hell all on the excuse of “your reaction has to be authentic.” I’ve seen this used time and again in urban Fantasy and no matter how bad an actor the woman is, when it comes down to it, it’s an excuse to push her out of the decision making process since she doesn’t realise what the plan is. We also have Bones and Spade both being uber protective to their respective wives, pulling little strops when they think they may be taking risks.

Marie Laveau is a character that has been used a lot in fiction lately, but as far as portrayals go, this was one of the better ones. She was highly respected and titled, she was powerful but not evil and both compassionate and wise while still feared for her epic abilities. Strong without being angry and evil – it was a nice contrast. She was a decent character and a force to be reckoned with along with Mencheres, another POC who brings a lot of might and wisdom to the table. They both do have special woo-woo which is something of a trope – but then, everyone including Kat and Denise and Vlad all have special woo-woo as well. Several members of Kat’s team are also POC though they only had minor roles.

There is a moment when Kat makes a terrible comparison to slavery – the kind of appropriation we’ve seen a lot in Urban Fantasy and hate. And Marie Laveau turns round and says how very not right that is and how Kat has absolutely no right to make such a comparison. Which is excellent – a character being corrected for their actions works. But she kind of just repeats it and Marie lets it go – she backs off a little but keeps the theme going. It’s like it’s close – but misses making it work because the correction would stick or be repeated if it was a true challenge Kat respected.

We had a thankfully brief cameo appearance from her deeply stereotyped Black Gay friend who quickly left the scene, alas that concludes the GBLT inclusion.

In the end, I think the first half – taking down the human enemy so decisively was generally pretty excellent with a couple of flaws. The second half, the search for Katie, was a decent overall story in outline, but in detail was held together a little with writer chewing-gum-and-duct-tape (Deus Ex Machina). I also think Vlad was inserted just because it was the last book and he needed to be there.

This book concludes Kat and Bones’s story – though, I suspect, not the world since there have been numerous spin offs. I’m never happy when a series ends, especially a series I enjoyed. I am one of those who would love the series to keep on going and going and going forever more; but I have to praise Jeanine Frost’s decision here, it’s time. Not because the story was weak or lacking or the characters hollow, but because they have succeeded. They have created a life and a power for themselves and while the story could probably be dragged out more by pulling up more threats, it would be hard to create a new story that wasn’t convoluted, didn’t break the world or didn’t travel again over old ground. This book neatly ended the series – it was time and I give a lot of kudos to an author who can recognise that.

To be honest, while I liked this book a lot in places (big epic fight scenes of epicness) I also found a lot tiresome and not very well crafted, so my fang rating is a bit shaky. I’ve gone with 3 Fangs, but for accuracy I would have said it had moments of 4 Fangs while most of it grounded at a 2.5 Fangs or even a 2 Fangs. Moments of brilliance but a lot of holes.