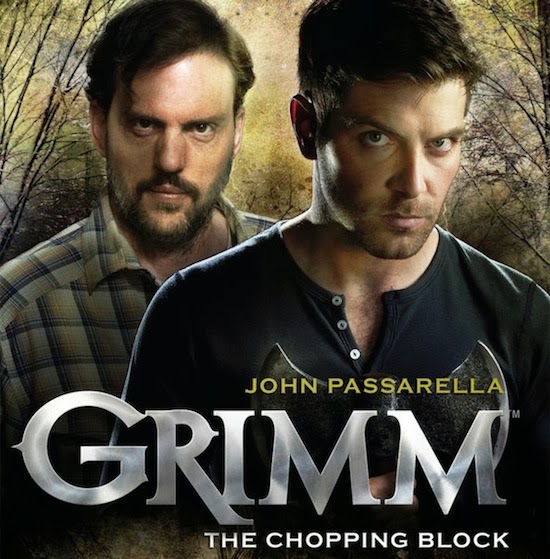 In the middle of a case of Wesen-induced zombies, Nick and Hank have another case to follow. Human bones have been found – chopped up human bones. Investigation quickly reveals more and more bodies quickly piling up and a disturbing fact…

The bones have been boiled.

Many disturbing scenarios occur to the investigators are they become more convinced that the perpetrator is a Wesen – but there are many false leads to track down and as the full horror of what is happening becomes apparent, more and more bodies pile up

When I read a book of a TV series, I’m always a little worried about how it will be written – worries that are wonderfully displayed by this book.

There is nothing wrong with how Nick is portrayed. His thought processes, his behaviour, his opinions are all perfectly consistent with how Nick could act or could think. The problem is that, after watching 3 seasons of the show, I’ve already formed my own thoughts about how Nick thinks – and they don’t mesh. Of course, this is one person’s headcannon against another’s – but there are things like Nick automatically considering Wesen when he’s confronted with a crime scene when I imagined he’d do the opposite, or when he has extremely long internal musings or monologues that has part of me yelling “nooo, Nick wouldn’t do that!” For entirely spurious reasons of course.

I explain this first to say how there was something of a disconnect between me and the characters – I also found other problems with the conversion. I think there was too much of a desperate need to shout out to the series as often as possible, referring to past episodes, referring to the Grimm episodes that were supposed to be happening at the same time as this book, name dropping as many Wesen as possible etc. There was too much homage. And too much recapping – so many details that readers who have already seen the show already know, but not nearly enough for someone brand new to the show to be able to pick it up.

Which leads me to my next problem – the research. I am impressed – I am in awe – of the sheer amount of research the author has put into this book. But it’s too much – I don’t need to know the intricacies of veterinary medicine from Juliette, I don’t need to know the kind of gun everyone uses – or the brand of taser. It’s ok for a character to go back to their car without you telling me what that car is. A whole lot of work went into this book but I’m not  sure how much it was relevant.

On the relevance – Hank and Juliette’s POV were both… questionable. I actually really liked Juliette’s headspace, her diagnosing her doggy patients, her working hard to find a cure; it showed her work, how it mattered and what it meant to her. It was really well written, really well done, I enjoyed it – and it was utterly irrelevant to anything else in the book. I appreciate the desire not to consign Juliette to the plot box but her story felt out of place.

And Hank? Nothing wrong with his head space per se – but he’s on crutches at this point in the series. And they’re mentioned – a lot. And while it’s nice to have a nod to the difficulties faced by someone on crutches especially on uneven terrain, this is kind of the entirety of Hank’s role in the book. He hobbles around on crutches while mentioning how difficult it is to hobble around on crutches and he hates being babied by people who assume he’s helpless on crutches and how annoying crutches are and, did we mention the crutches? Because crutches. Crutches crutches… I wonder if this is partly the fault of the show for not giving Hank much personal life, interests or connections outside of Nick so leaving the author very little to fall back on.

Monroe’s POV was excellent, however. He has a wonderful portrayal of him fighting against his instincts as a Blutbad, trying to help someone else leave the life but at the same time feeling their influence and struggles as triggers for his own struggle and long buried instincts. There are parallels with addiction – but it’s generally very well done, very realistically research and very reasonably compared. The flip side is that the underlying “addiction” he’s fighting is literally rampaging murder – or apparently so – which has a demonising element.

This all came into a story that worked – even with the hiccoughs – and worked within the Grimm setting. I can’t say that the ending was a particular surprise (though it did have some interesting twists along the way) and all readers probably knew what was happening to the murder victims for a while – but I don’t think the point of the book was to shock us with what was happening or to shock us with who the killer turned out to be or even present us with a surprise. It was a book that focused on the investigation itself, on Nick following the clues and the path to the killer that we already knew. It was a pretty damn good police procedural – not using shocking revelations to keep me reading but the steady process of investigation and police work instead.

The action was really well written, we had some excellent red herrings – and some red herrings that turned out to be not so herring-y after all which was a really nice twist. I like some good red herrings, it’s that reminder that not everything in the world, not everything in the Wesen world, is necessarily connected. And just because you’re hunting down a murderer doesn’t mean that suspicious person is involved – they can be suspicious for entirely different crimes just as easily. As a police investigation it really worked.

There was a huge amount of racial and ethnic diversity with the victims – but that was an inherent part of the serial killer’s motives. It’s good to see diversity but there is an underlying assumption here that is… uncomfortable; the comparison of people to food, especially minorities to ethnic food which is always going to be on shaky ground; I think the other diversities of the victims should also have been highlighted (they were there – age and gender, but seemed to be less focused upon).

As a book of the series goes, I think this one worked. It captured the darkness of Grimm and the characters were pretty well conveyed if not necessarily the way I had them pictured in my head. The writing needed some editing though, a little more balance, a little less attempts at fan poodling the original series and a quick look to see how  much of what was in the text was actually relevant to the story. I think it probably be a better book if it weren't so linked to the show - the show sets it up to be more than it is.