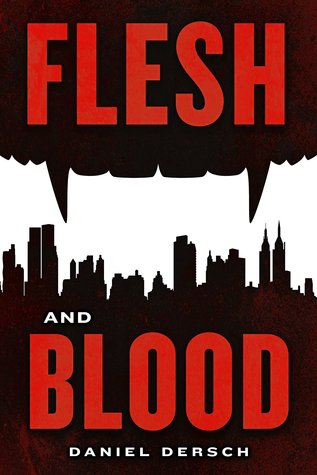 Claire and Amanda are sisters who both live in New York City.  They vow to have a close relationship but Claire's career starts to take off and she finds herself seeing Amanda less and less.  One day, Claire gets a call that Amanda has been institutionalized because she believes that she is being bitten and stalked by a vampire.  Determined to find out what happened to her little sister, Claire begins to investigation.  Let does she know that this will put her up against the Catholic Church who has fought vampire for centuries and make her the alley of a vampire who is the result of Nazi experimentation.

As a protagonist, Claire is very strong.  She absolutely refuses to take no for an answer and always tries to be as proactive as possible.  Even when faced with overwhelming force, Claire is always actively searching for a way to defend or protect herself.  It would have been easy for Claire to place her safety in George's because he is after all a vampire but Claire constantly questions him and even develops plans to ditch him if necessary.  I like that for Dersch, strong doesn't mean turning his female characters into a weapon.

Though Claire is the protagonist of Flesh and Blood, male characters far outnumber female characters. The male characters are not well developed at all and read like card board cut out random bad guys working for a shady organization. The relationship between Bishop and Whitman is particularly confusing. Whitman has been with the organization for many years and this is the first time he has been assigned a partner. I don't understand the level of animosity that he feels for Bishop. Whitman spends most of the book contemplating how he is going to kill Bishop and other than the fact that he has the misfortune of being assigned to work alongside Whitman we are given no justification for his rage.  This took up a large percentage of the story and at the end of the book turned out to be largely irrelevant.

Dersh did give us an interesting take on vampire lore by suggesting Nazi experimentation.  Given the research that they ( read: Nazis) were known to participate in, it gave the story a sense of reality and added reality. Normally, I take issue with people invoking the holocaust but Dersch seemed to make this work.

The only character of colour is a Roma man named Jure Ceres and unfortunately, this character is a stereotypical cardboard cut out.  Jure is of course a con man who breaks into people homes and steals things.  He couldn't possibly be one of the many doctors who Claire talked to, her boss, or some sort of professional because that wouldn't fit the Roma stereotype could he?  To make matters worse, Jure had a small role in which  his sole job is to act as a magical person of colour.  Thanks but no. In a final act of insult, on page 52, Jure is referred to as a "Gypsy" which is a slur.

There are zero GLBT characters in this book but Dersch did find plenty of room to fit in plenty of homophobic language.  Gay is constantly used as a pejorative with both Whitman and Bishop using homophobia to challenge each other's masculinity.  When they are talking about women, such assertions of their hyper masculinity take the form of anti woman slurs like, "bitch," "slut," and my personal favourite, "cunt". At no time did Dersch bother to affirm that such language is highly problematic leaving the reader only to assume that it is bad because an ambiguous character is engaging in such language.

I read the translated version of Flesh and Blood and I can only assume that some things were lost between the German and English version.  Whitman called Bishop a "whippersnapper."  This is beyond anachronistic and really didn't fit with the character.  Other repeated language that at times felt odd were the repeated use of "child's play" and "young man".  It had me wondering what Dersch really meant.  Something is always lost when a work of literature is translated and in this case, I wonder how much it effected my reading of the story.

Despite all of it's problems, Flesh and Blood isn't a bad book, it' just isn't a very engaging book.  As aforementioned, there is an absolute failure to explain the source of the acrimony between Bishop and Whitman and all of the other characters felt very cursory.  Beyond George, we really didn't learn a lot about anyone and that includes that protagonist Claire.  Dersch did include a hook at the end of the book that interests me enough to read the second book in this series should one be published.  The largest issue with Flesh and Blood is that it's just meh.  It's not bad enough to snark and not good enough for the reader to get lost in.