Gender and the Problem with Marie Treanor’s Blood Hunters Series 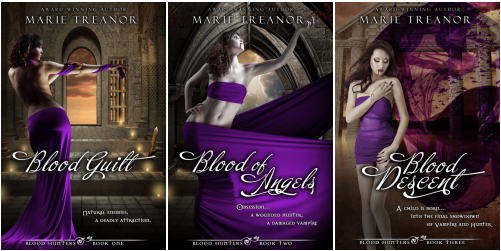 The Blood Hunters Series is a paranormal romance series written by Marie Treanor.  The world is on the verge of learning that vampires who have slaughtered humans for centuries are not simply a figment of the imagination, or sparkling wonders seducing inept teenage girls, but real beings. Treanor relates her tales by shifting through the romance of five different couples.  Each book is focused on a new coupling, though Treanor does take care to connect the separate stories by including characters readers have become familiar with. This creates a form of cohesion that allows the stories to be linked, while building her world.


The concept itself is really quite fascinating. Hunters have been policing the vampire population for centuries and with the awakening of the ancient vampire Salomon, the hunter relationship turns from adversarial to allies who try to work through their mutual mistrust. Each book involves a romance between hunters who carry the ancient gene (a sign of descending from original vampires) and hybrids - what we have come to understand as the modern vampire.  Hunters have special appeal because their blood is considered especially potent, not only because they are descendants but because it is infused with strength from all of the vampire kills.


Despite the new twist on vampire mythology and great world building, when it comes to gender, the Blood Hunters series is fraught with problems and is extremely trope laden. Many of the female protagonists have missing parents or problems with parental type figures in their lives. Mihaela survived after her parents and sisters were murdered by vampires. Janine is rejected by her parents after she turns to prostitution to feed her drug habit. Finally, we have Cyn whose father is dead and her mother is battling alzheimer's. With the exception of the hunter community, these women are isolated. In fairness, most male members of the hunters organization all have some sort of tragic past.  The problem arises in that their interactions with vampires, the male hunters remain in a dominant position, relative to their female love interests.


In Blood of Angels, Treanor subverts the normal vampire narrative by pairing a female vampire with a human male. Vampires are stronger than humans; however, instead of following through with this, Treanor had Istvan restrain Angyalka so that he could dominate her. She marvels at this and talks about her need to be dominated. When we move onto Blood Descent and the relationship between Konrad and Maggie, we are once again presented with a female vampire and human male love interest. In terms of vampires, Maggie is relatively young, as she was created during WWII.  Rather than allow Maggie to be physically stronger than Konrad, it’s Konrad who has the power because his position as the leader of the Romanian Hunters means the power he has absorbed from all of his kills makes him stronger than the undead Maggie. Konrad constantly manhandles Maggie and is physically aggressive with her. Not only is Konrad physically abusive, he constantly threatens to kill Maggie and justifies this as him protecting humans from her predatory vampire nature. At one point, Konrad even chains Maggie to a radiator because he cannot trust her, leaving Maggie completely vulnerable. Maggie passively accepts this treatment, sure in the idea that Konrad can be saved.  Maggie even risks her life repeatedly to save him.


Abuse as love, is common in paranormal romance but that certainly does not make it acceptable. The interactions between Konrad and Maggie are particularly problematic.  The very idea that the love of a woman can save a man, if she is just submissive enough and patient enough serves to place the onus on the victim, rather than the oppressor for ending intimate partner violence. It makes the victim responsible for her own abuse.  This is sexism at its finest and it illustrates how patriarchy manages to justify all manner of abuse against women. In the end, Konrad’s weak apology is enough for Maggie to declare her undying (no pun intended) love, erasing all the harm that was done. Her pain and her abuse serves the purpose of healing Konrad of his demons. Even more problematic, it humanises her. Maggie can only be values because she has been tortured abused, accepted it without complaint and healed Konrad in the process.


Treanor does not limit herself to justifying abuse.  Women of course need their own version of being saved.  This narrative is explored in Blood Prophecy. Janine is a recovering drug addict and former prostitute.  Janine spends a few days with Dmitriu, after which is left nearly dead because of the amount of blood he drained from her. It’s not all bad however, as Dmitriu is the only man ever to bring her to orgasm. Say it with me folks, awwww. Dmitriu’s other gift is the murder of her pimp  and enough money to help Janine get out of the life. Janine is hurt by the payment but manages to get herself clean and joins the hunter organisation.  Throughout Blood Prophecy, Janine refers to herself as a “junkie whore”.  She is the absolute definition of the good girl gone wrong in need of saving.  Dmitriu’s love erases her horrid past and makes her worthy of love and self respect.   It’s rather telling that Maggie is the only female protagonist in this series who does not fall into the category of gently used. She needs to be saved precisely because of her sexual interactions, which not only mark her as “other” but taint her.


There are several tropes to dismantle in this story.  It must be said that not all sex workers have a drug problem and there are certainly women who enter the trade by choice and enjoy it.  This is not a narrative that the media likes to embrace, let alone perpetuate as true because it would affirm the humanity of sex workers.  Janine clearly sees herself as diseased and damaged. Even if this were indeed the case, such a situation is far too complex to be changed by the love of a good man.  The damaged exceptional hooker with the heart of gold has been done to death and each occurrence debases rather than elevates sex workers.


As a rejection of her previous life, Janine refuses to wear any clothing remotely revealing and constantly jokes about wearing a burka.  In the review I wrote:


Moving away from clothing which reveals her body is a signal to the world that her body is no longer for sale.  Can we say slutshaming?  A woman's clothing is not a signal of anything other than she likes what she is wearing.  Several times, Janine talks about wearing a burka.  So now we have slutshaming and outright appropriation.  Burka is a complex garment and should never be used in this way.  For some women it represents a rejection of Western imperialism and a sign of liberation. For others, it's a cage and a symbol of patriarchal Islamic control.  Either way, it is a garment that does not belong in this story and most certainly not as a supposed symbol of Janine's metamorphosis from"junkie whore" to brave, chaste warrior.


Finally, we come to the issue of consent. Treanor’s treatment of consent becomes problematic in Blood Chills. Cyn repeatedly tells Bela that she is not interested in sex but he manhandles her and declares that they will be intimate. Cyn even repeatedly threatens to kill Bela but he can smell her arousal and therefore refuses to accept her refusal of consent as an answer. This is rape culture at it’s finest. No doesn’t actually mean no but try harder until you get a yes.  It suggests that women don’t have real sexual agency and simply need to be seduced by a capable man.  Treanor frames this supposed seduction as romantic and something that all women should desire. Treanor wrote this in a world in which women face a high rate of rape and sexual assault,  in a world in which patriarchy defends sexual violence against women under the guise that the victim wanted it and finally, in a world in which rape goes unreported because the police and media refuse to take it seriously.  The idea that a woman simply needs to be convinced is dangerous and yet Treanor chose to romanticise it.  To be clear, Treanor is certainly not the only one guilty of this in the genre but it certainly does not excuse such a narrative.


When it comes to gender, even when Treanor attempts to be subversive, all she does is reify gender norms which are harmful to women.  Abuse, both emotional and physical gets explained away and justified as romantic. The fact that in each instance the couple in question receives a happily ever after ending, erases the abuse and justifies this as a path to contentment to women. That this stories are part of romance hides the true abuse and harm which is occurring.  It normalizes it.  It sanitizes it and only a critical reading of the series reveals the truth. In many ways the Blood Hunters series is the perfect example of the problematic recurring tropes which continually surface in paranormal romance.


It’s particularly problematic as the Blood Hunters series was written by a woman for an obviously female readership. It is an example of how women participate in our oppression by explaining away and normalising damaging concepts which hurt us. Justifying physical and emotional abuse as a sign of love and undermining affirmative consent turns women into tools which exist to be controlled in every manner, even as it reifies a patriarchal concept of gender. These stories sell because  such abuse has been normalised and because Paranormal Romance itself is rarely subject to a strong critique. It is ignored precisely because it is a genre written by women for women.  If you get the oppressed to do the work of the oppressor, why would they need to intervene?


It’s sad because Treanor is a really good writer.  I enjoy the world she has created.  It draws a reader in only to be pulled away by the continual harmful tropes. It’s too bad that Treanor didn’t trust her gift and voice enough to be confidant enough to subvert the norm because then, The Blood Hunters series would be one worth embracing.