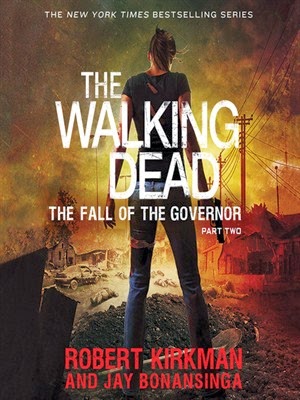 Woodbury stands on the brink of disaster. The Governor – the cruel, ruthless, organised, skilled leader of their community has been horrendously injured by strangers to the town – strangers who have escaped and may come back. As the town fears their return, they also wait desperately for the Governor to wake up, even as the town’s functions begin to fray without his command.

It’s up to Lilly to step into the void. And, when the time comes, do whatever she must – whatever the Governor tells her – to keep them all safe from any threat.

We have had mixed experiences with this series – the problem is they are taking a story that has already been told in The Walking Dead comics and then telling them from a different angle. In the last book, that didn’t work out – we ended up with the same story regurgitated and it felt like rather a waste of time and money.

Thankfully this book is a little different. This book did bring something new to the storyline – it helped explained why. On some level we always know why people follow the brutal dictators like the Governor in dystopias – because he represents safety, because he represents stability, because it’s amazing what you can turn a blind eye to when your life depends upon it, because he’s charismatic and good at twisting the facts and selling lies, because in a dystopian world sometimes you need a monster on your side. We know all this from the many dystopians we’ve read, beyond The Walking Dead, but having a story told from Lily’s point of view, from the point of view of one of those who did follow the dictator, who believed the lies, who ignored the brutality, adds texture and a viewpoint we rarely see in the genre. Sure, we know these things – or can extrapolate them – but how often do we see them step in as protagonist? How often do we see the decisions they have to make, the thought processes – how often do we expect to be in their shoes?

And that’s what we get with Lilly; we get the fight of a pregnant woman in a dystopian world who knows she needs a safe, secure place if she’s going to have any chance to keep her baby safe. We have a woman who doesn’t just like the secure town of Woodbury and the cruel, sadistic Governor who leads it, but beyond a doubt needs both of them. She can’t afford not to trust the Governor. She cannot afford a moral high ground until she has no choice but to face the extremes of the man and his whole edifice of lies.

We also see that in Woodbury itself, the number of people who the Governor – in his twisted way – truly does care for and protect. A protection that actually starts to fall apart when the Governor and his overwhelming personality are not focused on the town – which shows they’re not wrong. They do need him.

This odd choice of protagonist also added a new tension to the action. The Walking Dead is famous for being a series where anyone can die – but let’s be honest, Rick and Carl at least are highly unlikely to ever die. But Lilly? She may be the protagonist of this book, but she’s also set against the series heroes and if it came down to Lilly or Michonne, we know which one’s going to be going down. When you actually step into the shoes of an antagonist, you know anyone can die.

So this book definitely brings a new slant to the series, adds a texture we don’t always see and brings us insight and knowledge of areas that were, at best, only assumed before. This is definitely a good thing. It also shows us a new angle on past conflicts, maybe explain things a little more.

But, this book is still telling the same story that has been seen in The Walking Dead Comics albeit from another angle. I know what is going to happen, I know every twist that’s coming. I know who lives, I know who dies, I know how and why and what… which means when we reach the second half of the book I could very easily start skimming. This is a problem a lot of this book series has had – it’s telling a story that has already been told and pretty much marketed to people who have already read it.

Minoritywise, there’s the group at the prison – but they’re only mentioned in passing (we’re reminded repeatedly how deadly Michonne is – even more so when she’s the one everyone is afraid of) and there are some POC in the Woodbury camp – but the only one who is particularly active is quickly removed from the scene. There are no LGBT people. But Lilly is an excellent character – complex and driven, thoughtful, determined, flawed but willing to learn. She’s willing and able to step up and get things done while not being so perfect that those things are always the correct things to do.

I do think this is better than the last book which, frankly, annoyed me by being such a copy of the comics. This book does bring in something new to the world, a new perspective, a new way of looking at the conflict. It does flesh out the aftermath and help us see what caused the battle to happen and how all these people followed the Governor despite what, to readers of the comics from Rick’s perspective, saw of his blatant evil. I would actually consider this book worth a read and I'm interested in further reading Lilly's story – but large chunks of it are skimmable and are just repeats of what happened in the comics.

If the book didn't have large chunks of redundancy this book would probably have been a 3 or 3.5 Fang book. But with this repetition and our own temptation to skim, we cannot score it so highly