City of Monsters by Andrea Speed 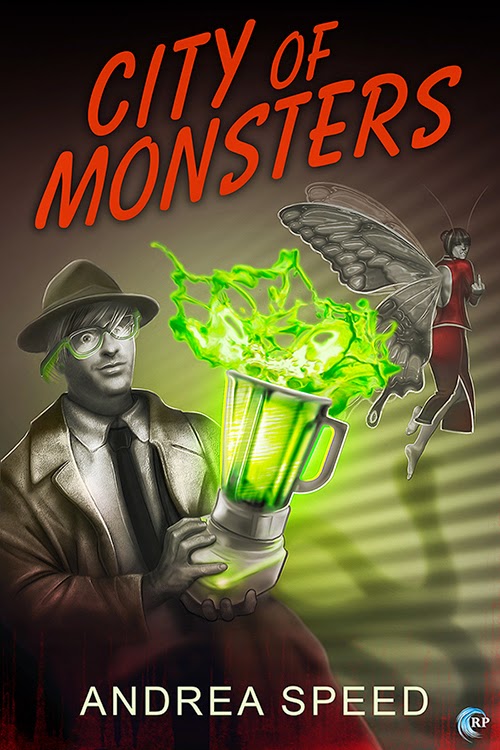 Hunter is struggling to get by as an undefined were in Nightshade – the city where all the monsters live, separate from Earth. It’s not an easy life – shapeshifters don’t always get a lot of respect, especially when you don’t even know what you shift into.

Of course, he doesn’t make that life any easier when he runs up a large gambling debate and has to figure out some way to pay it off – but his work life does become more interesting when completely new arrival Sakari drops in

This has an interesting concept that I wish were explored more. We have a city in a different dimension from Earth, where the monsters live. They have limited connection to Earth, but, for the most part, they’re stuck there. Any human on Earth who, while wandering around, gets all magicy or monstery pings out of existence and arrives in this city to try and find their feet in a world with a vast and incredible array of magical creatures, few rules but lots of customs and angry people you don’t want to fight.

It’s a setting that could be interesting. But like many of the “anything goes” worlds it has more breadth than depth. Everything’s there – but everything could also do with a whole lore more development and exploration to make them more than just random things. There are elements of development – like the werewolves and their disturbing habit of urinating on things – but most of it has great potential that is only really briefly touched and hinted at in this book.

Similarly, the writing style is interesting, it’s humorous, it’s engaging  but it’s very distracted by the budding horniness (which I will get to), trying to squeeze this whole world in through internal musings and info dumping and lectures to try and push this world in

And the story – it’s decently paced. It’s a nice introduction to the world and the characters. The story isn’t unduly complex to distract things but generally gives everyone an excuse to keep moving. Alright not the most awesome introduction to a world but a very nicely serviceable and one that is, generally, decently done – but it’s short. It’s really short, lacks several necessary twists and ends ridiculously quickly and easily. It felt more like the characters were mosying around doing their own thing when they just happened to stumble upon the answer.

Which is part of the main problem with this book – it’s a novella, it’s short – and there isn’t enough room or effort spent on anything; not the world, not the characters, not the story. It’s all far too short, everything is given a lick and a promise. Lots of potential but only really a hint of trying to reach it

To make matters worse, we have a sex obsession. From the very first moment Hunter sees Sakari, that’s it – every other line is about how hot Sakari is. And I’ve read through a lot of Paranormal romance and a lot of Urban fantasy where protagonists have spent their every waking moment drooling uncontrollably over their love interest, but none of them have reached this level. Every other paragraph there’s a line about the many stories hotness of Sakari. Followed by lots of Hunter wondering of he ever has a chance with Sakari and every last thing Hunter does ending up being about getting into Sakari’s trousers. Let Sakari stay at his house? Sure, he’s hot. Let Sakari go along with him on his job? Sure he’s hot. Follow Sakari’s suggestions? Yup, he’s hot. Do risky things he wouldn’t ordinarily do? Yep, Sakari says so and he’s hot. Did we mention Sakari’s hot? Because he’s hot. And Hunter wants to have a chance with the hot guy. And is Sakari using his hotness to manipulate Hunter, Because he’s hot. Let’s mention again how hot Sakari is because so very very very hot. What? Werewolves? Vampires? Sorry, hot Sakari, did we mention Sakari’s hotness? Think it needs to come up some more.

In the end the setting, the story, every other element of characterisation, even the haunted blender, seemed to sink into the background as unimportant or dismissible. Hunter and Sakari ending up together was the first main, and, at times, only point of this book. His motivation, the fact his life was being horribly threatened, all falls into the background because zomg hawt.

Diversitywise the book does well. Hunter and Sakari are both gay, Sakari is a POC, there are several other POC among the side cast. There are definitely numerous minorities with only some problems (the sex obsession being a major one; though I think the Chinese vampire called “Fang” actually works because he points out the very obvious with his name – people are seeing a pun and not an actual name). It’s one bright spot, albeit with some tarnish

But, it is the only bright spot. The book is just unsupported, rushed and undeveloped and with an overwhelming obsession with sexiness to the detriment of just about everything else.