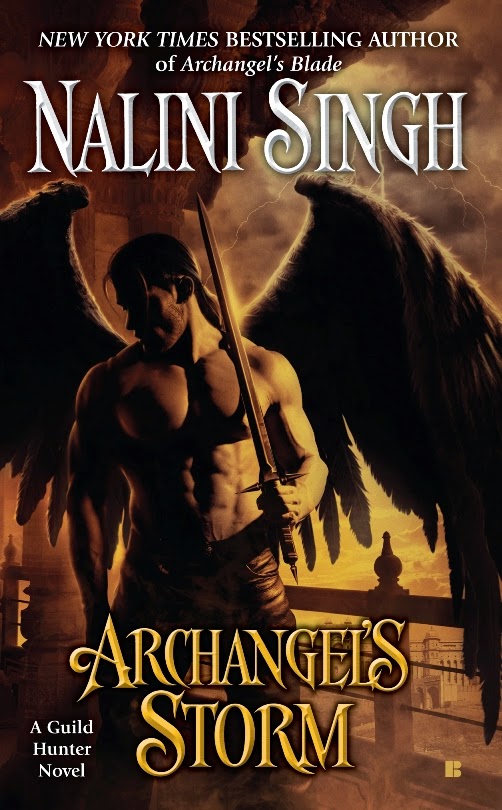 Princess Mahiya is the niece of the Archangel Neha. A privileged position – or it would be if she weren’t the daughter of Neha’s cheating husband and Neha’s own sister. Neha is more than a little bitter and not above using Mahiya as a scapegoat for her parents’ actions

But when one of those parents, her father Eris, is brutally murdered the Archangel Raphael offers to send Jason, his spymaster, to help investigate in the hope of curbing Neha’s growing instability and rage. But for Neha to trust Jason in her lands, she needs someone to bond with Jason – the disposable princess seems like an ideal choice. But Jason sees far more in Mahiya than ever Neha did.

This book has an excellently balanced and paced storyline – it combines character development, mystery and romance in a perfect amount that none of it is neglected and none of it is overwhelming. We have a series of murders to investigate and not once does it feel like the characters are ignoring that mission – but nor does that mission get in the way of us seeing the characters and allowing the characters to show they have their own agendas beyond the mission they have been given. They’re not just servants and we really get to see their own personality. Similarly the romance doesn’t get in the way of the mission and it doesn’t subsume the characters own personality in a wave of oh-how-hot the other is but it still allowed to grow in strength and depth over the course of the book with enough passion to keep it real without the melodrama to make me want to roll my eyes.

I especially like how Mahiya doesn’t expect a long term relationship and though would prefer one, understands if it isn’t on the cards. The best line of this is when someone worries about Mahiya getting her heart broken to which Mahiya accepts it could happen – but that she’d live through it and heal. She acts like a mature grown up – more, she acts like the immortal creature she is and that a bad love affair won’t destroy her.

On top of that we have some nice building of meta – it’s a nice slow burn which I think this story needs because the early books in the series pulled out the vast epic so early that we needed a more slow burn to prevent the idea that vast epic disasters afflict every week. There are lots of questions and hooks left in this world to bring in a vast number of storylines which points to a rich world and a lot of meaty plots to come.

What I loved most about this book is how it flipped the script – both on the last four books in the series but also in the genre in general.

Like every paranormal romance character ever, both Jason and Mahiya have tragic pasts (a tragic present in Mahiya’s case) and Jason follows the same pattern we see a lot of male characters with tragic pasts do – he’s cold and distant and unable to connect with people. He isn’t, however, cruel which is a very nice change nor is he aggressive. His tragic past that still haunts him isn’t treated as an excuse for him to lash out at others – he’s distant, cold and his emotions are dampened. He’s isolated but he doesn’t force that isolation with savagery or cruelty or bitter womanising with the inevitable trail of desperate women who just want to love him dogging his wake (like Dmitri) which is very nice to see.

But Mahiya is even better. She has taken the constant abuse she takes from Neha and found a wonderful strength in NOT becoming like her. She isn’t vengeance obsessed or defined by her hatred nor is she broken or hurting and needing a man to save her. Neither of these would be bad things because people respond to abuse differently, but both are very typically written and commonplace. Mahiya breaks the script. She knows she has strength, she has worth and she has value. While Neha has tried to isolate her, she has found some friends who surreptitiously treat her well. Mahiya’s vengeance is a vow to survive, to escape and to flourish. She is hurting but she isn’t vulnerable, others are much stronger than her but that doesn’t make her weak and she is quite willing to patiently use the immortality angels are granted to get free and have the life she knows she deserves – a life that is based on love and joy and not Neha’s hatred. I love her resolve to be everything Neha isn’t, her determination to be better and her strength to know she is worth better – a strength and realisation she came to on her own, she didn’t need Jason to show her it.

From the very first meeting Mahiya was clearly strong and capable – and it’s a very different kind of strength from Elena or Honor that we’ve seen in past books. Mahiya is subtle, crafty, alert and politically adept and the way it is written is really impressive – Jason is impressed by her but so am I reading about her. I also love how she is quick to put Jason in his place when he presumes to make judgements on her life and actions – she knows what she does and what she has to do to stay alive in Neha’s court; Jason does not and her has no right to criticise her for it. It’s a great scene and Mahiya is an excellent character

This book brings some nice nuance to all the major female characters. It would have been easy to paint Neha as a jealous, spiteful, raging woman – and she certainly is all of those things. But she’s also cunning, adept, a gracious and honourable host and a very good, fair and just queen who is rightly loved by her subjects. She’s also intelligent and more than capable of holding her own against any member of the Cadre. She’s more complex than just an evil enemy and even when she’s cast as someone to fight against in this book we can still see why Raphael may want her as a friend and ally beyond merely fearing her attacks. Even the depiction of Neha and Nivriti fighting over Eris is interesting because even though both are obviously jealous and spiteful of each other, the underlying message is that Eris is really not on par or worthy of either of them. In fact, the whole rivalry between them comes with an underlying message of what a tragic waste it is to have these strong, capable women at odds.

This book takes place nearly entirely in India and the characters reflect that – the vast majority being Indian (with some minor characters from other parts of Asia) including Mahiya, all of which are definitely informed and enriched by their culture rather than it being absent or stereotyped. I especially liked a nice touch in the use of the word “exotic” as being a word for things from a distant land – and characters considering “exotic” things which westerners would consider commonplace (regarding, for example, cherries in the same way westerners may regard mangos or papaya). Jason is a Pacific Islander and his history is a part of his backstory (a tragic one, of course). Even the bit entries come from Elena, Dmitri and Honor, all of which are POC. It’s by far and away a POC heavy cast.

This is another book that erases LGBT people. On the ongoing treatment of mental illness, I did appreciate the cameo of Dmitri and Honor that made it clear that Honor has not been magically cured by the mystical penis of true love – which is always a pit fall.

When this book started and I saw a brand new character and a previously very minor character heading their way to a romance, I was worried – especially when both started dragging up their tragedies. The clichés hemmed in, and I thought this series was going to start dragging down the same very very very well worn path as many before. But it didn’t, the romance had elements that kept it fresh and unique – more, the world was still so very present in the story and the characters, rather than just a backdrop for the characters to fall in love. But above that the ongoing story, personal, plot-wise and meta-wise is still there and still going strong. After a brief dip, this series is going strong again