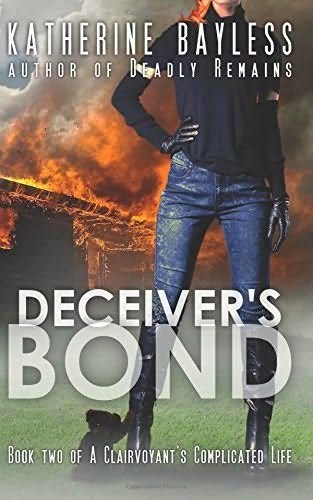 Lire, powerful Seattle psychic and clairvoyant could really use some down time after narrowly surviving a traumatic and near-death experience – especially since she now has 3 new psychic powers to try to assimilate even while she’s frightened of some of the new things she can do.

But there are ongoing effects – the demon Paimon still has forged a link with Lire and is driving her to act to save the world; if she can actually trust a word he says. Invisius is still trying to snare Lire in its own secret machinations…

And then the sidhe appear.

This book seems to be moving in a very different direction, while still using the wonderfully rich world and excellent characters we had in the last book (I loved them so very much).

In the last book the focus was on a demonically manipulated serial killer and, lurking behind him, the sneaky and manipulative Invisius organisation with its mind readers, diviners and the ability to control people’s thoughts. It was a dire threat to face, but Lire had friends and allies and we were all set up to face it

This book takes a sharp turn – and a much broader focus. This brings in the fae and the demons in a much larger extent and we have some wonderful expansions of the world building with both creatures being referenced and developed including an excellent and original reason for why both species actually want to reach Earth (I think this is especially important because so much of the genre works by relying on past assumptions of genre staples. Demons want to invade this world? Why? Because it’s what demons do, right?). It upgrades the epicness of the series and puts things in a far more important context. This is no longer just Lire’s story, but a story on which the world rests.

But Lire is still front and centre of it – her story is still central. We still have Lire getting though her life, excellently handling her psychic abilities that have now grown so greatly and her own self-doubts and worries about that. There’s the added pressure of her normal life being almost unsupportable through all this pressure – even well meaning pressure – and her growing frustration with the very nature of prophecy. Various beings have decided she is the Chosen One to save them all and she has not the time, patience or confidence for such pronouncements. Especially since prophecy is being used as a stick to goad her or a justification for other’s meddling. No matter what the prophecies say, this is Lire’s life and she has no wish to throw it away or twist it irreparably because “it is written”.

It’s still about her which is excellent – because Lire is an awesome character.

One thing the new, epic and fascinating plot lines have done though is brush the old plot lines aside a little… clumsily. I felt that we kind of raced to the new paradigm and the old one was hastily put to bed and banished into the background.

I do find Lire to be annoyingly nice at times. In particular she’s almost supernaturally forgiving and understanding. Especially towards Danny and Kieran. Yes both of them have been put in awkward situations like Lire, but the situations they’ve been put in have caused them to directly affect Lire’s life. Danny has invaded the minds of people round her, changed their lives, rearranged her neighbours, her work and regularly kept secrets from her. Kieran was sent to seduce her (which is a very very broad definition of what he was expected to do) and fought with her while Maeve did her thing with Vince. Sure they are in terrible circumstances and are acting with the very best of intentions but I think Lire is being something of a saint to be as forgiving and understanding as she is. I would definitely have stabbed a few people with the silverware over dinner by now.

I feel like there’s some severe downplaying of what’s happening to Vince. A lot of the framing is about how he has left Lire and isn’t interested in her or has otherwise betrayed her trust or wasn’t that into her (and there was certainly some indication that he wasn’t that invested before this so it’s not without reason); but Maeve has the demonstrated woo-woo power to sexually enthral people. We saw this in Lire’s reaction to Kieran and her outright accusation of attempted rape, we saw Maeve use her power. To present Vince this way is to miss the more likely scenario – that he is being magically raped. This is even more problematic when Lire outright says “I don’t think it’s even possible to rape a guy.” Yes, it is. If you have sex with someone without their consent, it’s rape – their gender is irrelevant.

Both of this comes together to form the foundation for Lire and Kieran’s almost inevitable relationship which I really didn’t care for. It’s like they were obstacles to this relationship (Vince’s situation and Kieran being her enemy) so they were both hurried over. I know Lire is hungry for touch and Kieran is super-duper hot, but Lire went from loathing the man and everything he stood for, to willing to pick up curtains and set up house with him within a week. That was enough to give me whiplash. It meant any conflict about whether or not she hated Kieran came off more as relationship “he doesn’t really like me!” drama than “should I stab him in the skull while he sleeps?” drama. I don’t mind Lire or Kieran as characters nor am I against Kieran and Lire being a couple – but I’d prefer it to happen without the fast-forward button pressed down and I’d definitely prefer it without the added pressure of them needing to magically bond for political reasons. Coupled with the whole “we have woo-woo that smashes consent” and it just doesn’t work well for me

When it comes to marginalised people we have a mixed bag. One of the gay guys who live next door (which is quite literally the entirety of what we know of them in the first book) appears to say he’s going away for a long time – and then we never ever see him again (why are these characters here). We do have a female bisexual couple who are interesting in many ways – not least of which because they are capable, strong, skilled and have power, goals and agendas in their own right (which helped a lot – because other than them and Lire the only women of note in the series is the secretary who is relentlessly slut shamed and Maeve, a sidhe with evil sexy magic). The problem with their characters comes from the fact one of them is bonded to a male sidhe who “allows” her relationship with another woman… because he likes to watch. Kim openly says her relationship with Jackie would be over if he decided he didn’t want it. Bisexual female sexuality existing for the pleasure of and at the tolerance of a straight man is a toxic trope that I could do without.

We have some minor POC – an Asian psychic at the beginning of the book and a few minor POC in the odd office but that’s about it sadly. It’s small minor bit roles.

I ended this book liking a lot about it – I still love this wonderful, rich world with all of its different takes and deep insight into the psychic abilities within the world. I love how it’s all connected and really gone into detail for the full implications of what these powers mean. I love Lire as a character. I basically love everything about the series I loved in the first book and they’re all continued in this one

But it feels almost like the author changed her mind about how the story was going to go between the first and second book – now it was going to be a story largely focused on the demons and fae. So everything else that didn’t fit that had to be rather roughly cast aside – Vince, Invisius and the nature of Paimon – they didn’t fit the new direction so they’ve been pushed out and it isn’t done in a particularly smooth fashion.