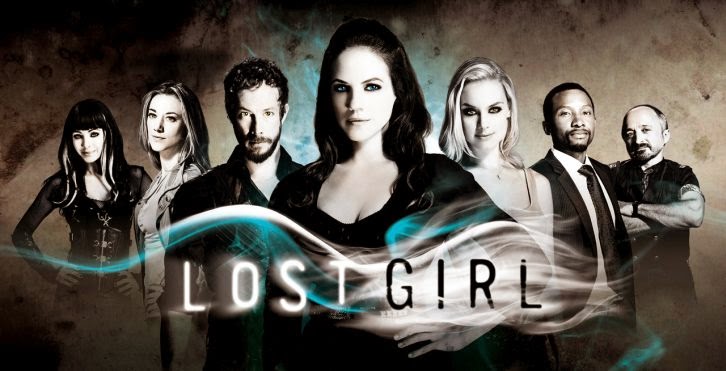 Last season in its very very very oh-so-very confused finale, Kenzi sacrificed herself for Bo since she was Bo’s heart. Bo is still very sad about this, we see, as she rock climbs in a desert to retrieve a shoe from a nest. That would be one of the evil hell slippers (did I mention that last season was confused? And more than a little weird? Because it was – and evil hell shoes were part of it). Hurrying to climb down to avoid a trap, she falls – and gets really nastily wounded at the bottom. She’s found by three not-very-nice men who want to take her home and “take care of her.” Why which, it’s implied, they mean rape.

She devours their chi (just sucking in all three of their chis, she seems to have mastered this distance feeding on multiple targets thing) and heals. She leaves them alive but incapacitated and leaves with her Hell Shoe.

She goes home which she now shares with Tamsin who has hidden the other shoe (last season she did say that Bo couldn’t have both shoes. I think. That season was confused). Bo’s plan is to put on both shoes because they can get her into Valhalla (Odin appreciates ballet slippers?). Tamsin (who still seems oddly childlike after her rebirth – yes, last season, yes confused) says she can’t go because she won’t come back for Reasons (she can’t say). When Tamsin (a Valkyrie) took Kenzi’s soul to Valhalla, something terrible happened which still gives her nightmares – but she can’t explain what

Bo goes to the Dal where Trick and Dyson are where Bo makes it clear she won’t be talked out of saving Kenzi. They give her some well wishing (and Trick wants her to pass on good wishes to his wife, Bo’s grandmother) and Dyson’s declaration of love for Kenzi and fealty for Bo.

Over to Lauren who appears to be in some kind of fae hospital (judging by the man breathing fire) and Bo arrives with the Evil Shoes, worried about the side effects of malevolent footwear. This is why she’s come to Lauren to monitor and drug her in case she goes on a shoe inspired killing spree. Yet despite that, while Lauren describes all of the many precautions she intends to take, Bo puts on both shoes. They sink into her flesh leaving her barefoot. Lauren hurries over but Bo vanishes.

Bo appears in pretty ritzy looking surroundings to be met by a woman, Freyja, who tells her she’s late. She’s in Valhalla and the woman has mistaken Bo for the florist. Valhalla has a florist and a Turkish Spa apparently. Freyja advises Bo to check in and before Bo has any wish to say she isn’t supposed to be there, a woman who isn’t in their system is declared “a stray” and Freyja pauses in her florist troubles to open up a fiery black portal and dumps the interloper through it. Some hotels have the strictest anti-riff-raff measures.

Bo goes to the desk to try and find Kenzi but the receptionist refuses to touch her, meaning she can’t use her succubus powers. Plan B involves succubussing a maid. Having stolen her uniform she goes in search of Kenzi (which involves sniffing buttons for chocolate). She goes into a random room that happens to be the right one – and finds Kenzi. Screaming, babbling and hugging follows.

Kenzi describes just how amazing the place is though, oddly, she also gets heavy breathing pervert calls. She also receives a message from Hale saying “see you soon”, which also seems to link to a party she’s supposed to be hosting – a marriage between her and Hale. All of this unknown to Kenzi. Kenzi is faced with a choice of leaving with Bo or really seeing if Hale is there – she tries to convince Bo to leave, presenting it as obvious – but she’s clearly conflicted and Bo says she should stay if she is actually happy in Valhalla and if Hale is really there.

In the real world Lauren goes to see a very unco-operative Tamsin. After Lauren awesomely shames her quite cuttingly, Tamsin hands over her diary so Lauren can learn more about Valhalla. She also orders Tamsin to go help Bo – Tamsin protests she needs a soul but Lauren happens to know of a patient who is dying at the hospital and when Tamsin tries to pull the “you’re just human” routine Lauren throws back “we’re all made sacrifices. Except for you.” Lauren isn’t pulling punches this season.

Lauren goes to the Dal where Trick explains that Valkyries are actually incapable of telling about Valhalla and if they do, they die. Reading the diary and with Trick’s explanations, we learn that the dead end up in several different afterlives (including Valhalla and Tartarus, which has been mentioned twice now so will be relevant) and the Hell Shoes allowing non-Valkyries to reach Valhalla; the shoes also allow the wearer to collect souls to form a Dark Army with which they can end all life. Again I say that shoes that ominous should look a lot more awesome. Trick asks the pointed question why the Evil Shoes only work for Bo and, in case we’ve missed it, makes it clear that Ominous Things are happening

Their plan is to use Tamsin’s hair to trick to gates to Valhalla to open.

Tamsin flies her way to see Freyja, give her opinion on furniture colour and we are reminded that Tamsin made a deal she made with Trick for extra lives; which she claims she’s going to use for redemption/forgiveness. Freyja seems sceptical especially since the soul Tamsin brought doesn’t meet her standards. We also meet Stacey who isn’t Tamsin’s bestest friend and implies Tamsin is fat (because even for supernatural beings implying a woman isn’t dieting is apparently a killer insult) – Tamsin is in the outs with the other Valkyries.

Freyja has a soft spot for Tamsin and has looked out for her (and there is definitely a flirtatious edge) but her patience seems to be wearing thin – Tamsin asks about a “Liberation”, fae and humans in Valhalla when it’s not their time, which is apparently naughty. Tamsin offers to do anything – and a phone rings which apparently worries Tamsin. Freyja talks about having held “him” back and who Tamsin “has to be”.

She picks up the phone and recites the description the Wanderer gave her when he first hired her to find Bo, adding “she’s yours.” Despite her earlier reluctance, she smiles as she tells him.

Confirming the personality change, she goes to the lobby where she meets Kenzi, excited and babbly about her wedding, and all Tamsin asks is where Bo is – and even menaces Kenzi. She talks about redemption, her full potential and when babbling doesn’t work, Kenzi hits her with a big stick which does nothing. Kenzi runs, or as much as she can in those shoes.

Bo is looking for wedding stuff and runs into Stacey (Valkyrie) who isn’t that affected by Bo’s succubus touch – apparently Freyja was all fine with Kenzi’s wedding because she’s such a perfect warrior, but now Bo is around, Stacey is suspicious. Talking to Stacey, Bo realises it is actually Hale coming to the wedding and realises she’ll have to say goodbye. Stacey makes another ominous reference to “him” when the phone rings.

This leads to Kenzi pretending to be a foreign maid (really, Lost Girl, really?) and Tamsin re-enacting Shining with an axe. Kenzi runs out the window and Bo arrives – so Tamsin tries to axe murder her. They fight and Bo uses the succubus touch on Tamsin, breaking whatever weird spell had taken her over. Tamsin sobs and Bo tells her that’s her last strike – no more chances if she comes after them again which Tamsin fears because she doesn’t want to give up the family she’s won in her last life (wait, didn’t she get more lives?) And the phone rings and Tamsin says it’s her employer – someone even more powerful than The Wanderer

Time for the wedding. Bo and Kenzi have a beautiful moment where they describe what they mean to each other and Bo says Kenzi has to stay. But in the room, Bo makes Kenzi stay behind her while she checks the altar, ominous music plays – but before they reach the altar Hale vanishes. Freyja has intervened.

Apparently because Kenzi closed the gates of Hell her soul is already claimed by Bo’s father (who may or may not be the Wanderer). Bo offers herself in Kenzi’s place, apparently Bo’s dad’s master plan after all – but Tamsin has a loophole; as Bo’s claimed human, Bo can fight for her – but in their argument last season, Kenzi made Bo renounce that claim. Kenzi is returned to Earth and Bo is dropped through a portal.

Stacey stays to taunt Tamsin – because with Kenzi gone there’s now a missing soul and Stacey will claim another one, close to Bo’s heart.

Back to Bo and Lauren, who use Tamsin’s hair and diary to open the Gates to Valhalla. Lauren is possessed by a Valkyrie to tell Dyson that Kenzi has been returned – and that he’s trespassing; Tamsin’s hair burns away

Kenzi wakes up inside her coffin.

Y’know, the Evil Shoes needs to be more dramatic. Big leather stompy boots or something. They could at least be red.

Kenzi’s conflict is very well acted and presented – she loves it in Valhalla, she clearly thinks it’s awesome but at the same time feels she has to say how terrible it is, has to believe it’s terrible, because to do otherwise is to admit she’s happy without Bo or that a part of her wants to stay there without her. This follows on to the wedding and Hale – Kenzi almost wants to believe it’s not real because if it isn’t then there’s only one choice – Bo. But if it’s real and she can be with Hale and happy in Valhalla then she has an impossible choice to make: stay in Valhalla with Hale or go back to Earth with Bo

Ok, I’m a little confused but finding my feet with this new episode of a new season. I don’t think this is actually a problem with the episode, but last season was such an utter trainwreck of complete confusion that it’s hard to get my head round it (for example, I kept getting The Wanderer and Rainer mixed up. I still don’t know if they’re the same person or not). Add in people dead and not, afterlives, Tamsin’s complexities… and, again, the utter trainwreck of the last season and it’s taking me some time to get it all together.

This episode wasn’t bad and I hope things are going to be tighter and clearer – but it’s resting on the shaky foundation of last season’s train wreck.