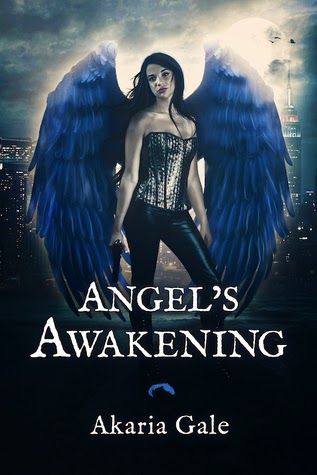 Charouth is trying to redeem herself after a 2,000 year old love affair got her demoted from Heaven’s elite. She is now poised to reclaim her position as she searches for Artefacts that could be the keys to Satan’s prison

Only Hell has their own agents searching for these relics – including Azazel, her old, long missing lover.

This book has a lot of intriguing elements. We have a lot of angelic politics with the Archangels clearly following their own agendas and Charouth being caught in the political machinations of her superiors. We have a world that has a number of mythologies and something clearly epic beginning with the Norse and the Titans at war – a conflict that catches Charouth in the cross fire.

And we have a world where the supernatural rubs elbows – up to and including the Angels and the Fallen interacting. They’re not exactly friendly, but the overt antagonism that you’d expect is definitely lacking. There’s a lot here that could be developed and I was really looking forward to discovering it all as Charouth and Azazel competed to find an important artefact

This potential is just lost, however. Because 80% of everything Charouth and Azazel think about is each other. Over and over and over and over again we’re “treated” to lined, paragraphs, entire pages of how hot/sexy/yummy the other was, how good they were together, how much they missed each other, how important the relationship was to them, how it was Charouth’s first relationship (because of course he had to be more experienced than her) and generally the many many ways and times they want to have lots of hot sex.

This is then mixed with lots and lots of Azazel being super jealous because in the TWO THOUSAND YEARS they’ve been apart Charouth has allowed another man to touch her. The very idea, how could she not just wait for him forever and ever and ever! No, really, he expected her to wait. He’s amazingly jealous with lots of planned vengeance against another angel for sleeping with Charouth and even having an epic temper tantrum because she is wearing a leather bracelet he assumes her lover bought it for her and how very dare he!

On top of this Azazel devotes a ridiculous amount of time to planning how to avenge Charouth when anyone wrongs her. Or how to protect her. Charouth is an angel. Charouth is one of the elite – that means she’s second only to the Archangels in terms of angelic important. She does not need Azazel to protect her avenge her or otherwise be the big strong man for her. Stop this.

This romantic obsession consumes the book. It is utterly overwhelming to an extent that it eclipses everything else. This is especially annoying when you consider the plot – they’re trying to find an artefact that could release Satan. This is, obviously, a major concern for Charouth. Apparently. So we’re told. Because she never acts like this is something that important to her – and nor does Azazel. So much so that I don’t even know why Azazel is on board with this since he doesn’t seem to be remotely a fan of Satan so… what is he doing and why? I don’t know because he just eternally focuses on Charouth, mopes about Charouth, stomps and rages about Charouth, lusts after Charouth and storms around in a big emo funk because Charouth has rejected him and it’s soooo unfair precious!

The romance is the main complete barrier to the plot – but Charouth also makes a lot of bewildering mistakes. She finds an important artefact – and then decides to go drinking in a demon bar (so she can randomly do some psychic karaoke… no, really). She has this precious artefact she needs to get back to heaven asap – and she takes time out to go drinking. WHYYYY?

And there’s this human who keeps summoning her and dishing out orders. He becomes more and more dictatorial each scene and she just ignores it. This guy couldn’t possibly be more ominous if he had a large moustache that he kept twirling – but she completely ignores him, treats him as a random distraction and then goes back to whatever she was doing before (having sex with Azazel).

Now look back at the behaviour I’ve described here and remember these are millennia year old angels. These are super ancient, mighty beings of infinite experience. Apparently they’re not rather immature teenagers.

Diversitywise, we have a lesbian couple who own a bookshop. One of them is a vampire and is Asian. They’re a teeny tiny part as both Charouth and Azazel use the shop to do research. What really annoys me about this portrayal is that a gang of the angry cult humans burst in and threaten the shop assistant with guns – and her vampire lover slaughters them. Charouth then mopes terribly about these “innocent” people being slaughtered in such an evil fashion. There is no acknowledgement of what the cultists were doing.

There’s another gay character who is a minor sidekick of the minor villain – he basically follows orders and provides services to his boss, even though he has some level of moral qualms he squashes for the sake of obedience.

As to POC, there’s that Asian vampire, Kissera – and I know she’s Asian because she drops into Cantonese to insult them. But I don’t know the race of anyone from their description – not even the protagonists. I spent most of this book trying to figure out if Charouth was a WOC or not and, to be honest, I’m still not sure. The descriptions are too ambiguous and it’s like that with every character; which leaves me saying POC are not well included because even if they are there, they are not portrayed.

There’s the bones of a good book, a good story and a good plot under hear. But those bones have been more deeply buried than your average dinosaur skeleton and instead we have terrible decision making, one of the most angst ridden, trope riddled romances I’ve had the displeasure to read and some main characters I’d cheerfully beat to death with my own tablet rather than have to read another world of their internal monologues. Nice concept, but the execution is lacking.