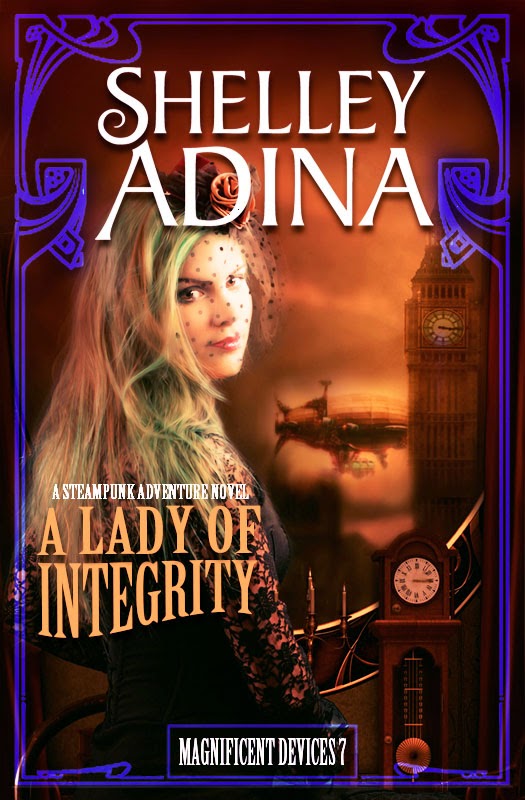 Claire has finished the university and she is ready to begin her position at Von Zepplin’s dirigible works. And she has a wedding to plan to her fiancé, Andrew. The Mopsies are returning to school, everything is looking up
When Alice arrives who has lost everything – including her first mate Jake, and member of Claire’s extended family. He is being held prisoner by the Doge of Venice in what is little more than an extortion scheme. The politics of the situation are tricky and there are few people to intervene beyond Claire herself.
She has never abandoned her flock in danger
It’s another swashbuckling adventure for Lady Claire and her flock, the excellent Alice, Elizabeth, Maggie, Tigg and Andrew


And I think that’s the first thing I want to praise about this – I like most of the flock. Most of the characterisation has fallen on Claire, Lizzie and Maggie, of course, since they’ve been the main protagonists but every character has had some characterisation. Even though she’s the protagonist, Claire doesn’t exactly eclipse those around her.
The world setting has expanded nicely – we’ve already seen adventures in North America and some insight into France and Germany, while this book moves to Venice with some nicely original ideas and concepts. I like that even when we don’t look in great depth at the politics of all the places Claire has passed through, there is a sense that a full system has been developed (even if it is not info-dumped on us).
The adventure itself is fun, lots of action and plotting, some plans that go awry, many members of the party using their talents, their intelligence and their creativity to cobble together success as nothing quite goes to plan. It was a fun romp in which Claire and her flock got to remind us just how awesome they are on a regular basis. I won’t say the story was especially twisty or nuanced or complex – but it was fun, a nice adventure story we kind of knew how it was going to end, but it wasn’t any less fun because of that
Like the rest of the books in this series, Lady of Integrity contains a lot of challenges to sexism that is both accurate to the period and still very much in evidence today


I also really liked the direct challenge to the idea that a man wants to keep his beloved woman safe because he worries for her – throwing back the equal challenge that women worry about the safety of their beloved men as well, but everyone expects them to deal with it. If Andrew wants to keep Claire safe out of fear for her and he couldn’t bear to lose her, why shouldn’t Claire feel the same about Andrew? It’s a common excuse but it’s a weak one.


We also have numerous male characters completely speaking over Claire, refusing to listen to her input or allow her to be involved and, ultimately, making an utter pig’s ear of things and leaving Claire and the rest of her flock to try and sweep up afterwards.
Ok, there are a few female lead steampunks now, we’ve certainly read a few, where the kind of overt, very period-defined (though far from limited to the period) “marry a rich husband, have lots of kids and don’t do any of that tricky thinking, you pretty little thing” sexism is challenged a lot (which is nice to see). But Lady of Integrity takes it beyond challenging this – by addressing the idea of a woman having to choose between her career and her family (which is overwhelmingly prevalent – as even full time employed women are expected to be full time child carers and home makers as well).
This pressure comes not just from enemies and condescending fools around her – but from some of her closest supporters like the Count Von Zepplin. Von Zepplin does not, even for a second, doubt her ability to work for him or her skills as an engineer – quite the opposite, he has openly headhunted her and values her skills to an extreme degree. But even with all her confidence in her abilities, he has doubts about her priorities especially as a woman about to get married and, inevitably to his mind, have babies. Coupled with her already extended family in the Mopsies, Tigg, Jake, etc, Zepplin clearly fears that while Claire is a capable engineer, being a mother (or a mother figure) will distract her and mean she will not focus on his business. This same argument never applies to him (because he has a wife who focused on his family) or Andrew, Claire’s fiancé (because the idea that he may be the familial figure is so alien). This pressure is placed on Claire, by people who value her intelligence the most, to abandon one of her flock to prove that she will put her career first, to prove that she is worth investing in. The subtext is clear – a family-oriented Claire is not worth the investment, no matter how intelligent, creative and dedicated she is.
This is the test of Integrity of this book – the sexist demand to choose between family and her dreams and Claire staying true to herself and jeopardising the latter, because she will not give up the former.
And I can understand people saying for her to leave it to others – because we all know this genre is full of random busybodies who decide to throw themselves into police investigations/wars/apocalypses without the slightest idea what they’re doing – but Claire has shown her competence time and time again. Not only that, but she did seek official help and it was clear that, because of the delicate politics of the situation, official help would be limited at best. I appreciate that – I like that some thought had been put into explaining why Claire was doing this, rather than doing the genre staple of having the protagonist blunder in way beyond their competence.
There are other excellent elements and challenges I like – like the Mopsies involvement despite Claire’s own wish to keep them safe. Now 16 years old and having survived adventures of their own with only limited intervention from Claire, they assert their own right to be involved in the rescue and protection of their family. They defy Claire without disrespecting her, insisting on being involved while not challenging the leadership he’s earned – it’s a nice balance and I really appreciate it. I also appreciate that Liz and Maggie really aren’t the Mopsies any more – they’ve had their own adventures separately, they have their own distinct personalities and thought processes. Their individuality has been established.
I also liked Gloria Merriweather-Astor. It would have been so easy and so in keeping with so many tropes, to make this character a Mean Girl or a Ditzy fool. She is neither – she is an intelligent, moral actor in her own right (though a sad and desperately lonely one) and it’s another element I love about this books; from Claire to Gloria to Alice to Lizzy and Maggie to Lady Dunsmuir, the women in this series generally like and respect each other. Other women are not required to be lesser – weaker, more cowardly, less intelligent – in order for Claire to awesome. She is not an Exceptional woman, she is an awesome woman among awesome women.
I also appreciated the little mention of Jake still funding and protecting the house they had way back in book 1. Claire may have gone up in the world, but she still has that home, that extended family and the children she keeps safe from the streets, not just Lizzie and Maggie
Tigg is the only POC in the book though there is quite a large cast of characters – he’s a decent character who is non-stereotyped and is constantly present. He’s also building up a nice romance with Lizzie which I like. But I can’t really point to anything Tigg does beyond “be there”. There are also no LGBT or disabled characters
I think one of the most enduring elements of this series that always makes me come back to it with a smile is that it’s fun. Yes, it has great characters, an interesting world and some excellent challenges of sexism that I love – but what makes me really happy to come back to it is just how fun it is. Fun is underrated, especially in literature where too often fun is deemed to be frivolous and somehow demeaning for a book. This is fun, it brings me joy and that’s a good thing.