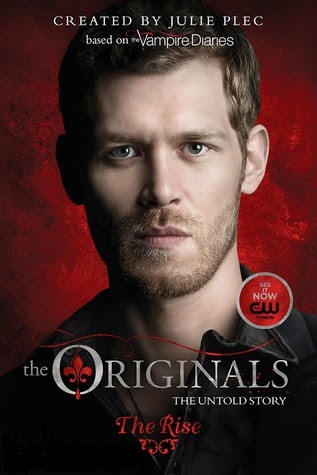 The Original family, Rebekah, Elijah and Klaus, have arrived in the new colony of New Orleans and plan to make it their home. They’ve been in the city for 9 years but are being kept out of the city thanks to Klaus’s little… problem with the local werewolves.

Elijah has been working on a slow plan for acceptance and hopes that they will have more opportunity now a wedding between the witches and the werewolves may ally the two factions. Except little brother Klaus is now enthralled with the fiancée – this cannot end well.

Rebekah and Klaus pursue their own agendas and all of Elijah’s plans may be headed towards the predictable rocks of his sibling’s machinations.

The funnest thing about this book is how the very essence of the Original family from The Originals is so very clear in this flashback to their early history in the city.

There’s Elijah, moving slowly and diplomatically, obsessing over keeping his family together and trying to slowly build themselves a place of respect and presence in the city through the most civilised of means (all the while frustrated by his siblings, especially Klaus). Up unto a point… and then you cross the line and Elijah is DONE and he reminds us all that he’s an Original vampire and he is not tolerating any more of this

And then there’s Rebekah who tries to be sensible and follow Elijah’s lead – she’s also cunning and, in some ways more crafty than Elijah because she’s far more underhand. But she’s also a romantic and easily derailed by her heart which puts all her plans awry.

Then, of course, there’s Klaus. Unsubtle, uncaring, reckless, impetuous and completely uncaring of consequences. But this book adds an interesting nuance to that by having Klaus basically embrace what it is to be an Original; there’s an awesome line:

“Vivianne would be angry – Elijah would be livid – but eventually everyone would agree that the world had not come to an end because of one dead werewolf. Time would prove Klaus right; it always did.”

When you live forever, there’s a lack of long term consequences. Eventually you outlive the consequences of your action – nothing is a problem if you take a long enough view.

Of course, all of that is derailed by Klaus sharing the same weakness as Rebekah (even though he is immensely contemptuous of Rebekah’s loves) – he’s passionate and obsesses with Vivianne. Much to Elijah’s immense frustration (poor Elijah).

What’s also interesting is that this is New Orleans as a new city full of supernaturals that have little to no experience of vampires, let alone the Originals. It made that wonderful epic moment when the Originals finally declare “that’s it, we’re done” so much more epic; while at the same time not detracting from the power of the werewolf and witch clans that control the city. There was plenty of epic to go round.

I liked the story because I like The Originals because it took these characters and was so quintessentially them. Their voice was perfect, exactly how I’d imagine them from the TV series. The plot line also went down classic Originals lines – so calm, so careful, led by Elijah’s caution and honour and manners…. And then all falling apart (in part because of Klaus) until eventually the Originals stop playing.

What this book lacks severely is representation. There are no LGBT people, there are no POC (in New Orleans!). The one plus is that Rebekah is surprisingly capable and that Vivianne, Klaus’s love interest, is far more than just a pretty face.

I’m also a little dubious about the setting – this is historical and I honestly forgot at times. I just didn’t get a great sense of time and place out of this book which starkly contrasts with the vivid characterisation. Additionally, because the book is so classic Originals I kind of expected what happened to happen – it was still fun, but it was predictable.

This book is classic The Originals – this is the characters displayed perfectly, their mindsets written excellently on the page and their plans, plot lines and stories writ again 300 years in the past. Even as things go forward to the modern nights, we can still clearly see their same base personality that is still not overtly changes in all those centuries. They’re not just recognisable as the characters from the show – but the book is recognisable as a storyline in this world setting, following these themes. This is a great book if you haven’t watched the show – but it’s an excellent book if you have.