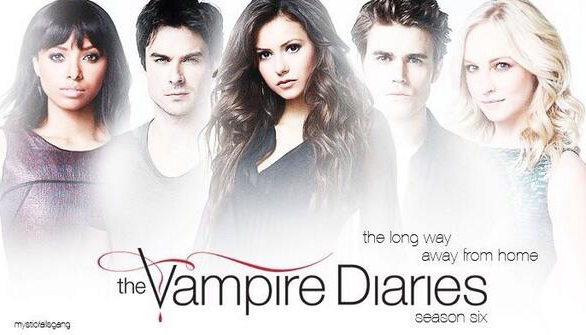 Bonnie wakes up (so she isn’t dead) in her Improbably Huge Dorm room (seriously, I’ve lived in flats about half the size of this room and my flat at uni would probably count as a closet to these women). She has a disturbing dream about Kai and Lilly coming to get her - and then wakes up to the far more horrifying reality of Elena coming to get her


It’s Jo’s wedding. And they do wedding things that involved weddingness. Caroline has gotten through her funk over all the death to join in playing weddings.


The good part of all of this is seeing Caroline organise stuff which is always fun, and Caroline treating Elena like she’s made of porcelain because she decided to throw away her super powers for no damn reason.They also take the time to discuss Caroline’s need to apologise to everyone for the fun murder tour and Elena turning human and Damon offering to do the same.


Stefan, meanwhile, is taking Damon on a grand tour of mundane humanity and how it’s really not Damon’s thing. It’s actually a really good demonstration of the many things a 21st century human has to deal with that Damon, with his ability to kill and compel, never has had to worry about. He also throws in that Stefan won’t be able to see him - because if he knows where Damon is someone could torture the information out of him to find the location of the cure (doesn’t that apply to Elena right now?)
But Damon has already invested money in creating Elena’s dream life - Stefan is impressed and calls Elena to tell her that. She urges him to keep trying to get through to Damon and Stefan drops a bombshell - what if Damon and Elena split up like many (most) couples do? Especially with the added tension of Damon being human. Damon becomes bad tempered and violent but Stefan keeps hitting him with hard truths. Including that Elena, being a fragile human, could just die and leave human Damon alone.


he ends with the excellent line “you can’t do this for me or for her, you have to want to be human for yourself.”


Enzo drops in on the Salvatore house to give a present to lily-who-isn’t-dead-for-reasons (but then, the same applies to Enzo). And in a classic example of broken morality, Enzo who has killed many people for shits and giggles says Bonnie would be a complete monster if he didn’t pass on the present. Murder is morally fine. Not giving thoughtful gifts is just monstrous. Gift giving is curtailed by Lily (who should be dead) trying to strangle Bonnie (who should know better than to stand that close to the bars).
Bonnie explains to Elena that she’s really not  fan of letting Lily out and they can’t be sure she can’t get her evil family of evilness back. She speaks to Matt about not being a fan and he has a big stash of weapons ready.


They decide to go kill Lily just before the wedding (vampire ash looks so good on wedding clothes) only to find the cell empty - and woo-woo chokes them both unconscious.


Lily goes to catch up with Enzo. And she’s no longer a ripper - because she’s getting her family back.


On to wedding, Caroline apologises to Tyler for various humanity-off badness and Liv shows up, belatedly remembering Jo is Liv’s sister so she should probably attend the nuptials. Liv and Tyler talk and she gives Tyler the chance to apologise for being utterly awful and he fails dismally. Also she puts losing Tyler in the same category as Luke being murdered so it’s just awful on all levels. Sh does say that there’s a load of Gemini on the way to the wedding. Tyler snarls at Caroline for her completely unwelcome relationship advice.


I think Jo gets tired of absolutely no-one focusing on her wedding for more than 5 minutes and she faints. Then is declared well in the hospital. Elena tells Alaric and manages to turn Jo fainting on her wedding day into a worry about her not being a vampire anymore. Even for Elena this level of self-centredness is breathtaking.


More weddingness and Jo is visited by her dad (who tried to kill her with a twin merge. Bygones). Of course he wants to walk her down the aisle.


Caroline and Stefan finally talk and she addresses Stefan’s mishandling of their relationship as part of the reasons why she turned off her humanity which turns into discussing the inherent lack of control that comes with falling for someone - hard for Caroline who so desperately needs control. Especially now.


Stefan and Elena meet up and Damon explains how Stefan had convinced him to stay a vampire - until he saw an old couple still very much in love (AAAAAAAAARGH you know what? If you had BOTH remained vampires then you could have STILL had those decades - CENTURIES - of love. Why does the addition of wrinkles and arthritis make long lasting love more special?). So he’s going to become human for Elena - and yes, he IS just taking the cure for her (or “us”). Bah bah bah.


They kiss (in the centre aisle of Jo and Alaric’s wedding. That has to be tasteless).


Caroline chews out everyone for being absent when the wedding was starting (Elena and Damon have skipped the wedding to have sex. WORST FRIENDS EVAH!). Bonnie and Matt being suffocated is a much better excuse (they wake up and Bonnie has been bled for her ascendant powering blood). The wedding begins and of course Jo has forgiven her murdering father. Sappy wedding time with a brief moment of horror when you realise “Jo” is actually short for “Josette” really?
Oh and Kai stabs Jo during the wedding before using magic to control the whole crowd with agonising pain (this is a crowd made up of literally dozens of Gemini witches…)

Part of the problem with this episode is that Jo and Alaric are irrelevant. Not only are they irrelevant, but they’ve been irrelevant for a long time (I could say “forever” in Jo’s case). So having a story arc that is all about two irrelevant character’s irrelevant wedding is a problem - because the chances of the audience caring are limited. Especially when you’ve got things like Damon turning human and Caroline dealing with the corpses she left behind and the heretic vamps all of which are (relatively) more interesting storylines. Or at least involve more important characters


So for the sake of the story staying interesting (for a given value of interesting) and pertinent, all of the main characters kind of have to be Elena-level self-centred arseholes. Because focusing on the wedding - which is what decent people would do - would be boring and pointless (seriously I get you want these characters to ride off into the sunset but you could just kill them - much quicker).


I actually really liked Stefan’s humanity tour with Damon and think they could have done so much more with this. Ultimately, Damon has a lot of the “life” skills of an 19th century mortal - because he’s always had the woo-woo out of vampire powers since then. As Stefan points out, he’s never had to cook, never had to fill in paperwork or hold a job or get a loan or maintain a house - or even drive a car without vampiric reflexes. This could have been so much more here! Damon is unprepared for this life, work on that!


I also liked Stefan’s excellent point that COUPLES SPLIT UP! It’s such a vital point to make when considering he is throwing away his immortality - and then throwing in that he is giving up everything he wants for the sake of Elena’s dreams - with no nods to his own desires (or even acknowledging he has some). Honestly I gave major bonuses to this whole episode for this absolutely excellent scene


Worst moment of the episode for me was Caroline’s chain of logic that led to her turning off her humanity - including Stefan not showing his feelings for her (by her mother’s open coffin, rememeber).  No! Bad Caroline! Responsibility lady, a guy not making it clear he’s into you is not an excuse, defence or in any way dilution of culpability! What if he has, actually, not been that into you? Would it have been his fault then for not liking you?