The Last Man on Earth, Season One, Episode Twelve: Screw The Moon 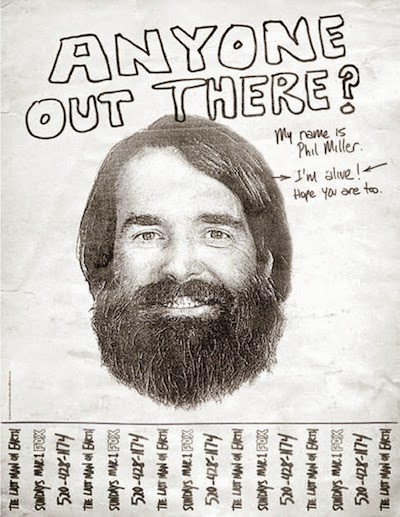 Tandy and Todd watch Phil work on getting them some electricity using solar power.  When Phil's back is turned, both Todd and Tandy talk smack about him.  When Tandy brings up killing Phil, the tone of the conversation between Todd and Tandy changes.  Tandy wants to drive Phil out to the desert and leave him there, causing Todd to realise that Tandy did that to him.  Tandy tries to argue that he couldn't do it but Todd is disgusted and leaves.  Tandy then loudly rants about how much he hates Phil which causes Phil to turn his head.

Tandy then heads to Carol's to show her the condom he took out of her garbage.  Carol happily admits to having sex with Phil, which upsets Tandy because he had to marry her to have sex with her. Carol however qualifies and says that they were trying to have baby, whereas; she is just having casual sex with Phil.  Tandy gets upsets because all he has ever wanted is casual sex, which leads Carol to inform Tandy that "the train has left the station."

Melissa knocks on Todd's door, concerned because she has not seen him all day. A depressed Todd answers the door covered in chip crumbs.  Melissa asks Todd if he wants to talk and he responds that what's going on with him right now isn't about them but adds that things are good.  Todd I suppose was really hurt to learn that Tandy wanted to kill him when he first arrived. Much to Melissa's surprise, Todd closes the door in her face.

Tandy returns home to find Phil packing up his things to move.  Tandy asks what the move is about and Phil admits to hearing Tandy say that he hated his guts.  Tandy comes clean and accuses Phil of trying to bring power to their area, so that the group will worship him. Phil suggests that this is about Carol but Tandy denies that and laughs in Phil's face.  Phil turns to leave and tells Tandy that it should about Carol because Carol is a special lady.  Of course, the immature Tandy fires back calling Phil a "special lady".

Tandy takes solace at his favourite bar.  He tells the balls that he doesn't recognize Carol anymore.  Carol is being free and has abandoned all of her rules.Tandy of course feels that he treated Carol well and she betraying him by having sex with Phil.  After a bit more of a rant, Tandy finally realises that he might have had a good thing going with Carol.

Tandy arrives at Carol to give her wildflowers he picked and jewels he took from a jewelery store.  Carol however is completely unimpressed so Tandy says that he wrote her a song.  Carol is doubtful and tells Tandy to stop because he only wants her because he cannot have her.  The conversation comes to a stop when Phil walks to the door calling Carol "care bear".

Later that night, the group is gathered for a big announcement.  Carol tells the group that Phil has something to share with them.  The group becomes excited about all of the things they can do with electricity.  Phil tells them that thus far, what he can do is limited and he plugs in a lamp. Everyone is amazed but Tandy, who responds like a spoiled child and knocks over the lamp.  Tandy denies that he knocked over the lamp and Phil demands that he pick up the lamp.  Tandy stands and tells Phil that he is making an ass out of himself and again denies knocking over the lamp.  Tandy asks Todd to back him up, but Todd says that he saw Tandy knock over the lamp and reveals Tandy's desire to kill Phil. Todd even tells the group about how Tandy thought about leaving Todd in the desert.  The group is rightfully disgusted at Tandy's actions.  Finally, Tandy admits to his bad acts and argues that while he might of thought about leaving Todd in the desert, he didn't do it.  Phil makes the announcement that Tandy is no longer welcome in Tuscon.  Tandy is distraught because Tuscon is home and where he grew up but no one in the group comes to his defense. Tandy responds by running home and barricading himself inside.


Carol is teaching Phil how to knit and when he calls her care bear, Carol asks him to find a new nickname for her.  Carol then reveals that she is worried about Tandy because he has been locked in his home without food for three days.  Carol asks what happens if Tandy dies but an unsympathetic Phil replies that then their problems will be solved. Phil suggests that Tandy will come out soon because he has no food.

Still barricaded in his home, Tandy is eating toilet paper.  When he comes across one of Carol's raisin balls, he has a moment of nostalgia but that comes to an end the moment he takes a bite.  Carol knocks on Tandy's door and he tells her that he is a good person and is Phil Miller and not Tandy.  Carol encourages him to come outside, saying that the group is around the campfire.  Tandy sadly says that no one wants him out there and Carol informs him that the group has decided that they want to call a truce.  Tandy declares that he is not a charity case and knows that Carol has found herself a new man.  Carol gives up and walks away.  Facing the possibility of eating toothpaste, Tandy decides to head outside, where he finds the group singing, "leaving on a jet plane."  They are all smiles except for Todd, who seems to be having trouble keeping his smile.  Tandy is suddenly tackled by Phil, who tells him that this is the last time he will be seeing any of them.

Tandy awakes to find himself on a flat bed truck.  When the truck stops, Phil drags Tandy to the ground and hands him two days worth of supplies.  Phil makes it clear that Tandy is not to return to Tuscon before driving off.  Tandy yells that he doesn't need him, or any of the group when Phil keeps driving.  Tandy looks over his supplies and says that if he rations them they can last two days.  Twenty minutes later, not only has Tandy eaten all of his supplies, he has finished all of the water.  Tandy starts walking.

Melissa knocks on Todd's door again and says that she is sorry and had know idea that Tandy tried to murder him.  Todd again tells Melissa that he loves her and is okay with her not saying it back.  Melissa responds in kind adding that she is thankful for his patience.  They have a moment where Todd smiles because of Melissa's confession of love and she denies actually saying, "I love you."  The two hug and kiss - problems resolved.

Tandy is passed out on the road when one of his ball friends rolls into his face.  When Tandy looks up, Carol is holding extra supplies saying that she knew two days would not be enough.  Carol then asks Tandy if he wrote her a song and asks to hear it.  Tandy starts to sing and Carol makes the decision to stick with Tandy because he needs her.  Carol says that she cannot be with a man who leaves someone in the desert to die and would rather be with the man who doesn't have the heart to go through with it. Carol suggests that she and Tandy belong together.

In the car they decide to start over and begin by re-introducing themselves. Phil reveals that he had a brother and Carol asks to learn more.  They don't get far before Carol asks Phil to put on his seatbelt.

In the space station, an astronaut tries to get in touch with Houston but gets no answer.  When the camera focuses on his uniform, it of course turns out that his last name is Miller.

Yeah, that's it for the first season of The Last Man on Earth. I want an award for watching all twelve episodes that Sparky in his cruelty foisted on me.

While Last Man on Earth was inclusive as far as POC are concerned, it had not LGBT characters in the first season and was filled with horrible tropes.  Carol largely functioned as a cock blocker. Melissa was the sex symbol and Todd played the role of the fat guy.  Todd started off to be a good character but quickly fell apart.  I really hated that they had Todd deal with stress by binge eating on chips.  Really?  Yep, fat people always turn to food when they are upset.

The ending makes me wonder if the writers decided to wrap everything up with Carol and Phil riding off into the sunset together because they didn't think that they would get a second season. Unfortunately, that was not to be the case because The Last Man on Earth has been renewed.  Carol and Phil clearly cannot go back to Tuscon with the other Phil still there.  It's clear that season two will essentially be a reboot of season one.  We already know that Phil is not the last man on earth as evidenced by the fact that people kept showing up.  The story lines for the other characters were pretty much wrapped up; however, I am surprised that there is a possibility that this show will leave January Jones behind.

I really cannot see this show going anywhere.  It's a dystopian comedy but I didn't find the majority of it funny.  Tandy's man-child routine got boring after the first episode to be frank.  I don't know that I would have left him out in the desert but despite his protestations, he is clearly a horrible human being.  For season two I expect more puerile humour and am happy to hand it off to Sparky.