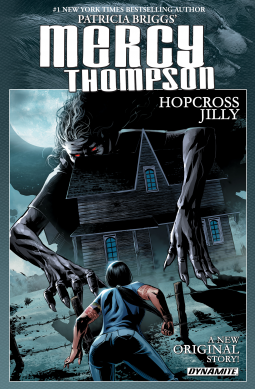 Mercy and the werewolf pack are doing their full moon roaming as animals when they come across a body. Of a child – and it’s just one of several
Bodies have been hidden for decades – and the killing has now started again. The mysterious fae have stopped working with humanity and are no longer leashing their worst monsters.
This is a graphic novel that functions, in many ways, like an excellent short story connected to the main series – which is exactly what I hoped it would be.
In many ways, I feel graphic novels and short stories are not exactly non-canon, but should be optional extras to a main plot line. I can’t, in all honesty, justify why I feel that essential canon-story development should not appear in short stories or graphic novels, but I do tend to see them as extras, little bits of non-compulsory fluffy
From that standpoint, this works ideally.
In the recent books in the Mercy Thompson series one of the major turning points of the meta-plot was the retreat of the fae back into their reservations after the injustice of the human justice system convinced them there was no point trying to assimilate or work with humanity any further. Of course, this doesn’t really closely affect Mercy and Adam that much, though they were deeply involved in the events that led to the fae withdrawing
We have had previous books which made it clear the fae had a lot of monsters among them as well – and this is another excellent example of that. When we look at the greater lore of fairy tales, we have a lot of terrifying monsters that hunted down “naughty” children (problem because they were originally created as various ways to keep children from disobeying authority figures). They are terrifying and creepy and horrifying – and, in some ways, the fae’s nukes
Now the fae have stopped playing nice with the humans, that also means no longer keeping their more unpalatable members hidden and restrained. No longer playing by human laws monsters like Hopcross Jilly are free to roam again. It both shows how monstrous the fae can be but also how much the fae were trying to play nice by humanity – I like the development of that, how it’s not just a matter of the fae spitefully unleashing their monsters, but also of them simply not working so hard to appeal to humanity.
The artwork of this comic really does suit the books, there were no characters who struck me as completely alien to how I imagined them from the novel series. It really worked to translate what I’ve always imagined to picture form – I really liked it and I’m generally not a huge fan of graphic novels, especially of books I’ve already read.
The fae was also incredibly creepy – they really managed to get the creepy feel, the alienness of the fae – as well as how it is restricted by its own mythology rather than being free to make her own choices. The fae exist within their own paradigm and it’s really well done.
What I also liked was the new insight into Jesse, Adam’s daughter. As the daughter of a werewolf she does face difficulties at school but we’ve never really seen any of this because we’ve seen this from Mercy’s point of view. I loved seeing her experiences and how she handles things. I’ve generally thought of Mercy as the protagonist to this – but really it’s Jesse who shines through as the best character (which I appreciated given this series’ past history). She was an excellent character
In terms of inclusion, Mercy is Native American, of course and isn’t white washed in the comics.  But she also really stands out as the only POC – which is really clear in a graphic novel. Even in groups scenes like Jesse’s school or when there’s a large number of police investigating a scene, we see a sea of pale faces. There are also no LGBT characters
I think this book is an excellent addition to the overall mythos of this world. It really does add more character and detail with its own good story and excellent atmosphere and theme which greatly adds to the overarching theme of this world and some of the major story elements within it. Definitely something fans of the series should read.