Signal to Noise by Silvia Moreno-Garcia 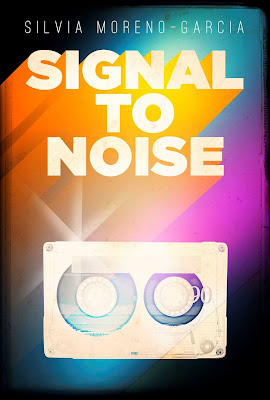 Mexico City, 1988, 15 year old Merche is an awkward outcast at school along with her best friends. Her passion, what keeps her going, is music; her all consuming obsession

And it is through these vinyl records that she discovers something greater – magic. And what can three outcast teens do with such powers? Fix their broken lives… or make others pay?

And in 2009 Merche comes home to confront so many of the shadows of her past and what happened when she was a teenager.

This review was exceedingly hard to write, I’ve restarted 3 or 4 times and I’m just going to have to plunge in and hope my thoughts land in something resembling order.

This is a book I have a lot of respect and admiration for. It portrays what it does with excellent depth, nuance and development. The characters are really excellent – fully fleshed out people with so much detail into their motives, their dreams, their lives. Everything they do is understandable and natural and real – they’re not just characters, they’re people.

Merche is our protagonist and she isn’t an easy character to like because she is so human. She’s not always likeable, she’s certainly not always fair. She’s aggressive and short tempered and she lashes out really excessively to any perceived attack. She manipulates people and quite often she treats her friends appallingly. She is very bad at seeing anything from any point of view but her own. But none of this is unnatural or not understandable – she’s an angry teenager who is not exactly leading her dream life and very sure of her own rightness. Yet we have an angry teenager, with all the jealousies, insecurities and desperate wishes of said angry teenager backed by the power of magic – and how terribly that can be abused

The same applies to all the characters, to a lesser degree because Merche’s confidence and leadership is what drives her so others are more likely to follow in her wake. But we can see all of the point of view characters (Merche, Sebastian, her father) doing things that we know are self-destructive, we know will not end well but at the same time I can see why they’d do them. We can see them do selfish, unwise and even outright terrible things but we know why they’re doing it – not because they’re bad or foolish or badly written, but because they are so very human. Everyone is humanised, even side characters we’re not supposed to like much (or people that Merche takes an intense dislike to) because they are people with motives and flaws.

Then there’s the romance – we have two excellently contrasting romances: the classic, overwhelming emotional infatuation of Sebastian and Merche for the respective, terrible love interests and the much more mature and deeper love that both of them learn later. I like this a lot because the classic teen romances they have are so common and tropey in the genre while, at the same time, such an obvious trainwreck

This is all topped off by the way the book is split – between adult Merche learning a little more about her father and reconnecting with Sebastian – and how much more she matures. This makes it ultimately a story about maturity, about growing and learning and accepting your mistakes from the past even while you are still affected by them

So I have a lot to praise about this book… but… I can’t say I enjoyed it, but a lot of that is for very personal taste reasons (yes, of course any review relies on that). For example, music is a major part of Merche’s life, it defines her experience, it’s the one constant in her every experience. It’s meaningful in a way that goes beyond a mere hobby or interest. While it’s an amazing element of her character, it’s also a barrier for me simply because most of her references I don’t get and most of the rest I care little about. It’s like being stuck on the bus next to someone who really wants to tell you about X when you really really don’t care – it tells you so much about the character, it’s amazing development – but that doesn’t mean I’m actually interested in hearing it

And I feel really shallow for saying it – but I prefer more woo-woo in my speculative fiction. There is magic here but it’s entirely incidental to the real story which is the intense character development, the very real lives these characters. This isn’t a story about magic – it’s about characters growing up, it’s about real love vs crushes and infatuations. It’s about intense emotion, anger and hatred, it’s about terrible decisions we make because we’re foolish and angry and have big dreams. It’s about growing up and learning and destroyed relationships…. It’s not about magic, it’s about so much more than that. It is so character driven that the world, setting and even genre is somewhat irrelevant. Which kind of leaves me a little outside as a genre fan.

Every character in this book is Latino or Latina, they’re all Mexican and the book is set in Mexico with a lot of excellent cultural references everywhere. This is set in Mexico City and it’s more than just a name – it’s not just “this generic city is Mexico City”, but we have culture, media and food references that permeate the whole book without it feeling clumsy or forced, it’s woven into the book as a natural part of it. It also touches on some issues relating to race and ethnicity – especially with beauty standards with those considered most attractive being fairer skinned and having pale eyes compared to the dark and swarthy Merche and Sebastian

There is a lot of hatred of other women from Merche – she uses and exploits Daniela and hates her mother and the popular pretty girl at school. But then, the whole point of the book is that Merche is not an infallible actor. She’s not fair, she’s not kind and she’s often not very nice – the insights we see of someone of the people we hate are clear that Merche isn’t actually all that fair or justified in her hate. She also has an excellent relationship with her grandmother who is indulgent, sensible and protective. There is also a depiction of sexual assault in the book – but the way it is covered is a reasoned part of the story and is treated with the gravity and caution it deserves

Daniela, one of Merche’s best friends, is disabled with Lupus. It doesn’t define her character, it isn’t close to the main point of this character but at the same time it does affect her, it affects what she can do and how people treat her (and how she wishes they weren’t). Even if she’s not looked at as often as Sebastian and Merche it’s still woven into her character

There is a lot of homophobia in this book – Sebastian is constantly attacked with homophobic slurs over and over – it’s gratuitous and unnecessary (there are more insults out there) and stands out in a book that has no LGBT characters (Sebastian is only ever presented as interested in women). The slurs and attacks are not challenged to say homophobia is wrong – it more has a sense that this is wrong because Sebastian is not gay. Homophobia isn’t wrong, homophobia is wrong when inflicted on a straight person

Did I enjoy this book? No. I didn’t because it’s not my thing, because it’s presence in our genre is incidental and I generally prefer action/plot driven books to character driven ones. But I am impressed by this book, immensely so. I am in awe of what it achieved, I can’t help by praise the writing, the depictions and the sheer realness of the characters. It was a deep, powerful book that deserves a high fang rating even if it wasn’t fun or what I was looking for.