Sleeping with the Fishes (Fred the Mermaid #1) by MaryJanice Davidson 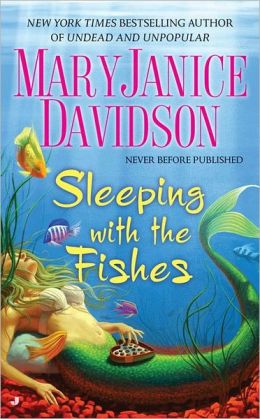 Dr. Fredrika Bimms knows that she's a mermaid and that her dad isn't her biological father.  When her parents decide to drop the news, that the man she calls dad isn't biologically related to her, Fred is more bothered by catching her parents in the middle of sex, than she is by their revelation.  Feeling scared for life, Fred wonders how she will get past seeing what no child ever wants to see.  Little does Fred know that she'll quickly get over the trauma when the handsome Prince Artur of the Black Sea appears, demanding her help as his royal subject to discover the source that is polluting the ocean.  Fast on Artur's heels, is the hot marine biologist Thomas, who has also noticed a problem with the water and the fact that Fred's hair is green and not blue. For the first time, Fred finds that she has the attention of two gorgeous men and doesn't know remotely how to handle it.

Sleeping with the Fishes is mindless fluff and never pretends to be anything else.  It can easily be read in one afternoon on the patio with a piña colada for company.  That said, even with few expectations, Sleeping with the Fishes is outright puerile and at times irritating.  There's really no plot to speak of.  For the majority of the book, Fred just stomps around angry and confused by the attentions of Thomas and Artur.  We learn about her penchant for striking out physically when irritated or feeling threatened.  At 5'11, Fred is incredibly strong thanks to being a human/mermaid hybrid.  She's stunningly beautiful, though naturally doesn't even acknowledge it.  Other than her grumpy disposition, she has no real characterisation to speak of.  It's impossible to like or dislike Fred because I know hardly anything about her.

In between Fred's grumping, we get the search for the person who's polluting the water.  This really could have gone somewhere and given Sleeping with the Fishes a real plot; however, Davidson really didn't invest in it at all.  The connection made between Fred and the polluter is tenuous at best and his reasons for polluting are absolutely ridiculous.  If that were not enough, Fred quickly puts two and two together to ascertain the antagonist's identity and the case is wrapped up with everyone headed their own directions.  I didn't expect the great American novel but what the hell?  The ending is so abrupt that it left me asking, "is this all?"

I assume that because the story is so light in terms of plot, Davidson tried to interject humour. Unfortunately, none of the humour is particularly amusing.  Fred is a mermaid, who has an allergy to seafood and gets seasick in a boat.  Yes, it's awkward but it is not enough to make me giggle Where Davidson really failed however is having Fred's Bff Jonas be confused as a gay for the sake of shits and giggles.  People naturally think that Jonas is gay because he likes shopping, can pick a good pair of shoes, takes care of his skin, cares about how he looks etc., and ets., I assume you get the picture.  It's all based on a stereotype of what a gay man is supposedly like. Jonas's sexuality is the brief stumbling block between him and the woman he has had a crush on for six years.

She looked puzzled, but raised and hardened her voice. "Now, Jonas, you listen to me." He got all tingly when she used her schoolteacher voice. "You are a wonderful guy: handsome, funny, smart, sweet. You're going to make some man very happy. The trick is finding Mr. Right, as they say."

"You've got a lot to offer some lucky fellow, and I'm sure the gentleman you've got a crush on will see that if you can just get to know him a little better."

"But—" In his surprise, he blurted out the truth. "But you're the gentleman I've got a crush on!"

They stared at: each other. Dr. Barb froze with her ginger ale halfway to her mouth. And Jonas cursed himself. This wasn't the first time a woman had assumed he was gay, but he never dreamed that Dr, Barb would think—Couldn't she tell he could hardly keep his hands—Couldn't she tell?"

"But you are.""Dr. Barb," he snapped, "I think I would know, okay? Trust me, I'm not even bi. I'm just very very very secure in my masculinity, okay?"

Color began to climb in her face. "But—you like to—"

"Secure in my masculinity."

Now she was red faced and stammering. "But I—I never s-see you w-with any girls—women, I mean—"

"You've never seen me with anybody."She closed her mouth so quickly, he heard the click of her teeth coming together. When she spoke, her voice was very small and she sort of breathed the whole thing out, really fast.

Haha, a straight man is being read as gay.  All is not lost because Jonas gets his lady love and makes sure she has no doubt about his sexuality.  Isn't it wonderful that Jonas is so secure in his masculinity that he can order a "girlie drink" as well?  I perhaps could have lived with this ridiculous trope had Davidson bothered to include an actual LGBT character, but that is not the case.  In fact,  there is only one mention of a GLBT person in Sleeping with the Fishes.

"Right. I'm in the same boat myself. My trainer ran off with my nutritionist."

"Tessa and Mari were lesbians?"

"Aw. Don't say blew." Fred's salad came, and she picked at it and tried not to flinch as Jonas tore through his lobster. (pg 28)

Okay, so no actual references to LGBT people except for these throw away characters, who never appear in Sleeping with the Fishes and a meterosexual man who people assume is gay. Yeah, I'm not impressed by this shallow attempt at inclusion.

I really wanted to like Sleeping with the Fishes.  I absolutely adore mermaids and am firm in the belief that in the right hands they could make interesting characters.  Unfortunately, that's not the case when it comes to Sleeping with the Fishes.  The book has nothing positive to offer if you're not a fan of grumpy protagonists, who don't know they're beautiful and love interests who are only into the protagonist because of their identity.  The plot is so thin that I hesitate to even use that word in reference to this book. What little tension exists is quickly resolved.  The hook to read the second book is all about the building love triangle between Fred, Artur and Thomas.  The problem is that I didn't invest in the characters to care who Fred picks at the end of the day.

Sleeping with the Fishes is mindless fluff - quickly read and forgotten.  However, I feel that Davidson owes her readers a little more.  Fluff is acceptable, but fluff without a plot, characterisation, or direction simply is not excusable.  Sleeping with the Fishes could have been so much more than the thin pamphlet masquerading as a book that it is but alas, it seems that was not meant to be.