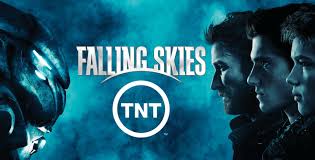 Time for the last season of Falling Skies, get your dice – it’s time for a random story generator (it’s not like this show tries to be coherent with its storytelling. At least the characters having absolutely no characterisation means they can do just about anything

And last season Tom found a new alien! Because all the aliens in the galaxy want to gather on Earth. The aliens greet Tom with talk of peace and his dead wife. A whole hallucination world of Earth being all good and none destroyed. How many times has Tom been in these dream worlds. His hallucination wife is talking about breast cancer as a not very subtle analogy for the Espheni. It’s all about him getting angry and “finding his warrior”. Then flooding him with water because he probably hasn’t bathed in a while.

On Earth Anne has taken over with Tom missing presumed ridiculously stupid (he’s gone on another alien spaceship! He has a habit of that).  She has a speech for the crowd telling them all that Tom and Lexi are dead (yay – oh wait, that’s the bad news). But the Espheni did lose their power core and a whole load of their ships left Earth for reasons unknown. She’s sure this means they’re winning (Pope speaks up in support since he flipped his character coin and he’s a good guy today). There’s a brief nod that Lexi was terribad evil but she’s dead now so we don’t have to care any more.

Weaver has his people shore up their defences though Hal wants to go on the offensive.

Alas, Tom isn’t dead and drags himself to the shore. Lexi is still dead because the half-alien magic child is just too ridiculous to continue when you’ve got a whole new load of ridiculousness to bring on. He kills a skitter with an improvised weapon as proof he has “found his warrior”. He has a moment of being all kind of shocked that he did this despite the fact that killing Skitters has been what they’ve been doing since the first season. He returns to camp where he runs into Pope – and Pope rambles on but tom won’t even speak to him

Instead he goes to shock Anne who is sleeping. After a reunion Anne does a health check on him and asks how he got home. He doesn’t tell her instead randomly objecting to her necklace and telling them about his weird memory hallucination and how it was a good thing and how the memory invaders totally knew him really well. Anne decides he’s just hallucinating and it’s totally not due to alien mind control (it’s not like that hasn’t happened before, right?)

Tom tells the whole crowd how it’s all good even if it is just a little freaky (hey let’s acknowledge that it’s freaky because then we don’t actually have to do anything about it) – oh and Lexi’s dead – and this is why they all need to be super angry because they’re just all not mad enough and he brandishes a skitter head at everyone because showing dead corpse parts is inspirational. Weaver looks Troubled.

Battle planning between Weaver Tom and Cochise and Weaver wants to hit their machines before they get power back but the Volm are still all limited for REASONS. He can spy though and tell them of some local mechs and beamers around them. Tom wants to surge out like a berserker while Weaver wants to be more cautious. But Chochise casually drops in if they handle their area, other human militias around the world will handle their areas

Yes, there are numerous small armies of humans all around the world that the Volm have been in contact with who they never mentioned before because REASONS. Oh this show, this terrible terrible show. 317 of them, all disorganised who need one special leader (one of them even based in Tucson). They also discuss how there are 500 Overlords worldwide – and many of them may have died when the power went down (I think – this important conversation is a vague talking scene before the MUSH MORE IMPORTANT debate on whether Matt gets to go to battle – what was there a time when they weren’t taking kids to battle?). Of course Tom agrees and Anne is shocked and appalled despite, y’know kiddy combat being standard.

Ben, Hal and Maggie continue their awkward love triangle because we really need this awful plot line to keep going.

Out in the field Hal & co spot some Skitters without an Overlord which apparently makes them chaotic and… animalistic? Even cannibalistic? Y’know these creatures who, several seasons ago, were intelligent beings running their own rebellion? Does anyone remember this? Does anyone care? Are old scripts just turned into paper planes and thrown out the window by writers making zoomy noises?

Weaver’s team faces off against mechs without enough power to actually fight.

Tom’s team, however, is attacked by Skitters (and Anne has developed 8 levels of badass even while talking pleasantly to the skitters she kills to let them die) but they’re saved with Tex taking the awesome shot and saving them.

Anne explains her getting cosy with the Skitter by saying she doesn’t want to get “lost in rage.” Have we got the themes of the season suitably established yet?

Because the skitters set a trap for Tom that means there most be an Overlord nearby because Skitters (who did most of the fighting for two seasons, who organised their own rebellion) are incapable of planning without an Overlord close by (that would be one of those 500 on the entire planet who always has to be close whenever Skitters act. Apparently. More zoomy noises from the writers). Cochise tries to convince Tom that he needs to let people rest but no, because Rage! War!

And update- not only do skitters need an Overlord nearby but he has to be within 5 miles! (Old scripts are now being used as toilet paper, never mind airplanes). Also Tom is now making battle plans based on the hunches from his hallucination dream and insists everyone agrees with this. Sure Anne and others are concerned but he just runs over them – how can they reasonably ignore his hallucinations! They’re important, damn it!

In the midst of all the fighting and dying, Tom is left alone (he was surrounded 10 seconds ago) to hallucinate and be led to the Overlord – only to find him connected to Ben to communicate. Tom shoots the Overlord in the head – not caring much about Ben’s headache. I’m pretty sure in previous seasons “a minor headache” was not the consequence of killing someone when they were connected to a harnessed kid – I’m sure we’ve seen Ben beaten and bruised and Denny nearly die from that. Let’s take another moment to pity the poor, abused cannon.

At Denny’s funeral, Tom gets bitten by a fly. This is significant. Apparently.

This show isn’t even trying any more. Lexi was a completely terrible storyline that made no sense, so they just drop her and the whole woo-woo powers has just disappeared and no-one’s even going to consider it.

Tom gets home and he is acting strangely – well no-one is going to be suspicious of this man who was with the mind control aliens! Why should they be?! It’s not like he has been mind controlled before? Or they had a whole season of mind controlled shenanigans?! Oh common sense you don’t belong on this show!

Of course, Tom acting strangely is probably missed because he ALWAYS DOES. He has constantly made random decision that made no sense (like getting on an alien space ship) simply because that is how the plot moves on this show. There’s no development or progression – plot lines advance because of unbelievable character decisions and/or random unexplained world stuff. Like, say, there been lots of human militias they just DIDN’T MENTION BEFORE! Or suddenly mindless skitters! Or Overlords needing to be within 5 miles despite us only seeing, what, 4 in the entire series? HOW DID THE EVEN CONQUER THE US LIKE THIS!? Their generals have to be within 5 miles of all their troops or their troops literally EAT each other. This all came from NOWHERE and it’s not just dubious revelations, the previous seasons literally would not work if these retcons were true.

And Tom’s hallucinations? How much of a dictator has he become that he can force this through? “we’re going there because hallucination possibly implanted by aliens” and he can’t just be overruled? In fact, he just says “this is where we’re going” and LEAVES THE ROOM? That’s not just him having ridiculous power but him also having zero respect for anyone in that room – they’re all expected to just go along with his hallucination dream.

Tom was actually better when he was second in command (though still terrible) at least then he had to pretend to convince people then.

This show has been getting steadily more terrible. This season doesn’t look like it’s going to change the pattern. I’m actually impressed – in one episode they’ve hacked more plot holes into their show than most can manage in an entire season.

Email ThisBlogThis!Share to TwitterShare to FacebookShare to Pinterest
Labels: 1 Fang, aliens, dystopian, falling skies, new season, sci-fi, tnt, what did I just watch, what the fuck is this?
Newer Post Older Post Home