Mortal Sins (World of the Lupi #5) by Eileen Wilks 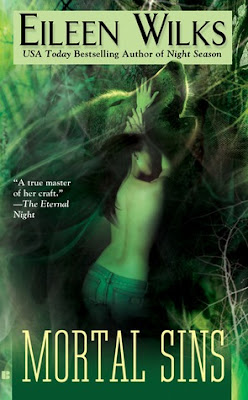 Lily Yu and her mate, Rule Turner are completing the legal procedure to get Rule full custody of his son. It’d be nice if the could do it interrupted- but the looming politics of the press attention for the “lupi prince” and the complication of Rule now carrying the magical Mantle of the Leidolf clan despite them being his ancestral enemies

Then people start dying – and in the post-Turning world with wild magic and long gone creatures now emerging, this is far from a simple murder. And unsimple murders are now Lily’s job as an FBI Agent for the Magical Crime’s unit. Mystical serial killers have to take precedence to even the most important of family dramas

This book was a blessed relief to me. In the last 3 book reviews I have been immensely frustrated by how this series has expanded immensely quickly without nearly enough time to develop it. We started jumping dimensions, suddenly there were more supernatural creatures than we could shake a stick at and I have no idea what was happening and why. I love a big rich world, I really do – but this was too much too soon. It was like sitting down to an epic 4 course meal full of all your favourite food – them having someone dump all of it on one plate an expect you to eat it all at once.

So this book, while not removing what has come before, focuses much more closely. The dragons are out there, the huge magical take down of technology is still happening, the increase in magic and the gifted is all still there – but it’s a background to a story which is more local and lets us digest the world a bit more, what has changed and what these characters are without them disappearing to Hell or Edge or dealing with dragons or elves or demons or any other deluge of creatures.

We still have the mystery and a world changing – the Turning has still brought new magical beings and challenges and Lily’s entire job has vastly expanded to be part of the new FBI task force dealing with all the random magical chaos. But it’s much more digestible. For the first time in 3 books I feel I can catch my breath absorb this world without it pulling the rug out from under my feet and hitting me with some other massive world building overhaul.

I also have to say how much I lie how little of this world is known – characters are very willing to say “I don’t know”, which I like. We don’t know every aspect of our world – and their world has changed so much, how could everyone know how things are? Too often fictional worlds present everything as known and certain – rather than unknown and theorised

There’s also a return to my preferred protagonist – Lily and Rule as opposed to Cynna and Cullen. Lily, being a detective is much more focused and practical and just a lot more fun to me.

The story is a murder mystery, with Lily & co having to do some investigating and a lot of research in the face of the new possibilities that magic has brought. I love the contrast between sensible research and detective work and the wider world they have to work in that brings in so many more unknowns. Without needing to do all the recapping that clogged the last book it was also much better paced and I finished the book surprisingly quickly because of it.

And I like Lily, she is so practical in the face of the woo-woo. Brave without being reckless, intelligent and skilled without super-woo-woo. She’s sensible. She doesn’t take shit from people, but doesn’t pick fights and act hyper-aggressive as a way to “stand up for herself” as we often see. She’s confident and assured without being raging and out of control. She also has some nice personal conflicts with family, her relationship to Rule’s son and her uncomfortable reaction to and relationship with spirituality due to her family history (which was a nice additional bit of development). I like her a lot and always have. She’s just… so practical in a woo-woo setting.

I like how we have the depiction of how she works with the local police forces. We often see this battle played out – but it was nice to see that despite objections, despite battles and personality clashes, ultimately most people were sensible and we didn’t get almost comic infighting which is so sadly common. There were no caricatures – even people who opposed Lily because of her age or race or gender were not caricatures of awful – they were people with prejudiced views that were terrible and needed correcting (which Lily did, awesomely and firmly) without being over the top caricatures of awful. I appreciate that – because it is so easy to demonise the prejudiced to the point where they only resemble the most extreme of people – but most prejudice we face isn’t like that. Most of it is the every day microaggressions and “normal” people with terrible views and behaviours.

Rule brought all the personal conflict and it worked well with the main storyline – both linking with it and making a nice point that their lives go on even when dramatic things are happening. I like that especially as it teaches Lily the importance of delegation – because she does get to have a life as well.

And I like Rule’s story with his son, the custody battle as well as the continuing drama between him and the Liedolf clan (historical enemies of his clan that he now finds himself ruling). I like how, again, the enemies are not clearcut terribad wrong – they’re just another clan of people that has been in opposition to Rule’s own (this applies to most of the characters in this book except, perhaps, for the unfortunate example of the mother of his son who is pretty over the top awful – but even she has an excellent redemption moment). There’s a lot of really good interactions between Rule, Lily and Rule’s son Toby. I want to applaud their parenting skills because they’re pretty damn awesome. And through them we get to see a lot of Lupi culture which is really rich and involved.

Inclusionwise we have a large number of POC – Lily is Asian. I’ve also lavished lots of praise on Lily as a great female, character, I also love Toby’s grandmother, Louise who is excellent in may ways. Strong without being powerful, confident, caring – not always right but always sincere and trying. I like her a lot.

In addition to the protagonist, there are a lot of POC side characters – from the werewolf clans with Black and Native American characters, to the local police force with a Black sheriff (and an acknowledgement of the prejudice he must have overcome to reach his position) and one of the characters facing the ghostly evil is also Black. It makes a point of having not just one POC in a prominent role in a sea of white people, there are other POC at every stage. There is a portrayal of and equally a challenge and call out of prejudice (such as when Lily is dismissed as a “mysterious oriental”) and a lot of good and bad and nuance in the depiction. There are some dubious elements – like the Black character being described as having skin the colour of wet tea leaves (what is this? I actually made a cup just to check what colour this is – I mean is there a more convoluted description out there?) The Black character is also the one who is most overly called out for his “anti-lupi” prejudice – but he does hit back at the idea of him being called bigoted against a supernatural race when he has faced real prejudice.

There are no LGBT characters in this story – or the series – but there is some really terrible appropriation, with Lily claiming to know she knows what it is like to be gay and in the closet because she has now “come out” as magically gifted. This isn’t even just appropriation by using the term “coming out” she openly uses “how a gay person felt, coming out the closet.” This is gross appropriation in any book, but in a book which this many characters and complete erasure of LGBT people it’s doubly intolerable. Stop, stop now – if you can’t be bother to acknowledge LGBT people then don’t steal our issues and lives for story fodder.

There are no disabled characters – but a reference to a non-present character as “handicapped” which is also sadly lacking.

I also dislike some of the underlying issues of the world setting. There is no reason for all Lupi to be inherently male and straight – it’s annoying that this is made a universe wide constant and it’s unjustified and unexplained. I also dislike that we’ve established the Lupi as culturally polygamous yet the minute our special main characters fall in love it all falls away and these men who are brought up to disapprove of jealousy now become jealous.

My criticisms aside, I really do love this book.
This book left me smiling because it’s what I hoped the series would be when I read the first book and I thought we had derailed from. I love the characters and the world – I really love Lily and her growing family, I like the complexities of her developing relationship with Toby. I love the greater development of the Lupi clan system. I love the slower absorption of this incredibly vast and changing world system. I love that there’s a real effort to make all the characters, even minor and antagonistic characters are fleshed out to make them human and with actual motives and characterisation. I like the relationships and the human characterisation – this has definitely secured its place as one of my must read series.