Mortal Danger (World of the Lupi #2) by Eileen Wilks 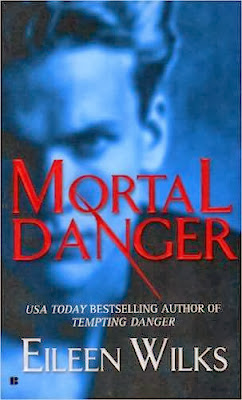 Lily Yu has had a lot of changes in her life – the mate bond with Rule, a change of job, heading for the FBI. She’s beginning to get a handle on things – but Harlowe, former associate of Helen and servant of the Big Bad is still out there, hatching plans with his mistress for Lily and her very rare and very precious Sensitive Gift.

Bodies start turning up with Harlowe’s signature on them pulling Lily on the trail as her FBI branch is consumed with other disasters: but Harlowe’s attacks hit closer to home and pull her into a world of literally demonic schemes.

There’s a lot about this series I love – and they’re continued in this book.

I like the world – the demons explored in this book are fascinatingly different . As are the different kinds of magic, the Lupi clans, gods, goddesses and even dragons – all woven together to create an excellently coherent whole. I also like how this wonderful world has room for uncertainty – too much world building in Urban Fantasy has the Truth that is Known. But reality doesn’t work that way. We have theories we know are right, theories we’re pretty sure are right, theories that are, well, an educated guess at best. I like that uncertainty in world building, that sense that people ARE trying to understand but just don’t know the answer yet.

So I was kind of disappointed when this book became rather… flabby. There’s a lot of recap, a lot of over-explanation, a lot of over-description and there are times in the book, especially with the dimension hopping, where the book becomes outright difficult to read and follow. The book is pretty slow, fairly bogged down and just doesn’t flow with particularly exciting pacing.

There’s also a lot of ancillary things going along the book – like Lily and Rule’s relationship issues burning away. They’re interesting issues and definitely worth exploring but the rest of the book is moving so slowly that it feels like a distraction and I kind of want to ask why we’re spending so much time on that when they did very little in the way of actual investigating considering the severity of what they were dealing with. In fact, if the kidnapping hadn’t happened, I think Lily and Rule would still be reading eye-witness accounts in between rumbling over whether Lily can protect herself. There was also Rule summoning of the other clans – which was a wonderful piece of world building that was info-dumped on us with all the elegance of a dumpster truck. But what struck me most is the meeting split up without anyone coming to a conclusion – but the there was no real stated aim either. I still don’t exactly know why all these important werewolf personages were summoned and why Lily couldn’t be told about it.

It’s a shame that the excellent protagonist, the wonderful world that has been written and even an intriguing story is kind of let down by rather clumsy writing that needed tidying up considerably to make the story flow in a more coherent – and concise – manner.

There were no GBLT characters  - but there were some discomforting moments, to say the least. Firstly, I’m leery in the extreme at the idea of these goddess-chosen people who are expressly incapable of being anything but heterosexual; why is this necessary? Why MUST the Lupus be straight men? What does this add to the world, the plot or anything?

We also had a character who is apparently repeatedly mistaken for a lesbian because of her tattoos. I just wonder at the need for these homophobic stereotyping and the need to emphasise the oh-so-very-straightness of the Lupi in a book that has no GBLT characters? If you’re going to erase GBLT people, I don’t like it – but at least erase the stereotyping and don’t twist yourself in knots to ensure that your super-hot-wolf-men could never ever possibly, ever be gay, oh no!

The demons can change their sex at will and are often hermaphroditic – but that’s an inherent aspect of their species and hardly representation. Which is good – because if I DID consider them representative, we have evil, sex obsessed, sex organ obsessed demons with the good, holy warriors who are so very very very straight.

Lily continues to be an excellent protagonist – and an Asian protagonist which is rare, especially so largely devoid of stereotypes (we did learn she studies martial arts this book – but then, how many kick arse Urban Fantasy protagonists study martial arts?)… her family? Less so, with the mystical grandmother to the domineering mother demanding she settle down with a nice Chinese boy, they’re less ideal.

We have some other background POC, including several gang members but also some of the heads of werewolf clans. But I wonder if that’s meant to emphasise they’re foreign. That being said, many members of the Nikolai clan are also Native American including Benedict and Nikki.  There really are rather a large number of POC in this book. I’m curious why Cynna, with symbols and magic from a predominantly Black gang, is White.  We also have some really nasty appropriation comparing racist slurs to assumptions about the Lupi. On appropriation – can we not have Hitler manipulated by demons please? It’s a bad habit in urban fantasy and belittles his crimes.

We do have a number of strong, capable women –Lily, Cynna and Lily’s grandmother; and Lily does spend a large amount of the book challenging how “over-protective” her family is and Rule is. She’s not delicate, she doesn’t need saving. She does need help sometimes and she’s not adverse to guards, but she is adamantly against being guarded against her will or Rule making that decision for her. I like that she emphasises this – she isn’t making foolish decisions, she isn’t being silly with her safety, she isn’t being reckless or a fool. She is reasonable – and she demands her reasonableness be respected with the courtesy of actually being consulted about her own life.

I like this book, and I want to love it. But there are elements that I don’t lime – the appropriation for one – and I can’t get behind the writing. It’s all clumsy and splurged and makes what could be a fascinating story, excellent world and some really good characters just a little too hard to read.