Dracula, Season One, Episode One: The Blood Is the Life 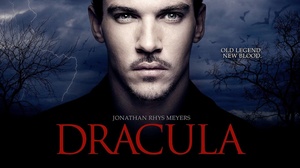 In Romania in 1881, two men break into an underground crypt.  One quickly breaks open the sarcophagus and finds bars of gold.  While he is getting excited about being rich, the other slits his throat allowing the blood to drip over the sarcophagus.  The blood drips down beneath the sarcophagus and onto a skeleton, which slowly comes alive.  The skeleton completely transforms into Dracula.

Grayson is throwing a ball and Johnathon Harker arrives with Mina Murray and Lucy Westenra  on his arm. Harker comments that the glass he is holding is worth more than he makes in a week and Lucy corrects him and says more than he makes in a month. Harker promises Lucy that he is her guest tonight and not a journalist.  The gossip begins about who Grayson is and what he is all about, as the couples dance. Renfield makes an appearance and introduces Grayson as the master of Carfax manor - Mr. Grayson.

Grayson makes his entrance and when he sees Mina he gets a flashback in time of him in bed with his wife.  It seems that Mina looks exactly like his long lost dead love. Mina is very effected by Grayson's stare and tells Harker that it was like someone walking over her grave.  After his toast, Grayson tells Renfield that he wants to know everything about Mina and the man she is with. Grayson begins to circulate and meets Lady Jayne and her companion for the night. Grayson then meets Clive Dawson and his wife Lady Hope, Lord Laurent, and Lord Davenport.  Grayson then brings up the subject of British Imperial and says that they hold patents in cooling, which would be most useful in advancing one his technological projects.  Grayson says that he would very much like to acquire those patents and is informed by Clive Dawson that they are not in the business of selling to interloping colonials.

Harker approaches and tells Grayson that Dawson is a terrible gambler.  When Mina joins them, Harker introduces himself and Mina to Grayson. Mina says that it's like she and Grayson have met before.  Renfield interrupts Grayson and tells him that it is time. Grayon excuses himself and asks who Harker is. Renfield informs him that Harker is a reporter for the Inquisitor and that Harker is resourceful and very ambitious. Renfield then says that Mina is a medical student.

Renfield calls for the attention of the crowd and then reminds Harker that the invitation expressly forbade the press and offers Harker the opportunity to come by tomorrow afternoon for an interview. Grayson then has servants hand out light bulbs to the assembled guests.  Greyson says that he is going to give them an example of power drawn from the magnetosphere. Renfield speaks in the phone and gives an order of now.  In some sort of factory workers begin to struggle as guests wonder what this will do the petroleum market. When nothing happens, Greyson calls for more power and the worker amplify their efforts.  Suddenly the light bulbs begin to lighten until each person is holding a lighted bulb. The lab starts to experience technical difficulties but Greyson tells Renfield to hang on a few more seconds.  When the coolant evaporates they shut down and the light bulbs in the ballroom blink out.  Greyson thanks the audience for their patience.

Greyson makes his way back to Mina and Lucy commenting that Mina looks a little bit shaken.  Mina admits that she is not sure what she has just witnessed. Greyson says that it's the beginning of a new era and excuses himself.  Harker comments that Greyson seemed quite taken with Mina but she replie that Greyson was just being polite.

Greyson moves outside where Lady Jane approaches.  Lady Jane comments that his performance was operatic.  Greyson takes it as a compliment saying that he is a fan.  Lady Jane invites him to watch a performance in her box.

At the end of the night the guests are leaving and Dawson tells Grayon that he has not fooled anyone with his absurd stunt.  Dawson calls Greyson a fraud and promises that he will never do business there.


Back in his room, Harker is hard at work at the typewriter. Szabo asks Harker when he is going to ask Mina when to marry him and points out that Mina will not wait forever.

In another room, Lucy and Mina are talking about Greyson and Lucy points out that Greyson was leering at Mina. Lucy adds that at least Greyson is not boring and Mina asks if they can talk about something other than how boring Lucy finds Harker.

In his room, Harker tells Szabo that he believes Mina can do better than him.  Suddenly they hear a noise. In their room, the girl also hear a noise. Both Mina and Lucy look out the window but neither of them see anything.

A drunk Dawson has returned home and when he puts his key in the lock, Dawson is attacked from behind.

The next afternoon, at Carfax manor, Greyson burns a picture of Dawson calling a pig who insulted him in his own home. Greyson has pictures of the people who attended his party lined up on the floor and being to rant about the Order of the Dragon. Greyson holds up a picture of Laurent and calls him a preening little peacock.  Greyson tells Renfield to put Davenport and Laurent on the short list for the high council. Renfield asks who Greyson thinks is the leader and Greyson replies that it could be anyone. Greyson adds that in the past the Order of the Dragons branded men and women as heretics and burned people alive but today they use the boardroom.  Greyson says that they will not control the next century because of Geomagnetic energy.

A man breaks into a funeral parlor and breaks open Dawson's casket. He opens Dawson's shirt and examines the wound on his neck before slicing of Dawson's head and leaving with it in a bag. He then delivers it to Lady Jane, who takes into the basement of a military outfitters. Lady Jane opens the bag and discovers the head stuffed with cream and an olive.  Her partner questions how long it's been since they have had to deal with a vampire. It turns out that Jack the Ripper was a cover for vampire killings.  Lady Jane suggests that Clive was targeted by their enemies and suggests keeping an eye on the high council's houses. They decide to claim that Clive was killed by a dog.

Mina is attending a lecture on the structure of the neuron. The professor is Van Hesling and he instructs Campbell who was reading the newspaper that Graysons new technology while relevant, should be discussed outside of class.

Harker has arrived for his interview, and Renfield tells hims that Grayson will be right with him.  The room is dark, so Harker opens a shutter letting the sun in. Greyson enters the room but hesitates to shake Harker's hand because Harker is standing in direct sunlight. When they shake, Grayson's hand begins to sizzle.  They each take a seat with Grayson ensuring that his chair is out of the light. Grayson reveals that Harker was invited because he stand against the same vested interests who want to see him return to the United States. Grayson says that this is a homecoming because it is the country of his great grandparents birth but Harker suggests it might have something to do with Edison running him out of the country.  Grayon moves on to talk about the fact that they are on a precipice of a great change and have the ability to redefine themselves as a species.

Mina heads to see Van Hesling about the final examination.  Van Hesling tells her that she has always scored the highest but her surgical technique leaves much to be desired. Lucy says that the moment the scalpel pierce the epidermis her hands begin to tremble no matter what she does.  Van Hesling says that she must believe in herself and that the heart never lies.

Mina is standing outside her school and what she does not know is that Grayson is watching her. She is met by a friend and walks away to safety. Grayson then drinks a woman's blood up against a wall, as she moans loudly.

That night at the opera, Harker arrives with Mina on his arm.  It seems that Grayson loaned Harker his box for the night and Harker believes it is because Grayson wants him to write a nice article.  Mina points out that Grayon is wealthy and handsome but will never have her because she belongs to Harker. Lady Jane makes her grand entrance and sits alone in her box.  Lady Jane is joined by Grayson who tells her that the view will be better if she sits further back.  It's not long before the too engage in some sex play but the whole time, Grayson has eyes only for Mina, who is sitting with Harker.

Laurent and Davenport are in a carriage and Laruent tells Davenport that Grayson bought Dawson shares from his widows.  Apparently Mrs. Dawson was forced to sell to settle Clive's gambling debts and to save herself from public ruin. Laurent calls the whole thing loathsome but Davenport suggests that it was well played. Laurent says that this makes Grayson his business partner but Davenport reminds him that Grayson only has a seat on the board and does not have controlling power.

Grayson is up on a roof when Kruger shoots him with an arrow.  Grayson quickly pulls out the arrow, grabs his sword and attacks. Kruger pulls out a cruxifix but it doesn't seem to have much effect and quickly loses the battle to Grayson.  Grayson tells him that he will destroy his order and Kruger realises that Greyson is Dracula.

That was one hell of a series premier.  I do think that it moved a little quickly and probably would have been better served if it had been an hour and a half rather than one hour.  That said, it was absolutely beautiful to watch (yes, I'm a sucker for Victoriana).

This version of Dracula is not faithful to the books.  I know that there are some who are upset to see Van Hesling in partnership with Dracula rather than is arch enemy but I am not bothered by it because the change will keep us guessing as to what is coming up.  When you make a series based on a book as popular as this one, changes keep the audiences interested.  I personally believe that there is enough of the original to feel familiar.

The casting was absolutely perfect.  Could they have picked a better Dracula than Jonathan Rhys Meyers?  I know that there were some complaints about Meyers horrendous American accent.  It sounded horribly southern and fake but I feel that was covered by the fact that he was pretending to be American.

At any rate, as you may have guessed, I am hooked!  I cannot wait to see how this series plays out and it is easily the best premiere of a new show that I have seen thus far this season.