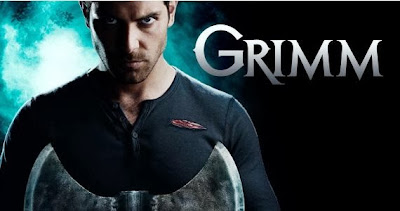 “But if I stand at the sick person’s feet, he is mine.”

We left off with a whole lot happening last season – with Renard’s evil brother and Baron Samedi preparing their own zombie apocalypse and kidnapping Nick.

And we start “15 minutes ago”, with something of a recap of the major events of last season’s finale. Evil Brother Eric Renard drives off, watched by good brother Captain Sean Renard. At the container storage Monroe and Rosalee hurry Juliette into their car while being chased by hordes of zombies (Juliette being more focused on the missing Nick).  They drive off surrounded by hordes of zombies while Nick pursues Baron Samedi across the tops of the containers.

To 5 minutes ago, with Monroe & co driving recklessly to lose as many of the zombies as possible - and Eric arrives at the container park, Nick finds the fake documents with his picture and gets gooed by Baron Samedi. Renard arrives to spy on Eric, he follows him to the container where he pauses to gloat over Nick’s comatose body.

Monroe, dodging zombies, gets the car stuck on a barricade, forcing them to leave the car and climb up the containers for safety. Sean Renard moves through the containers and sees Samedi loading up a box (Nick’s body)  but is attacked by zombies – at the same time as the zombies moving up to Monroe, Juliette and Rosalie. Lots of zombie fighting and no-one has a shotgun!

To more peaceful climes – Hank, now walking again, and Wu comment on how quiet everything is; before Juliette calls Hank asking for help while fending off zombies. And he was just about to catch up on his paperwork, how inconsiderate! Hank gets Wu to call out the cavalry to the container yard. And Monroe really needs to start ripping off limbs. They’ve really depowered him since the first season.

As the police arrive both Renard and Monroe woge to help fight off their attackers. Hank orders the riot police to round up as many as they can and lock them in a container until they can get an antidote to them. He calls Renard and they both quickly fill each other in. While the police fight the zombies, Renard loads up Hank, Juliette, Rosaelie and Monroe and they hurry to the airport to save Nick. Renard tells everyone else about the plan to get nick out of the country and how all the chaos has been a distraction – and Rosalie adds that Nick, as a Grimm, may not react the same way to the toxin.

Hank calls ahead to have police ground the plane – which gets them all gooed. Renard, Juliette et al arrive to see the police unconscious – and the plane already taking off. Juliette slaps Renard which seems rather unfair. She blames his family (ok, that’s fair but it’s not like he has influence over them) and demands he bring Nick back. Renard will track their flight plan, in the meantime they’ve got a whole load of zombies to cure

Midflight, Nick starts banging in his box which Samedi finds rather curious but not alarming. Then nick starts denting the metal box he’s in. You can see clear imprints of his fists. Angry Grimm is very very angry. He bursts out – and Samedi goos him again. This sends him asleep. For 5 seconds. Then Angry Zombie Grimm attacks with new improved super-strength and the ability to throw Samedi the full length of the plain. Nick also does NOT look good – which is rather impressive given how good looking Nick is. Nick goes on an unstoppable rampage with Samedi and the 2 pilots in his path.

The plane begins to crash as Samedi yells at Nick to obey his master and Nick hits him in the face. They crash into the woods.

Back to Rosalie, Juliette and Monroe who are mass producing cure – but Juliette and Rosalie worry that they won’t be able to get the cure to everyone in time and people will die. Monroe wants to head to Austria to save Nick – especially since he’s not Renard’s biggest fan, since he’s royal as well. Rosalie is more sensible, the Royal family is too powerful for the three of them to just charge in and attack. Monroe has the idea of gathering all the people Nick has helped to help get him back. Meanwhile Juliette and Rosalie put their combined medical knowledge together to have the cure be delivered as a gas that all the zombies can inhale together.

Renard has his own plans – he calls his contact in Eric’s household and tells him that since Eric has gone so far, it’s time to get Miesner involved, this is apparently a big, serious deal by the way his mole reacts but Renard is clear – Eric started it, so he gets to pay the consequences.  The call ends and Hank enters Renard’s office revealing that the plane is going straight to Vienna and they can’t stop it. Renard assures Hank he will handle it, it’s between him and his brother. Hank’s not ok with Renard turning Nick’s abduction into a family feud – Nick needs help.

At the container yard, Wu and the police have managed to round up the rest of the zombies into a container in time for Juliette, Rosalie and Monroe to arrive with their cure. They throw in the bottles and wait for the gas to take effect. The open the container and everyone is fine – the cure worked. And Hank calls to let them all know the plane crashed.

They hurry to the location – and Nick finds civilisation and still isn’t in a reasonable frame of mind. Hank and Renard find the plane crash and the dead Baron Samedi (and wounded pilots). They also find Nick’s coffin – and the damage he managed to do from the inside.

Nick enters the bar he found and smacks down some poor fool who tries to pick a fight. The bar man hurriedly calls 911 as Nick begins ploughing through his customers.

Juliette, Monroe and Rosalie join Hank and Renard at the plane crash in time for Hank to be told about the 911 call and Nick taking on all comers in the bar. By the time they arrive, everyone has left, is unconscious or dead – just the barman fleeing to tell them of the guy inside. Monroe and Rosalie both smell Nick – but Rosalie says there’s something different in his scent.

They go into the bar filled with wounded. Monroe tracks his scent to where he left via the backdoor. And Nick finds a home with a family in it

Time for a break over to Austria and Adalind’s quest to get her powers back in exchange for her royal baby. Last time we were with them, Frau Pech just got herself well and truly outsmarted; and we now join Stefania removing Pech’s still beating heart and putting it in a pretty box and sealing it with blood.

She calls Adalind while lamenting the fate of the rug, for the next stage of the ritual. Cutting off Frau Pech’s hands, feet and eyes. Messy. She really should have invested in some plastic sheeting. Next is a walk in the woods and Adalind doesn’t even get to clean up – because there’s no point. More gore to follow!

They go out into the woods and a beautiful clearing full of flowers – poppies I think – to find the special spot where Adalind must dig with her bony claw hammer. Adalind finds all the tests tiresome but it’s not Stefania doing the testing.

Adalind buries the body parts and the heart in a box with her hands (getting steadily more stroppy) and stands. Darkness spreads from the put she dug, killing the grass and the field of flowers. Spiritual energy rises from the box and touches Adalind’s eyes that glow green. She has been accepted –now she has a lot dead flowers to gather.

Well that was pretty action packed. I don’t know entirely how I feel about the first episode containing so much of the last episode and then kind of derailing the big cliffhanger – Nick was going to be taken to Europe but… not. But still, they replaced it with a new plot line that worked.

I can’t say it really introduced anything for the story though. There’s no new developments, no hints of what’s to come, (unless Nick is going to be a zombie for the next 6 episodes). An opening episode really needs season hooks and this didn’t – except for Adalind, I guess. Still there was so much unresolved last season that I’m excited about this one – especially with everyone in the know and working together.

I loved Adalind’s stroppiness. This holy, evil, powerful ritual and she’s flouncing her way through it “really? Really? Now I’ve got to do WHAT?!”