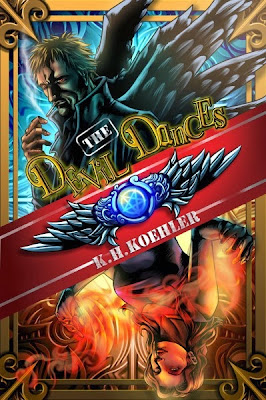 Nick’s tumultuous relationship with Vivian continues, much to Morgana’s disapproval – and seems to be getting serious. Especially after a mysterious, magical death in Nick’s arms leads him to investigate and gives Vivian the chance to have an almost-honeymoon for them.

But Nick doesn’t have much time for relaxing or partying when he follows the investigation – finding a vulnerable Amish community suffering a truly horrific predation at the hands of a terrible and powerful force. So desperate are they that they’re willing to accept help from him, Nick Englebert, Lucifer’s son and the next Lucifer.

As he investigates and battles the darkness, his own power flows; his father making frequent appearances to urge him towards ascension and one day stepping into his shoes.

I said before that this series is original and that is really well continued into this book. The nature of demons, the retiring Lucifer, exactly who and what Nick is coupled with the old gods, angel eaters, angry angels and an empty Throne all combine to create a really fascinating world with multiple angles and agendas. The idea of humans that ascend to become demons, Lucifer poking his son to do just that, is an excellently maintained one – especially with the very nature of Nick being developed so much more: what it means when people stick holy symbols in their faces and start chanting exorcisms, or their magic improving if people worshipping them – or Nick performing exorcisms simply by demanding demons leave because he’s the boss.

I love the idea of Angels being more than a little lost and aggressive with an empty throne – and I love that there’s been some real research into the nature of angels and not just presented as people with wings (which, if you read the original sources, is pretty divorced from the weird, wonderful and outright alien descriptions of many angels).

The angel eaters – those who eat angelic flesh and seek ascension to the empty throne are also a really good concept. I am torn as to whether they were necessary in this book, we had them in the last book and it was almost a distraction – but I think they maintain the ongoing meta as well as underscoring that just because there’s one thing going on in the world doesn’t mean there aren’t other things going on as well. I like the idea that the world doesn’t neatly line up one problem at a time or that everything else stops while you juggle something else.

I keep rambling on about the world – in fact if this review is disjointed it’s because every time I start writing I leap back up to the world building part to add another element that really appealed to me. But the story is really strong as well- we have Lucifer constantly poking his head in to try and get Nick to follow in his footsteps while Nick is moved to help an Amish community bedevilled by, well, deviltry, out of sheer compassion (I like that the demon is moved by compassion). Of course, when examining that evil we have twist after twist after twist, we have big guns that don’t work as well as expected, cocky demons learning that they’re not all that and the last people we expected turning out to be the big bad, interwoven with Nick’s complicated relationship with Vivian and the other people he invites to his bed.

It’s well written – with a much tighter and more succinct writing style than the first book. The ultra-dark film noir theme has gone, which means it doesn’t clash with Nick’s character any more – his personality now meshes with the books style rather than breaking it. We have a much better marriage of fun and darkness in the book and the story flows faster and easier because of it.

The portrayal of the Amish was interesting and nuanced. There was  both a good sense of their values without the almost exotifying element I often find – a presentation of them without the sense of pointing at the strange circus act. Their strengths and positives are clearly laid out – but nor does it flinch away from the prejudices levelled at, for example, gay people in Amish communities and how difficult it is to leave and just “join the English” when you have so little money or advanced education.

One major improvement for this book from the last is the treatment of minority characters. Nick’s bisexuality is much much better portrayed with his relationships and sex with men both as clearly presented as his sex with women and made clear that he values sex with men in its own right rather than as a display for Vivian. It’s a vast

There is still homophobia both in the town and in the Amish community – but that is a reflection of the homophobia that actually exists in the world and it would be far more problematic to cover it up and brush over it than to portray it and challenge it – as was done here. The homophobes were clearly in the wrong – and hypocrites besides.

In other positive moments, we have an acknowledgement of both Nick and Vivian’s abusive past and it is clearly cast as abusive and has left them with ongoing issues – as it should, it isn’t brushed over, it isn’t downplayed and there’s no suggestion of them enjoying what happened to them as there was before. They have misplaced guilt and self-esteem issues and other effects of the abuse – but this is part of the damage of abuse and not downplayed.

Vivian remains a strong and sexually positive character with her own lines and limits. She is cast as weaker than Nick and he does play protective of her – but equally she is resistant to any suggestion that she needs protecting and equally determined to resist him putting her in a box. She knows what she wants and is determined to get it and not afraid to give Nick grief when she doesn’t – and she has lines which, when crossed, she will completely shut down. Also, while she is weaker, it’s clear that this is a matter of unrealised potential rather than inherent weakness.

The member of the Amish community who as brave enough and sensible enough to ask Nick for help was also a woman – an old matriarch who wielded considerable influence and respect.

Still for all that, the big bad is targeting young girls for rape – directly to create mystical pregnancies.

There is still an element of Nick and Vivian’s sexuality being part of their demonic nature, but no directly link has been established so I’m happy to see them more as demons who happen to be bisexuals rather than demonic bisexuality.

There are POC in this book – but they’re mentioned from the last book, not really present in this one; it’s a pretty racially erased novel.

So, this book is one of those books that reminds me why I always keep going in a series. The first book was good but had severe problems and I have to say I wasn’t exactly jumping up and down to read the second. But I do give a series a second (or more) chance because it’s amazing what authors can pull off when they find their feet. This book is a perfect example – all the bits that didn’t fit, all the rough bits, all the questionable bits of The Devil You Know have been nicely sanded down to work smoothly with all those wonderful elements that I loved about the series in the first place. It works, it’s a great book – and I’m now eager for book 3.