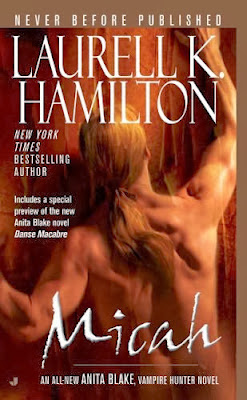 Firstly, a pertinent point about this book is it’s short – it’s about 100 pages long by my e-reader and a substantial part of that is a preview of Danse Macabre. This is normally where I insert my complaints about how I don’t like novellas, but I’ll pass on it this once.

But I will say if you are going to write a novella, you have little space to actually waste words – your words have to count. You can’t write an 80 page story and then waffle. Unfortunately, this book does waffle – partly with the standard over-descriptive style interspaced with an annoying amount of recapping (though, to be fair, both are far more restrained than is common in the series) and partly with it taking its time to get on with the plot.

We then have scenes that take too long, add very little and take up space: a sex scene to be exact. And there was the obligatory Agent who calls in Anita but can’t be professional enough to hide his obvious dislike (all these people who hate Anita, none of them capable of a veneer of civility) which means we have to have a longwinded rendition of Anita vs The Haterz that will only get worse from this point in the series.

We also have a lot of revisiting of Anita’s issues. Now I’m not actually against exploring Anita’s need to constantly sabotage her own relationships, being awkward for awkwardness sake and often fleeing into anger whenever she feels any kind of emotion because she’s terrified of anything that may make her slightly vulnerable. These would be interesting things to explore – but less so things to repeat ad nauseum. Exploration is not the same as repetition especially in a novella where we have limited space to actually develop things.

One thing I was eager to see was some development of Micah. By this phase in the books Micah is pretty much a short guy who is a wereleopard and has a really big penis. As one of Anita’s main men – growing ever more important – it would be nice for him to be more than the Giant Kitty Cock (there’s a mental image for you).

Of course, this being the Anita Blake Series, “development” means “big load of angst.” So we get Micah angst… about being a wereleopard (therefore a monster) and having a huge cock (and how this made dating hard).

Y’know it could be an interesting thing to examine that the much vaunted mega-penis of doom actually has a downside, that most women don’t actually want anything to do with a penis the size of their arm and that it’s very easy to be fetishized because of it. Except we had it used as another example of how Anita is better than all women because not only can she take the super ginormocock of doom but she can do it with minimal foreplay while so very very very very tight (as we were told at extreme length) because she is ANITA!

And it rather laughably failed to characterise Micah. Before we only knew he was a wereleopard with a huge cock. And now we know he has issues with… being a wereleopard with a huge cock. It rather lampshaded that this is the entirety of this character – this IS what Micah is to such an extent that even “developing him” has to revolving around these 2 aspects of his… I won’t even say personality because they’re not – his anatomy.

But why-oh-why did Anita’s powers act up (something that is neither relevant before or after this book) necessitating her to grope Micah in the middle of a court proceeding? Did we need that? Really?

I don’t appreciate that Anita and Micah are worried about leaving Nathaniel behind since Asher has seen him and likes him. Asher has never given any indication that he would sexually assault Nathaniel or anyone else. Anita is regularly poleaxed by Nathaniel’s amazing beauty. Nathaniel is attractive; Asher, a bisexual man, has noticed. That doesn’t mean he’s going to assault Nathaniel – that’s offensive and homophobic.

We have a return of Agent Franklin, a Black FBI agent, (who hates Anita) and a new FBI Agent who is Native American and pretty decently used to address the idea of confining Native American officers to Native American issues (many minorities can attest to similar treatment – either tokenistically or through assumed authority) and the universalising of the very different Native American tribes.

Micah has elements to it that are nice to see – Anita working, Anita raising zombies, Anita solving a case, albeit a small one. Parts of it are a shout back to the wonderful things that the series used to be. Unfortunately there’s too much laid on top of that that just doesn’t work. It’s more a taunt of what could have been. For that might have been I give it 2 fangs - a generous 2 fangs. Its shortness prevents it being even more overwhelmed than it is