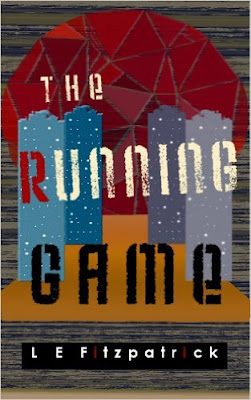 Rachel is always ready to run – she’s a Reacher, born with special powers and always hunted by the mysterious Institute. Always hunted, always funning – always ready to hide even in this broken England, brought down by economic disaster and war.

I really like this vision of dystopian England – one brought apart from financial collapse and repeated wars that have brought the country down. It hasn’t produced a complete wasteland – but it has produced a very British seeming wasteland

The government and wealth has concentrated in the south east – as the government collapsed they’ve focused on the south east and left much of the rest of the country to fall into ruins torn by war (as a Yorkshireman I am manfully resisting snarking whether this is a dystopia or contemporary. Yes yes I am). London is still relatively wealthy and stable – but has carefully isolated itself from the shanty town around it, fencing it in and creating a lawless, corrupt land run by gangland. A gangland that could have come straight from the pages of an old British gangster novel – or gangster documentary.

I like how very very British the book is – some books have an excellent sign of time and place while others feel like just a name put on a generic setting. This is England, beyond doubt.

And I love how this whole underworld plotline works. The almost cartoonish characters, each with their own agendas and motives which makes for a wonderful story of doublecross and not quite knowing who to trust as everyone has secrets, everyone has their own agendas. On top of that we have a wonderful sense of the old guard under threat. These gangsters have seen their empire fall apart and are desperate to rebuild it – but to do so requires desperate measures and a whole lot of paranoia. Everyone – from the Smith brothers trying to recover from their loss, to Pinky trying to rebuild his empire to Rachel trying to rebuild her life – everyone has lost something and everyone is trying to rebuild. Thematically that sense of decline and stress is really excellently conveyed.

For personal preference I would have really liked more to be made of the Reachers – these humans with special powers. What exactly are they and what exactly is the scope of their powers? Beyond the fact they have them what exactly are they? In some ways it’s interesting because the powers are used as a major plot point: they’re valuable and can occasionally do the odd shiny power thrown in, far more is unexplained than not. I think that’s because it’s not supposed to be a book all about the shiny powers but about the powerful characters – with the powers as a plot point driving them more than an integral part themselves

What I find very nicely done is what having a Reacher who can read minds in an organisation represents. The ability to read minds, to continually violate people’s privacy doesn’t create trust - it destroys it. To be so utterly untrusted, to have no space for themselves destroys organisations. I appreciate the psychological nuance of that.

Diversitywise, one of the protagonists is disabled and a drug addict… and for the first part of the book I did celebrate that. Except, once he managed to get past his depression (which he happened in one inspiring moment), everything else seemed to fall aside as well. Originally he could barely move because of the pain and his bad leg. But this all seems to just go away which is kind of depressing. It’s a trope to have an addicted and/or disabled character who can shed those when it gets in the way

Racial diversity is difficult to put my finger on because all of the characters are so sparsely described, it’s nearly impossible to pin down actual race of any of them. There’s one character whose description is implied is a POC by his hair texture – but it’s all so vague. I know a lot of authors do this and claim it’s a way of making everyone in the book “any race” but it completely ignores the whole point of societal default. There are no LGBT characters

Rachel is an interesting and powerful female character – not just in terms of her woo-woo but in general as well. She makes her decisions, she resists any urge to bundle her off and “keep her safe”, she makes her own firm decisions, she is determined to live her own life and she is damn good at that. I really appreciate it – I also love the moment when she kills a rapist and Charlie tries to treat her like a delicate little fainting flower and she sets him down hard. She is a doctor, she is not delicate.

There’s also Riva who, despite facing domestic violence, pretty much outmanoeuvres nearly everyone around her and of all the people whose lives have collapsed, she is the one who is still thriving.

However it has to be said that Charlie’s whole motivation comes from a fridged woman.

In the end I really liked this book – I loved the world setting and really love the characters – I’m so looking forward to seeing them all expand further. Even better – this is a series that can only get better with all this awesomeness already established – bring on the next book it only goes up from here!