It's All Mommy and Daddy's Fault 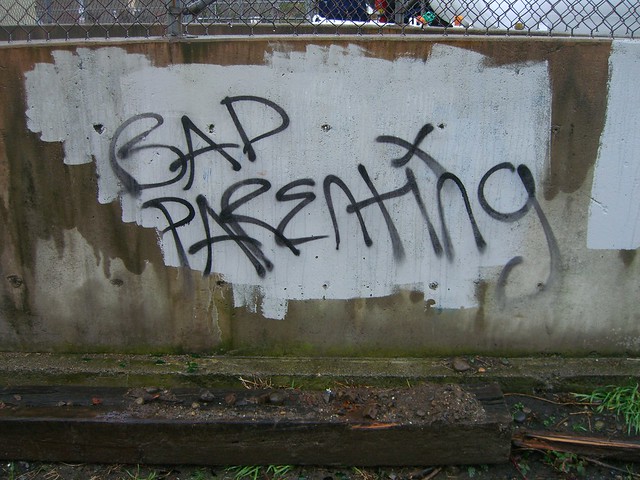 © 2007 Jason Taellious, Flickr | CC-BY-SA | via Wylio
Our first influences in life are our parents. Along the way, perhaps, our teachers, pop culture or friends also weigh in to change our perspective in life but our parents usually have the longest and most dramatic hold over us. It’s hardly a surprise then that when it comes to speculative fiction that parents have become a recurring trope in many ways. We have discussed dead mothers and absent fathers ad nauseum but what we haven’t looked at is the placing of blame for horrendous actions on one’s parents. Yes, really, it’s a thing I swear.


For me, perhaps the most pervasive example is Klaus from The Originals. Klaus would have us believe that were it not for the fact that he is the child of an affair and that his parents were so cruel, that his artistic soul would have soared through the stratosphere and he would have given the world great works of art to cherish forever. Clearly, he hasn’t looked at his own art. There’s no doubt that Mikael was an abusive parent but none of Mikael’s actions explain and or justify Klaus’s bloodlust. Sure, Esther lied to Klaus repeatedly but does that give him the right to control every single woman he interacts with?

Klaus has even started to get counseling for his mommy and daddy issues with Cami. I’m not knocking counselling but let’s stop and think for a moment about the fact that Klaus is 1,000 years old. The events that he is most upset about happened a millennium ago. There’s holding a grudge and there’s blaming mommy and daddy because you don’t want to take responsibility for your own shit.  I think that we can agree that Klaus easily falls into the later. He repeatedly uses his pain and his damage to make himself more appealing to women. It has just become another weapon in his arsenal, no matter how many times he gets all teary eyed and tortured artist.

Jafar  from Once Upon A Time in Wonderland is quite similar to Klaus. Jafar entered his father’s castle under false pretexts and worked as a servant for the Sultan for quite some time. After Jafar revealed his true identity, Jafar’s father not only abandoned and rejected him, he ordered Jafar to be taken out with the garbage.  In this moment, Jafar swore revenge and turned to the dark side. To that end, Jafar would kill, deceive, steal and torture until finally he had his father in his grasp. No matter what evil he did, Jafar could not come to any kind of closure about his parentage.  In fact, his greatest wish was for the Sultan to call him son, a wish that would be denied repeatedly. Jafar is actually willing to rewrite the entire rules of reality to compel his daddy to love him, no matter who he destroys or what suffering he brings.

Then you have people like Rumpelstiltskin, who hit the Daddy issues from two sides of the equation. Rumplestiltskin’s father is Peter Pan and Pan is certainly not the friendly, childlike creature that we first met in Barry’s books. The Pan in Once Upon A Time, is angry, calculating, evil and willing to sacrifice anyone to get what he wants. Sounds like Rumpelstiltskin is a chip off the old block doesn’t it? To his credit, Rumplestiltskin does blame some of his decision on his cowardice and love of power but he does suggest that at least an element of his ongoing problems are based in his daddy issues.

“I wanted to look for you, but I was too afraid that you wouldn't forgive me because I never forgave myself. There hasn't been a day that's gone by that I don't regret having left you.”

Rumplestiltskin constantly invokes Baelfire and connects it to his shame but Baelfire never really serves as motivation for real and lasting change. Ultimately, what Rumpelstiltskin wants to do is to do all the heinous things he desires, exercise his power, and manipulate everyone in sight, all while whining about his failure as a father to garner sympathy or claim justification. Baelfire is like a trump card that Rumplestiltskin pulls out of back pocket when he needs to humanise himself. Oh he has Daddy issues but they are convenient Daddy issues.

In the context of the Once Upon a Time universe these parental issues have actually led to the whole plot, Regina (and her own Mummy Issues over Cora!) creating the curse, Zelena learning magic (more Mummy Issues - ok her issues are primarily jealousy towards Regina but that ultimately stems from Regina being the child Cora kept), the world being torn by magic and war is all caused by these mummy and daddy issues. Even Killian, our oh-so-sexy pirate has recently been given his own packet of daddy issues to add to the set.


Really, Once Upon a Time would have no plot at all if they just employed a couple of very good family therapists. For that matter, the only plot point on the Originals would be how to decorate for the next big party if the Original family ever sat down for some nice family therapy at some point in their thousand year existence.


Ryder from Into The Badlands’ theme song should be “I just can’t wait to be king". All of his life his mother Lydia has been trying to prepare him for this role and his father Quinn has countered by making it clear that Ryder is not fit to lead. Ryder constantly goes behind his father’s back to deal with the Widow and each and every time he makes a decision on his own it leads to disaster. Hidden in the silence between father and son is Ryder’s ongoing failure. Ryder can’t even have a woman to himself because Jade is set to marry his father.  The one thing that is certain is that Ryder will continue to screw up. Yes, Ryder wants to be Baron but even more than that he wants Quinn’s approval.


Sometimes, as in Lost Girl, Daddy issues aren’t about explaining horrific behaviour but as a way for writers to deny the fact that they really don’t have a plot. How long exactly was Bo looking for her father? The issue is never that Daddy dearest was horrible because he was never really around. Bo’s Daddy issues are all about explaining her super special specialness and to cover for the fact that the writers had run out of decent ideas. Sometimes, it’s just a benign addition.


In fact, suddenly retconning in some parental issues when the writers are running out of an ideas is not uncommon in other shows - does anyone remember Guiseppe Salvatore being presented as abusive on The Vampire Diaries until the most recent series when we need a little extra angst for Damon and Lilly?


Ultimately, parental issues are not inherently wrong. As, we said, our parents have incredible influence on us and do very much shape the people we become. And, yes, their missteps, failures and outright malice can leave terrible wounds that may not ever disappear. We are not, not for one moment, discounting the power and influence that Mummy and Daddy issues have on a person


But the trope is overused - and it is overused as a plot device more than depiction. As a depiction, as an issue, parental issues, growing, healing, learning from them, dealing with them, living with them - these are important things to include and analyse because they are major elements of so many people’s lives. But these shows aren’t presenting these issues as important character elements to learn, grow from, surpass or explore - they invoke Mummy and Daddy issues as a lazy plot point


They’re very like the writers who throw in dead parents for some quick and easy “characterisation” (because there’s nothing like sappy tragedy to save you the effort of real development), Parental Issues are thrown in for both this characterisation and because they are the ultimate go to justification. You don’t need motivation to make sense or be logical because you can just drag out the terribad parents and it serves as a justification of everything. Returning to Once Upon a Time, does it make even the slightest sense that Killian would want to release all the Dark Ones from the underworld? No, course it doesn’t - but then we have some very belated Daddy Issues thrown in (and, really, this is the first time his dad is mentioned - it’s been so blatantly tacked on) and suddenly we have motivation! Klaus is still stomping around like a stroppy teenager after a 1000 years of life? Daddy issues! In some ways it works the same way as Manpain, or abusive Traumatised love interests. It’s not an issue to be analysed or explored - it’s an excuse to force any kind of motive, any kind of plot point the writers want to pursue


And this is where Mummy and Daddy issues become an issue - because we have yet another important, meaningful issue being overused and stretched into nonsense. It has become such an omnipresent cliche that it reduces the impact of when it is done well. Cain’s Daddy Issues in the Librarians are a nice example: Cain doesn’t act in a way that defies reason or explanation through his issues, nor are we expected to justify or excuse epic bad behaviour on his part because of them. His Daddy Issues have been a major part of his character, identification and history since the show began - this is how Parental Issues can be well presented, but it’s hard not to roll our eyes and just sigh past it as we see another character-struggling-due-to-bad-parents storyline breeze past (especially since it comes with the super-duper-fast resolve).

Email ThisBlogThis!Share to TwitterShare to FacebookShare to Pinterest
Labels: Into the Badlands, Once Upon A Time, once upon a time in wonderland, parenting, the Friday discussion, The Originals, The Vampire Diaries
Newer Post Older Post Home