Untamed (House of Night #4) by P.C. Cast and Kristin Cast 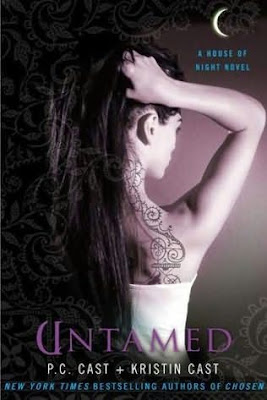 This is the part where I have to pretend there’s a plot to summarise… due to the machinations of Cyna and Mavrynthia and Merriska and I am doomed to reading 4 of these books, in 4 weeks.

There is not enough booze in the world

Ok, Zoey is feeling isolated with her friends turning on her – which is a problem because have several prophecies. One that predicts the rising of a dark and terrible force – and one which predicts Zoey’s death if she is alone

She needs to rebuild some bridges quickly

There’s another element of these books that is increasingly annoying me – the authors seem to think their readers are fools, blithering fool without a scrap of reasoning who need everything explaining veeeerrrryyy slooowly and veeerrryyy carefully and over and over to make sure it sinks in. This is why the book is so full of recapping, every element of the last book repeatedly hashed over not as Stand Alone Stuffing, but because the authors seem to have that little opinion of the intelligence of their readers. We see the same thing when the characters discuss a “cryptic” prophecy. The meaning of it is obvious, I mean really really really obvious. It’s impossible that any characters, especially purportedly intelligent characters, couldn’t have easily interpreted it in second. But instead the characters describe it and work it out in ludicrously excessive detail to explain it to the readers – there’s no assumption of even basic reader intelligence to work things out on their own or even realise the obvious. It had to be spelled out step by step in ridiculous detail.

And can we address that element as well? Nothing happens! Not until the very end of the book when Zoey and gang finally bravely run away. All through the book they just kind of hang around and mope. I would say they were developing their relationships or resolving conflicts or making plans – but none of that is true. Because they don’t.

It’s not like there AREN’T conflicts but they don’t take effort to resolve. All her friends hate her? That takes two paragraphs to resolve. Aphrodite doesn’t know where she stands? A paragraph. A prophecy to interpret? Takes pages but zero effort. We have a trip to a feral cat shelter which achieves… well… nothing, it’s just there. We have lots and lots and lots of circle casting with little achievement. Hand wringing about Stevie-Rae without any real advancement or thought. There’s no effort or drive or difficulty it all works out

Part of which is due to Nyx, the Irritable Bowel Goddess. Whenever Zoey has a choice to make or a question to answer or needs reassurance or surety then Nyx appears. Bodily manifesting this time along with all the feelings she gives Zoey whenever she has any questions. What’s hilarious is that this book also has Nyx talking about free will – but Zoey has no decision making agency of her own, she exists to be a puppet to the goddess who then draws the line about intervening elsewhere.

And while I’m on terrible plotting and this weird weird goddess and her idea of gifts – let’s look at Stark, Zoey’s newest love interest with his completely ridiculous archery power. His “gift from the goddess” giving him the magical power to always hit what he wants to. And by “want to hit” what it actually means “whatever cryptic nonsense that a malicious trickster can twist your words into.” Here’s an example – Stark wants to shoot the centre of a tree. Another word for centre is, kind of, “heart”. And in some mythology the “heart” of a tree belongs to a creature of being near it. So guess what he hits? That’s not a super power, that’s a bow possessed by Loki. Every time he draws an arrow it’s completely random whatever he will hit

For more hilarity - not only does he have NO CONTROL over what he hits since any passing thought can have his power decide "hey, you're hungry? You wouldn't be hungry if my arrow went back in time and KILLED YOUR MUM! MUAHAHA" or some other nonsense but he is also compelled to practice his archery. Not only is this sheer evil, but it's laughably pointless - if you have the woo-woo power to NEVER MISS then practice is redundant.

For added nonsense - Zoey keeps calling the forced love interest "mysterious." Despite the fact the guy info dumps his entire life story within 2 pages of meeting him. This is not mystery. It does mean the inevitable I'm-not-spoiling-but-do-you-care? tragedy that hits can be ALL ABOUT ZOEY'S FEE-FEEs. Oh screw spoilers, the man confesses his damn adoration for Zoey on his death bed after two days. Two. Count them! One, Two, Love, Dead. Gods give me patience because if you have me strength I'd break something

Now to an element that isn’t entirely awful. By introducing the friendly nuns the series has established that not all People of Faith are the gross caricature it’s a nice attempt at nuance. Of course, nuance would show a people willing to accept/tolerate others without having to incorporate their religion into an aspect of yours (the nuns see Nyx and Mary as the same). Nuance would also examine the idea of someone being personally accepting while being part of/supporting/championing/advancing an organisation that is still brutally opposed to you. But I don’t expect nuance from this book and, by its standards, this was a good thing.

Unfortunately the nuns also show part of just how terrible this book’s plotting and reasoning is. So she’s found a nun who doesn’t hate vampires and decides that this is clearly the woman she will call when she needs someone to protect her grandmother. Her grandmother who may be under attack by vampires or spirity-solid raven monsters while helpless. So… why call a nun? This is Zoey who regularly calls on fire to burn her foes, wind to blow away this terrible writing and water to wash away all memories of these terrible plots – why would she turn to a this nun for help? I’m not saying a nun can’t protect herself- she may spend every night as part of a secret underground bare knuckle fighting ring. She may be a champion markswoman who enjoys sniping international terrorists as her role as a secret agent. She and her fellow nuns may possess special rosaries allowing them to transform into Sister Mary Voltron. Any of this could be true (and I think I’d much prefer reading a book where any or all of them were true) however we have no indication that any of it is true or that Zoey has done anything other than choose a woefully inadequate bodyguard.

This is before we even consider why this nun decides to put the powers of Sister Mary Voltron in Zoey's hands after, what, 2 days vague acquaintance? The power of Mary Sue compels you!

Another element that isn’t entirely awful is Aphrodite. She’s still awful, she’s still a caricature of awfulness, classism, prejudice, judgmentalism, pettiness and general awfulness – but at least I can understand a tiny shred of her awful because if I had to spend any time with the “nerd-herd” I would also lose all faith in humanity and want to stab things repeatedly in the face. Honestly, they exist entirely to be slavish sycophants who fawn and worship her every word. Of course she’s also grossly racist and throws out such fun lines as “good illegals are hard to find.”

Erik has gone from bland boring blah love interest to hateful jealous slut-shaming abuser (and this book loathes any woman who doesn’t have their legs welded together with proper virginal rectitude). So we can stop being bored by him and start loathing him.

In addition to the loathing of any and all women who aren’t Zooey (and even she gets attacked for her terrible “ho-ish” thoughts), the depiction of any and all minorities continues to be awful. We continue to have desperate, ridiculous praise of any man who doesn’t scream hatred and violently attack any gay man. Because not being a violent homophobe is so wonderfully praiseworthy.

I’ve lost count of the number of times I’ve highlighted the gross and ridiculous caricature stereotyping of Damian and Jack, the gay characters in his book – from the times they’re called “sensitive” (not because they are sensitive, but expressly because they’re gay – it’s all linked to them being gay). Their obsession with clothes and the horror of staining said clothes, and of course Zooey is happy to out them to complete strangers on first meeting: because that way they can see if someone is a violent homophobe. You would think Damian and Jack would get to make that choice, not Zooey. It’s really awful

POC continue to be described in extremely exoticising terms – Shaunee is still described like a Starbucks menu and exists to be the sassy Black women from central stereotyping only exacerbated by Erin, who has exactly the same Sassy Black Woman personality – only is White just in case Shaunee didn’t make you want to rip out your own eyeballs on their own. And we have Shekinah, the wise, mysterious, exotic High Priestess, a WOC. Now, it is possible to describe a WOC in a more exoticising, othering way than Shekinah was described. I'm sure. Ok... fairly sure. Anyway, mysterious, exotic Other with the Exotic Voice is all mysterious and powerful – and after a little while playing Oracle she… ceases to be relevant.

And then we have Zoey’s Cherokee heritage and her grandmother – or as I think of it The Source of Woo-Woo. They only time Zoey being Cherokee is raised up or becomes relevant is when we have some woo-woo to talk about – it’s all about the woo-woo. Native Americans being purveyors of magical insight and powers is a pervasive trope. There’s no real development or inclusion of her heritage except when it’s a convenient source of mysticism. I really really want to see a Native American accountant. Or actuary. Something similarly mundane and completely lacking in anything resembling spiritual woo-woo doled out to the cast.

General language use continues to be awful – ableism abounds, misogyny loves to fly it’s flag (skanks, hos bitches and sluts abound). And even Aphrodite being accepted into the group seems reliant on her repeated bouts of self-flagellation before the supreme altar of the almighty Zooey.

To top it off, this book continues to get oppression so badly wrong. While it tries to look at how being invisible and separate can lead to oppression, it’s shallow and doesn’t go deeper than that – especially not when it comes to addressing exclusion. And it all fails because EVERY famous person ever – actors, playwrights, authors, musicians – every last one is a vampire. All of them. You cannot be a marginalised oppressed group which is completely separated from larger society and have a COMPLETE STRANGLEHOLD on the world’s media. You don’t get to be the supreme rulers of culture AND oppressed, it doesn’t work that way, it can’t work that way. It actually reads more like vampire control and dominance with humanity fighting to be free from their elite masters.

It will shock no-one that this book is, basically, terrible. The almost sad thing is that we get teeny tiny almost bits of improvement, then dump awful all over them until they are truly beyond saving. To rub salt in the wounds, I would lay odds that the author thinks this book is progressive and inclusive because of the minorities within it – despite every second of their appearance being utterly cringeworthy.