The Originals: Klaus and his Vagina Collection 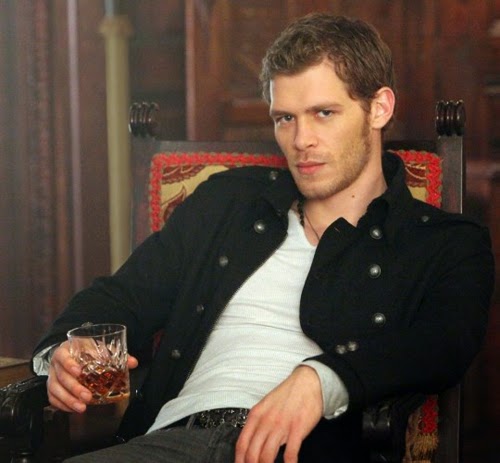 On the Originals we have a number of female characters - both plotting against the Original family, and the eternally troubled Klaus in particular - and working for them. And, of course, sharing Klaus’s bed. These women need to be careful, though, because there’s fine print - get too close to Klaus and you may become his chattel. And since he’s one of the most powerful creatures on the planet, how free are these women to reject him and his claim?


We have been complaining  about the portrayal of Rebekah Mikaelson since early on in her appearances on The Vampire Diaries (TVD).  Over time, we have seen her backstory on both TVD and The Originals.  There has been one long running theme to Rebekah’s past - she is not free.  Rebekah is not free to fall in love and she most certainly is not free to have sex. You might  think that a 1000 year old female vampire might just be able to make competent decisions about what do with her vagina but according to Klaus Mikaelson, you would be wrong. Klaus spends an epic amount of time either killing Rebekah’s suitors, or scaring them away. This, of course, is done under the guise of love because what good is a patriarch for if he doesn’t keep the family vagina pure? No man can possibly be good enough for Klaus’s little sister and while he projects this as a sign of his high esteem for Rebekah, it is really just the same ordinary patriarchal desire to control female bodies that has been going on since the beginning time.


That his infatuation with his sister’s genitals is downright incestous is ignored. No, that would be creepy, so instead it is wrapped in sexist justifications that reduce Rebekah’s personhood. Klaus is just intense when he loves people and because he believes that he is protecting her it’s deemed okay and it is further troubling because, as Klaus is the protagonist of The Originals, the audience is expected to see his POV. Yes, Rebekah continually rebels and she talks about wanting to be in a loving relationship and even raise a child some day. What Rebekah doesn’t do is simply express a desire to get laid. Casual sex is something the males of both the TVD and The Originals can and do engage in sex without much direct consequence. When Rebekah seeks a partner it is almost always about wanting a relationship. At times it reads as justifying her sexual desire as chaste enough in the hope that Klaus will break down long enough for her to get her groove on.


What is further galling about this whole situation is that Rebekah has come to accept Klaus’s policing of her sex life. When she finally confronts Klaus about his policing, it’s not because he has no right to control her sex life - but because his standards are too harsh and limiting. She doesn’t think he should have no say in policing her - he just needs to be more relaxed about it, less exacting. She doesn’t question his right to make those decisions for her - she questions whether he’s making good decisions.


The second blonde in Klaus’s life is Camille. Klaus was introduced to Camille by Marcel and from almost the moment he meets her, Klaus manipulates her. Klaus uses compulsion to force Camille to date Marcel, messes with her memory, forces her to provide counselling and, when things begin to look like they just might get rough in the quarter, tries to force Camille to leave New Orleans (it’s for own good, love honest.)  Somewhere in the middle of all of that manipulation, Klaus decides that he must police the vagina of another grown woman. And what does Camille do about? Why she panders to it and justifies it of course.


Prior to Rebekah leaving the show, Camille was a fairly independent character who fought back against Klaus’s manipulations every chance she got. The moment Klaus got down to one blonde, there was an instant transfer of vaginal rights to everyone’s favourite vampire patriarch. This manifests after Camille decides to sleep with Marcel in a drunken binge. She is absolutely clear that she doesn’t regret her decision to sex; however, instantly becomes concerned with how Klaus is going to feel about this. Why would a woman who has been so abused by a violent man have concern with how her abuser feels about her decisions regarding her own body? I’ll tell you why - the writers have deemed Klaus’s penchant for collecting vaginas to be non problematic.  Klaus’s vagina collection has become such a thing that Genieve wounds him by informing him of Camille’s night of passion with Marcel. When confronted, Camille doesn’t tell Klaus that her sex life is none of his business but stands silently like someone admitting guilt and feeling shame.


On their own, the issues with Rebekah and Camille are terrible but when you add in that what they have in common is Marcel, the policing of these women takes on a racial element. Marcel knows good and well that both Camille and Rebekah have been declared Klaus’s possessions and he pursues them almost to the exclusion of all else. Each time, Marcel is told that he must back off by Klaus based on the idea that no one is good enough for them. Keep in mind that Klaus essentially raised Marcel from childhood and changed him into a vampire but somehow, Marcel isn’t good enough for Klaus’s blonde collection. The visual presents as a White man (read: Klaus) saving White women (Rebekah and Camille) from an overly enterprising Black man, who just doesn't know his place. That Marcel has only been linked romantically with White women enforces that White women represent the epitome of  womanhood and must be possessed to present an image of competent, virile masculinity. This further reifies Rebekah and Camille as possessions and paints Marcel as a lascivious sexual monster who good White women must be protected from.


Then there’s Hayley. Hayley slept with Klaus once and became pregnant with his super-special miracle baby. For far too long, this had the effect of reducing Hayley to the mystical womb, carrier of the Mcguffin everyone wanted to get their hands on - a prized incubator more than a person. And that definitely included Klaus who certainly didn’t value Hayley for any other reason than the foetus she was carrying - and in the name of that dished out orders, limits and near imprisonment to protect his investment. It has been a particular relief to see Hayley finally begin to step up and be a Queen for the wolves.


But even in her new found dominance, that “Owned By Klaus” label attaches. This time coming from Elijah - who was staying away from Hailey because he respected Klaus’s “intentions”. Klaus has shown zero interest in Hayley - and Hayley has returned a similar level of disinterest in him - a mutual dislike that has been more than clear on multiple occasions that Elijah cannot possibly have missed. Equally unmissable has been Hayley’s deep connection with Elijah and her clear interest in him… but Elijah has backed off - despite his and Hayley’s desires - for the sake of Klaus’s claim? Never mind that Klaus has pursued relationships with Caroline, Camille and Genevieve - Hailey is his baby carrier!


Even when Elijah finally decides to pursue a relationship with Hayley, it’s not because he realises Klaus has absolutely no say in who Hayley is with - no, it’s because he is angry with Klaus. He isn’t denying Klaus’s claim - he’s just refusing to take it into account; but Klaus’s ownership is acknowledged even as it is ignored.


The trope of women as possessions of their men is ancient - for huge parts of history women have been little more than extensions of their menfolk, not full people, but property to be owned and controlled. It’s one of those elements of misogyny we like to pretend is now buried in the distant past - but it still raises its ugly head in repeated ways and one of the most common elements is the policing of female sexuality. Preventing women from controlling their own bodies, their own sexuality is a classic element of this trope that will not die. It is often normalised in the media and supported by story elements that seek to erase the just how misogynistic this is. Klaus is yet another in the assembly line of anti-heros which has become popular recently and so while the viewer is meant to sympathise and deplore him at the same time, they are never given specific direction as to which of his actions that are meant to decry. It is specifically because his policing is justified through love that it appears harmless. And when, in turn, the female characters don’t object to Klaus’s policing and claims of ownership it normalises his actions.
Posted by Sparky at 9:00 AM