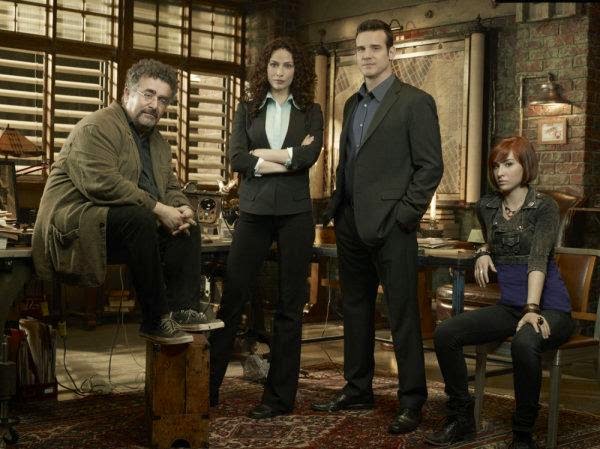 Previously, on Warehouse 13, Myka had cancer, Pete was silly, Mrs. Frederick is no longer Caretaker and Paracelsus, super powerful super guy who is also evil (but he’s played by Anthony Head so we’re all kinda on his side because, Anthony Head you magnificent bastard, you) now is. Claudia, future caretake and now real Caretaker throws down for control of the Warehouse. Oh, and Claudia’s sister is alive which is somehow relevant.

Claudia and Paracelsus face off. “You are the Next”. “You are the Past”. Which is epic and awesome and we may have to end the season right here because those lines will not be beaten. They both throw awesome powers at each other, the Warehouse protecting Claudia and giving her super powers.

Problem. Claudia is part of the Warehouse so he cannot kill her. But if she’s part of the Warehouse, he can control her – and does so like a little puppet. He uses an Artefact to steal all of Claudia’s knowledge before using her to help put together a diabolical scheme involving several Artefacts.

At the hospital, a worried Pete catches up with a newly released Myka who is relieved because her cyst was benign –not realising her cancer has been cured by Pete making a naughty deal with Paracelsus. Which he doesn’t tell her when he explains the whole losing the Warehouse and creating an evil god thing.

Mrs. Frederick has zoomed off somewhere to find the Regents (who are conveniently far away to stop her being around and being awesome all over everything) while Artie and Jinks try to break through the shield on the Warehouse ineffectually but in a highly amusing, random and very Artie fashion (poor Jinks). Artie does have an idea on how to bring Paracelsus down – the arrow that killed Achilles.

Myka arrives and scolds everyone for not reading the manuals, the updated guides and the footnotes like she does (Artie’s excuse “I have a huge backlog after I turned evil and tried to poison  the world.” Jinks and Pete admit he has the absolute best excuse). Having activated the fail safe (that was in the manual) the gang can just walk through.

Inside the Warehouse they split up with Artie and Myka working to disconnect Paracelsus from the Warehouse (Jinks warns Myka about Artie’s habit of using people as guinea pigs for his dangerous experiments. Poor Jinks) while Jinks and Pete are on distraction duty (I say again, poor Jinks).

Pete causes a little chaos which he is very very very good at – so Paracelsus sends Claudia with a bazooka (and lots of apologies. But mainly a bazooka. Because Paracelsus is a magnificent bastard). It’s several kinds of awesome

Myka and Artie follow his plan to use mirrors to fix the mystical woo-woo basement so it can be super awesomely decorated with glowing runes again. (“It is not an exact science.” “I know, I miss exact science”). Their plan works (power of Artie grumpiness!) and the room looks awesome again.

Paracelsus is depowered and Claudia is free from the murderous rampage. Despite having lost, Paracelsus seems quite happy, especially since the episode has barely started yet so there’s way more to come.

Claudia shares the evil master plan, taking H. G. Well’s time machine and numerous other Artefacts all to do with time travel. Maybe making an actual working time machine. They rush after him playing with various Artefacts – but he jumps through the portal with a classic evil laugh (because he’s a Magnificent Bastard)

The entire Warehouse transforms. Around them are banners pointing to Paracelsus as being caretaker of the last 5 Warehouses. He has dramatically changed the past – and the present. Artie has the somewhat calming news that while Paracelsus changed some things, history remained broadly the same – the same Warehouses came and went which means the same Empires and great powers rose and fell as did in the real world (Ottoman Empire, Mughal Empire, Russian Empire, British Empire, USA). The new motto is “Science is Everything” (Pete comforts Artie on the death of his Steampunk. Artie “I want him dead.” The loss of Steampunk is the last straw!). They all have an Artefact which allows them to step outside the shift, given just before Paracelsus jumped through the portal

Claudia also discovers that the science is way advanced to what they are used to. Oh and the second half of the motto is “the end justifies the means” and they remember the many many many people Paracelsus happily slaughtered for the sake of his experiments… so who knows what horrendous things he’s done over the centuries. Claudia and Artie snark about what to do next until Claudia pulls the “you lied about my dead sister” card which is apparently an Ace. Jinks, Myka and Artie stay to rebuild the time machine while Pete and Claudia go to find the central computer, the hub, and figure out exactly what happened and when.

Off they go and run into Borg guards. With Artefacts they’ve seen before that Paracelsus is actually replicating. And they’re lead by Crowley – err… Valda. But he’s alive in this reality! (This episode is going to reach critical mass for Magnificent Bastards).

The other three find a room where some of Paracelsus experiments are happening – torturous experiments using multiple Artefacts – which shakes Artie badly as a Jewish man whose parents were in World War 2, seeing what Paracelsus had turned his Warehouse into.

Claudia and Pete find the computer hub – Abigail. Paracelsus has turned a person into a computer.

They gang gathers together – Paracelsus went back to 10th June 1541 where he killed all the Regents of Warehouse 9; after which there were no more Regents, the Caretaker was unsupervised. They start the portal and send Pete and Myka back – but huge power drains and lots of alarms are tripped. Jenks and Claudia work to keep the portal open while Artie distracts the Borg Guards.

Through the portal they find a lot of dead people, including one Pete shot with the Achilles arrow (missing Paracelsus) and Zelena a very angry agent holding a blade to Myka’s throat. She’s Lisa Da Vinci, Agent of Warehouse 9. Yes, the granddaughter of Leonardo da Vinci. They try to wow her with talking about time travel, but since her granddad has been working on it for decades her only reaction is to be unimpressed by how long it took them to master it. Anyway, while Pete’s babble and his Prada shoes distract Lisa, Myka breaks free and grabs the knife. She still finds it hard to believe Paracelsus is the culprit, because this is the date he was encased in bronze.

She confirms their story with an Artefact (that shows us, again, that Paracelsus is a Magnificent Bastard). They hurry to wear the Regents are meeting and save them from Paracelsus using an Artefact to squish them (pre-purple-goo the Agents used giant purple birds, apparently).

In the present, Artie is captured and trying to appeal to Valda – and Paracelsus appears. I do like his line “use Artefacts as tools not collectiables” but not so much since “tools” means “torture implements”. Incoming 2 old Warehouse 13 stalwarts – Vanessa and Hugo. But as Artie rants about what a monster Paracelsus is, it’s clear Hugo and Vanessa agree with him but are trying to keep quiet about it because Paracelsus has their children; but Artie gets through to them with personal secrets that they never told anyone else.

Claudia heads out to rescue Artie, leaving Jinks to peddle a classic electric-generator bike (poor Jinks) and teslas Vanessa and Hugo before snarking about her dead sister again. Priorities Claudia. Alas, their distraction means they don’t notice Paracelsus, Valda and the Borg.

In the past, Pete catches Paracelsus, stabbing his leg with an Artefact scalpel he has (future Paracelsus gets a twinge in his leg, developing a limp? Or does his healing fail that badly? Ah time travel shenanigans) and growling about how Paracelsus used Myka’s life as a bargaining tool. Overheard by Myka of course.

Everything is back to normal, the gang meets up again, Abigail joining them, Mrs. Frederick is Caretaker again… though Claudia has an ominous sense of ominousness. And Abigail has been called to a clandestine meeting by the Regents. There’s more shenanigans from Pete – but Myka demands to talk and confronts him about him using Paracelsus to try and cure her when he thought she had cancer. She smacks him, she’s his partner, not his girlfriend, the Warehouse comes first and he can never risk the Warehouse and the world to save her.

And Claudia still wants to know about her not-dead sister Claire. And they’re missing one of the silverware – the Artefacts that lets them exist in alternate time lines and remember the original. Which is why an alive Benedict Valda, with the fork, is checking something out of the Vault.

Oh that was SO MUCH FUN! I forgot how much I missed this show! Not just the whacky antics they do so well, but how well the whole cast bounces off each other! They have the best lines, the best banter and the best fun! Oh Warehouse 13, how can this be your last season?

But Warehouse 13 has a naughty habit – they set up a BIG EPIC CLIFFHANGER at the end of the season… and kind of resolve it in 1 or, at most 2 episodes of the next season. Even if it’s fun, it’s kind of anti-climactic.

The Caretaker of the Warehouse had all these awesome powers, I’m disappointed that Mrs. Frederick was never shown with them (she was awesome and ominous in the background but still, there have been direct threats to the Warehouse that she should have responded to).

Lisa Da Vinci. Grandson of Leonardo Da Vinci. Oh… Leonardo didn’t have kids, he never married. Sure, he could have had illict affairs with women and had illegitimate children hidden from history – except he was gay so that is both highly unlikely and also very straightwashing AGAIN. Straight people love doing this to Leo for some reason.

Also “Da Vinci” is where Leonardo was born. It’s not a surname. Leonardo was illegitimate, he didn’t have a surname. Hey, it’s vaguely possible that a weirdly straightened-Leonardo had kids who in turn had kids born in Vinci in Italy and decided to take the place name as their surname and develop pointed English accents before travelling to Warehouse 9 in the Ottoman Empire… or it could be that the writers were badly in need of some research. Or an education. Or, y’know, wiki.

Speaking of – Warehouse 9 was in Constantinople, in the Ottoman Empire. Why are all the agents and Regents of this place White people in western European dress? I thought maybe we had a continuity error and this was Warehouse 8 – set in the Holy Roman Empire (Berlin to be precise) – but then why would there be an Olive Garden in the middle of Berlin? It could be that they’re all from the old Warehouse but the transition from 8 to 9 happened in 1518, 22 years before. You’d think there’d be some Ottoman Agents/Caretaker/Regents?