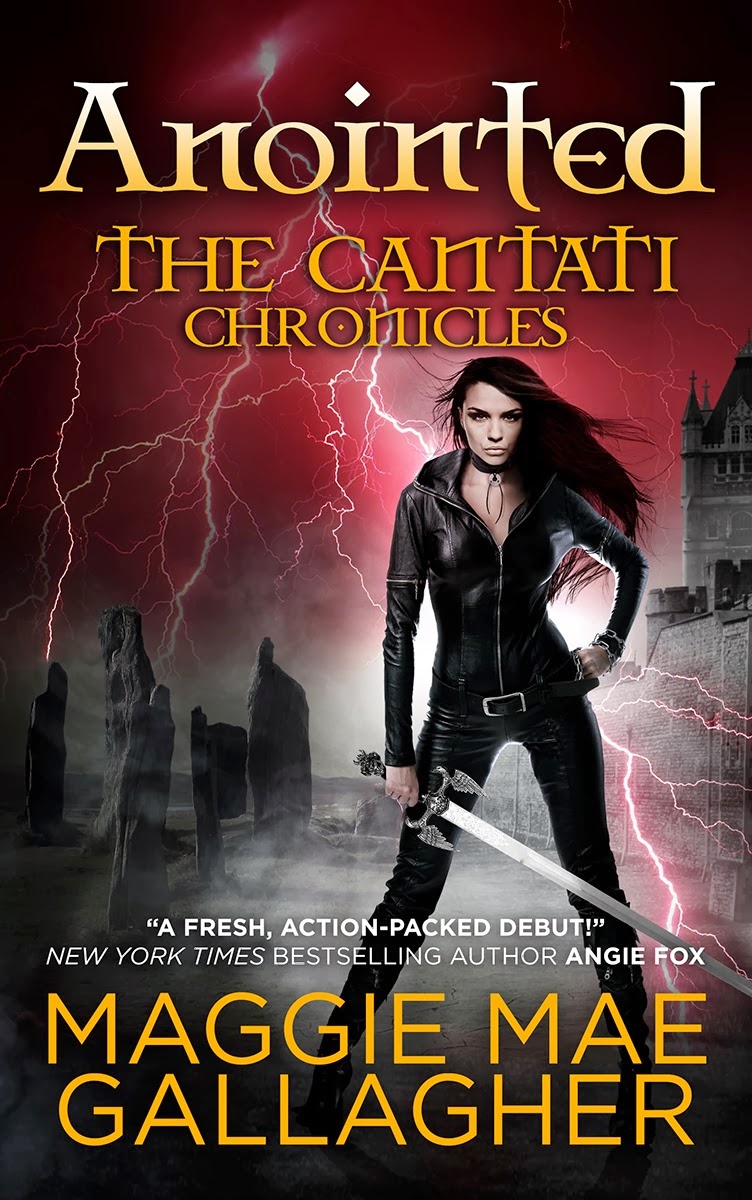 Alana is a Cantati, an enhanced magical human, one of the few who were born after the Mutari, when the demons broke down the barriers between their world and ours and unleashed their fury.

Now there’s only a few remnants of humanity left and she is one of their defenders – in the last days at the end of a losing war. Faced with extinction they have once chance – to send Alana back before the demons broke through and stop it, for the sake of humanity.

But when she returns to the past she finds herself with far less time than she thought she’d have and only a few cryptic clues to follow as the Mutari ticks ever closer. And there’s another figure, Gaelen, who knows about the demons and is looking for the same clues she is – but can she trust his agenda?

Oh dear, it’s one of those. Ok, before I sharpen my knives, it’s time to think of something nice to say. So here we go – the concept, the idea of demon gates giving people magic, of the different realms, of all the world building that was eventually revealed in painfully long info-dumps – is actually kind of interesting, This would be a fun world to play in and an interesting world to tell a whole load of stories with.

Alas, instead of those fascinating stories, we got this one.

This book is set primarily in the UK and mainly in London. Alana was born in London after the apocalypse (I can’t imagine travel was particularly easy in the dystopian world after the fact either). Yet she’s American… her accent is taken as American, her word usage is American, her thoughts point to an American… I find this rather bemusing

Almost as much as the Britain she describes. I would advise against ordering “biscuits” for breakfast in the UK, you may be served cookies. Or just be regarded with odd confusion. I don’t know where she’s finding Grand Central Station in London; London has over 300 stations, Grand Central isn't one of them. And I can’t even begin to guess at the accent transcribed here it’s like cockney meets Scottish with a side order of Dick Van Dyke – and it’s the same whether she’s in London or Scotland or Cambridge. She goes shopping in “malls” (not shopping centers), she manages to go into shops and stock up on guns quite easily.

The writing is also really clumsy – it’s scattered with hugely long winded monologues for the world building. Or because the author’s suddenly remembered that Alana has just watched everything she knows and loved die so we have a page or so of angry angst… then she gets on with things. It’s like flipping a switch, I can almost hear the author saying “oh shit, she’s supposed to be sad”.

We have some really rammed in staccato sentences and then some lines like this:

“With the dimensions open, humanity regained the magic that had been lost to the ages. This new breed of humans had been thusly named the Cantati”.


‘Thusly?’ Aside from freaky archaic word use, that would imply some explanation for the name – like the name would naturally follow from the explanation. So “thusly named Wizards.” Or Sorcerers. Or Magic Folk rather than a word that sounds like Italian singers.


There was not an ounce of skin, clothed or exposed, which did not fall under his gaze.”

…I don’t even know where to begin. Ounce doesn’t seem like the best measurement… and surely the clothed skin isn’t “falling under his gaze” (that line!) unless he has x-ray vision?

“Here we were, covered in demon blood, and I wanted to attach my lips to his, taste him in big, unending gulps until I had my fill.”

This has to be the least sexy way a kiss has ever been described in the history of literature. Even without the demon blood, it sounds like she suckers on like a lamprey and drains him.

If someone told me I would lose everyone before the day was through I would have laughed in their face,”

Um, you were part of a small remnant of humanity in a desperate struggle for survival. Your extinction should have been a laughing matter.

And that accent, provided by a taxi driver:

It’s not just the awful writing, Alana is a terrible character. Even making allowances for her grief and rage being reduced to random monologues or what this writing style does to her thoughts, she also has the personality of an inept honey badger in heat. She has one tactic – RAAAAAAAAAAAAWR CHARGE.

If it doesn't work? She does it again. Still doesn't work? And again. Still doesn't work? And again. The only time she manages anything resembling subtlety is when one of the other characters forces her into it. The worst thing about this is that she, Cantati warrior and, we’re assured, one of the best there is, then has to be rescued again and again and again and again – because she keeps charging in without thinking. In a moment of stellar awfulness, she charges in without thinking to rescue Gaelen and he ends up rescuing her – because her plan was literally “teleport in and hope there are no guards in the dungeon” there were. I am shocked. No matter how many times this plan fails she still refuses to make anything resembling a plan the next time she charges in guns blazing.

Also, if you’re going to set up Alana as super duper strong and impressive then why make Gaelen even stronger than her in every way? Why set up this female character who is basically entirely about her combat skills and then pair her with someone stronger, more skilled and more magical?

But this does bring us, with the inevitability of hitting the ground after falling from a great height, to the romance. Alana and Gaelen meet and both consume far too many pages of the book describing how utterly hot the other is. We have Gaelen’s boss drop in to make it a forbidden relationship because DRAMANGST (the end of the world wasn't enough it seems) but he falls in love anyway, abandoning his people and dreams he had held for centuries over a woman he’s known for less than a week. Of course he does. But then she, in that same time, decides to risk it all for the sake of rescuing Gaelen who she can’t possibly live without – after a week. We have to remember that “it all” in this case is actually the future survival of the human race who she went back in time to save from actual extinction – quite possibly making this the most selfish booty call in the history of romance.

And that’s saying something

But there’s more! This week was hardly spent with roses and chocolates. Gaelen fights her, threatens her, she thinks (well, insofar as anything this character does could be described as “thinking”) he has stolen her things, he speaks to her with utter contempt and even kidnaps her. But LOVE STRIKES. Even when he’s holding her prisoner and pressing her against a wall she thinks of his mesmerizing green eyes. Of course she does.

This book has no minorities in it. Given the givens, I think that’s something of a relief.

In all the plot was awful, the writing unintentionally comic and the characters pretty terrible. There’s some minor points to having a truly fascinating concept which may just scrape this book 1 fang, but the more I think about it – and how that world was delivered in a series of horrendous info-dumps, how I felt a vague sense of achievement and a vast sense of relief at actually finishing the book and the constant times I had to put it down and walk away because Alana doesn't have an ounce of sense in her head and simply runs on rage and monologues… nope, it would be unfair to the other books to give it more than 0.5 Fangs on the basis of a concept that could have had potential.