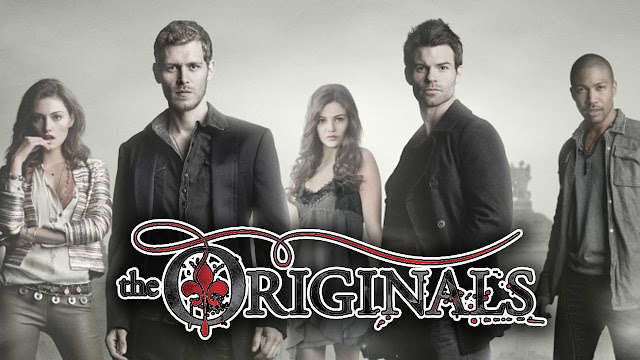 The plotting from last week continues with Aya and Aurora coming up with a dastardly scheme with Davina’s help and Marcel’s disapproval to destroy the sire bonds. Marcel isn’t a huge fan of this because the likely way Aya will test if the sire bonds are gone is to kill Klaus which means if Davina (a teenaged witch with not great decision making skills) screws up all of Klaus’s line dies – including him.

Continuing from the Vampire Diaries, we have a visitor to New Orleans – Stefan. He gets some nifty paste off Freya that will conceal him from Rayna so she doesn’t hunt him down and repeatedly stab him in the head. Or heart. Or other bad place.

Of course he isn’t entirely welcomed since the prophecy does say an Original will be taken down by their friend – and Stefan counts.

Still they’re distracted by the bad guy plotting which results in Elijah and Klaus being trapped in mystical dream world with Tristan and Aurora (it’s a dream world the Stricts made for Tristan so he wouldn’t suffer eternal drowning). How do they get there? Witches. I’m sure people just roll dice to see what powers the witches have. I mean, this episode Klaus and Elijah are both taken out by one witch with a hand wave and a brief line – but in Vampire Diaries Bonnie took a full three seconds of staring before Enzo knocked her out.

This results in lots of sniping between the two sibling teams with Aurora, of course, being attacked constantly for being mentally ill. Let’s not recap the endless sniping

Hayley, Camille, Freya, Lucien (who they picked up along the way) and Stefan need to ride to the rescue. This involves Freya rescuing her brothers by destroying the symbols that represent them (queens on a chessboard – representing the women they betrayed. Which is terrible because there’s only 2 queens on a chess board and there would need to be so very many more).

While the rest of the gang try to break in. The easiest way to do this is to sneak Stefan into the building and remove his masking paste unleashing a pissed of Rayna on the Stricts

In case there was any doubt before, Rayna is a scary scary scaery hunter and many many Stricts die

Elijah and Klaus waking up also puts a severe crimp in the Strict coven’s day, Original vampires are cranky when they wake without coffee. On Davina survives (whyyy?) – and she manages to complete the spell, de-linking Klaus from his sire line.

Can we expand on this question – why is Davina alive? Really? Why? The number of times she’s pissed off Original vampires should make her public enemy number one. Why is she not dead? Why is she not so dead that there’s not enough left to bury? Why don’t they take turns resurrecting her and rekilling her so everyone who has a reason to

I don’t mean this in a “I hate this character” kind of way (though I do) like I do with Matt on Vampire Diaries (who really REALLY needs to die) but because it makes zero sense for her to still be alive since she has gone against the Originals so many times. Especially given the inevitable fate of some characters

Which brings me to Aya. In the aftermath of all her plans going horribly wrong, presumably a huge number of Stricts being killed she is bereft and lost and talking soulfully to Elijah about past love, past betrayals, past secrets and all they lost. Elijah can’t kill her because Emotion. Hayley has no such compunction

And no matter what else this is supposed to mean, what we see is Elijah’s CURRENT white love interest killing his former, Black love interest. Don’t tell me this isn’t significant

The thing with Aya’s death is that, if I were an Original, I’d kill her too. I’d have killed her about 6 episodes ago (along with Davina.) Plot wise it makes a lot of sense to kill this constant, conniving threat to them. But there’s a problem in that THIS is the role so many Black people occupy in Originals. Meat puppets for white vampires, enemies who will (inevitably) be killed or put in their place or subservients who constantly have to dance around the dangerous Originals

“But Sparky,” I hear you cry “doesn’t everyone have to do that given the power of the Originals”? Y’know, if that were true I wouldn’t mind. But it clearly isn’t. Davina has a great big “get out of pissing of Klaus” pass for no damn reason; is pretty much allowed to do whatever she wants, is not really stopped and only faces consequences when her own damn fool decisions catch up with her. While Klaus has orbited around Camille constantly trying to control her, she has equally managed to thwart him and demand respect and Hayley – Hayley is, again, able to set her own path and even outright oppose the Originals. The problem is the closest thing we have to a non-white character who manages to walk this tightrope is Marcel – and even then he is constantly menaced and has to tip-toe around these vastly more powerful beings that threaten to kill him on a twice weekly basis.

In the aftermath, Klaus also seals Aurora up in a wall. Like Tristan’s long long drowning this is called “putting our enemies in a plot box so they can be pulled out in 2 seasons if we need them.”

Honestly, if I were an Original EVERYONE would be dead.

And Davina, who is not dead, finally uses some Klaus and Elijah blood to bring Kol back. Now the question is what exactly IS Kol? Witch? Vampire? Other? And is anyone going to question this millennia old vampire with a teenager?